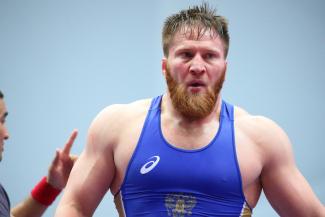 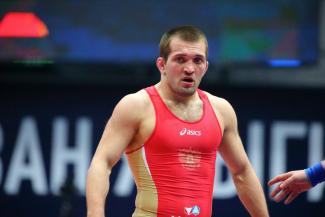 Other action on the final day of competition ended abruptly as defending champion at 65kg Ilyas BEKBULATOV (RUS) and the winner of the Golden Grand Prix Final in November, Magomed KURBANALIEV (RUS), were injured late in the morning session and defaulted in the medal round.

Kurbanaliev forfeited to 2014 Yarygin champion at 70kg, Israil KASUMOV, in the gold medal final at 65kg. Kasumov was, nevertheless, gracious in victory.

“I appreciate the honor of competing against these participants and hope that, if I’m lucky, to have the chance to represent us at the European championships (March 8-13 in Riga),” said Kasumov.

“My dream is to wrestle at the Olympic Games and I will try my best to achieve that dream,” added the 26-year-old from Krasnoyarsk.

At the non-Olympic weight category of 70kg, junior world bronze medalist Zaurbek SIDAKOV (RUS) scored a single-leg takedown midway through the second period and held on for a 2-2 victory on criteria over Khusey SUYUNCHEV (RUS).

Results of the semifinals and medal finals on Sunday: