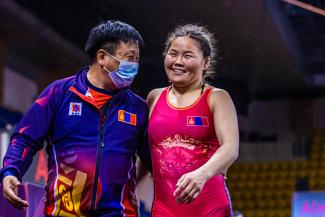 Bolortungalag ZORIGT (MGL) stopped an Indian gold rush on the final day of the women's competition at the Asian Championships with a stunning victory at 65kg on Friday that propelled Mongolia to victory in the team standings.

Zorigt, a three-time bronze medalist, moved to the top of the podium for the first time and denied Rio 2016 Olympic bronze medalist Sakshi MALIK (IND) her first-ever Asian gold with a first-period fall in the final at Almaty's Baluan Sholak Palace of Culture and Sports.

Even with India getting gold medals from Vinesh VINESH (IND) at 50kg, Anshu ANSHU (IND) at 57kg and Divya KAKRAN (IND) at 68kg, Zorigt's victory proved the difference as Mongolia edged India for the team title, 173 points to 168. A gold is worth 25 points and a silver 20.

"I didn’t know that we can be champions because of my gold medal," said Zorigt, who was noticeably smiling beneath her mask as she received her well-earned gold during the medal ceremony in the crowdless arena. "Now I know and I can’t explain how happy I am."

Host Kazakhstan, which picked up a silver and two bronzes, finished third with 156 points.

World champion Aisuluu TYNYBEKOVA (KGZ) captured the other gold at stake, cruising to victory at 62kg to regain the Asian title heading into the Tokyo Olympics and later acknowledging that the absence of her top rivals from the tournament took the luster off winning a fourth career gold.

Zorigt's victory showed just how quickly and wildly the tide can change in this sport. Zorigt had just worked out of a single leg attempt and, as the two came face to face, caught Malik with lightning-quick headlock throw to her back.

As Malik squirmed to break the grip and get loose, Zorigt abandonded the hold and flipped over to go chest-to-chest, and that was it for the Indian with the match ending at 1:51.

"It was a good final and the move is one of my favorites and I have used that before," Zorigt said. "It’s like my go-to move."

For Malik, the loss relegated her to a second straight silver medal and third overall, giving her a total of six Asian medals without a gold.

If any tournament was the one to finally strike gold, this was it, as powerhouses China and Japan, as well as the Democratic Republic of Korea, did not participate for pandemic-related reasons.

Vinesh and Anshu seized the opportunity by winning their maiden golds.

Vinesh, coming off a victory at last month's Matteo Pellicone tournament, made her eighth Asian medal a gold with a solid victory by fall over Meng Hsuan HSIEH (TPE) in the 53kg final.

Leading 4-0, Vinesh ran down a retreating Hsiech and bulled her to her back to end the match at 2:21.

"Everyone knows this is an Olympic year and it’s already my third competition so I am feeling good," said Vinesh, who earned a berth at the Tokyo Olympics by winning a bronze medal at the 2019 World Championships in Nursultan.

"I have participated in, I think, eight Asian championships, and for the first time I am winning a gold medal. I had waited for this moment."

Inspired by her senior compatriot's victory, the 19-year-old Anshu relegated Battsetseg ALTANTSETSEG (MGL) to a silver medal for the third year in a row by scraping together a 3-0 victory in the 57kg final.

"Vinesh won a gold, then you also feel like winning it because one needs to understand the feeling of being a champion," Anshu said.

Anshu scored all of her points in the first period, notching an early takedown with a snap down and spin behind before adding a stepout. That was it for the scoring, as neither wrestler could penetrate the other's defenses.

"In the final, I was not looking to attack much because I had wrestled the same girl before," said Anshu, who defeated Altantsetseg in a round-robin group match earlier in the day.

Anshu's victory came in the wake of qualifying for the Tokyo Olympics at the Asian Olympic qualifier held at the same venue last week, which led her to play it safe as she was also nursing injuries that caused her to default in Rome last month.

"I had a knee problem," she said. "The hamstring is also not good right now. I have been struggling with it since last month. So I just thought to not push much."

Despite the wear and tear, Anshu said she was able to wrestle relaxed, with the pressure of Olympic qualifying no longer a burden.

"In the qualifiers, my body was not responding nicely as there was a lot of travel fatigue and the weight cut was not planned," she said. "It was a tough week.

"In the championship, I was much more relaxed and I was wrestling freely. There was no pressure of qualifying for the Olympics as well. My father had advised me to wrestle how I wrestle in practice," she added.

Tynybekova was in control throughout the 62kg final, in which she methodically piled up points against Dolortuya KHURELKHUU (MGL) before scoring an 11-0 technical fall as time expired.

In the final, Tynybekova scored a stepout and a pair of takedowns in the first period. In the second, she used an unpenetrable defense to add to her tally, scoring four points on a pair of counter lifts after Khurelkuu shot in on a single leg, then nonchalantly ended it by scoring a 2-point exposure off a Khurelkuu takedown attempt as the clock ran out.

She later revealed that she had been battling an illness and was only operating at "30 percent" physical capacity.

"At the end of the last week I was ill and I had some problems with my throat," said Tynybekova, who will aim for the gold in Tokyo after finishing fifth at the Rio 2016 Olympics.

"For the last week, I could not train because of my illness. I began training only in Almaty and I think the result is better than my expectations. It could have been worse because my condition was not good."

But what Tynybekova acknowledged was just as debilitating was the absence of the Japanese and Chinese wrestlers -- which meant missing out an another possible clash with rival Yukako KAWAI (JPN), who had planned to be in Almaty to defend her title.

The Japanese women's team withdrew just before flying to Almaty after suspected exposure to someone infected with the coronavirus. The Chinese could not participate because they had to undergo coronavirus testing arranged by the Chinese embassy. 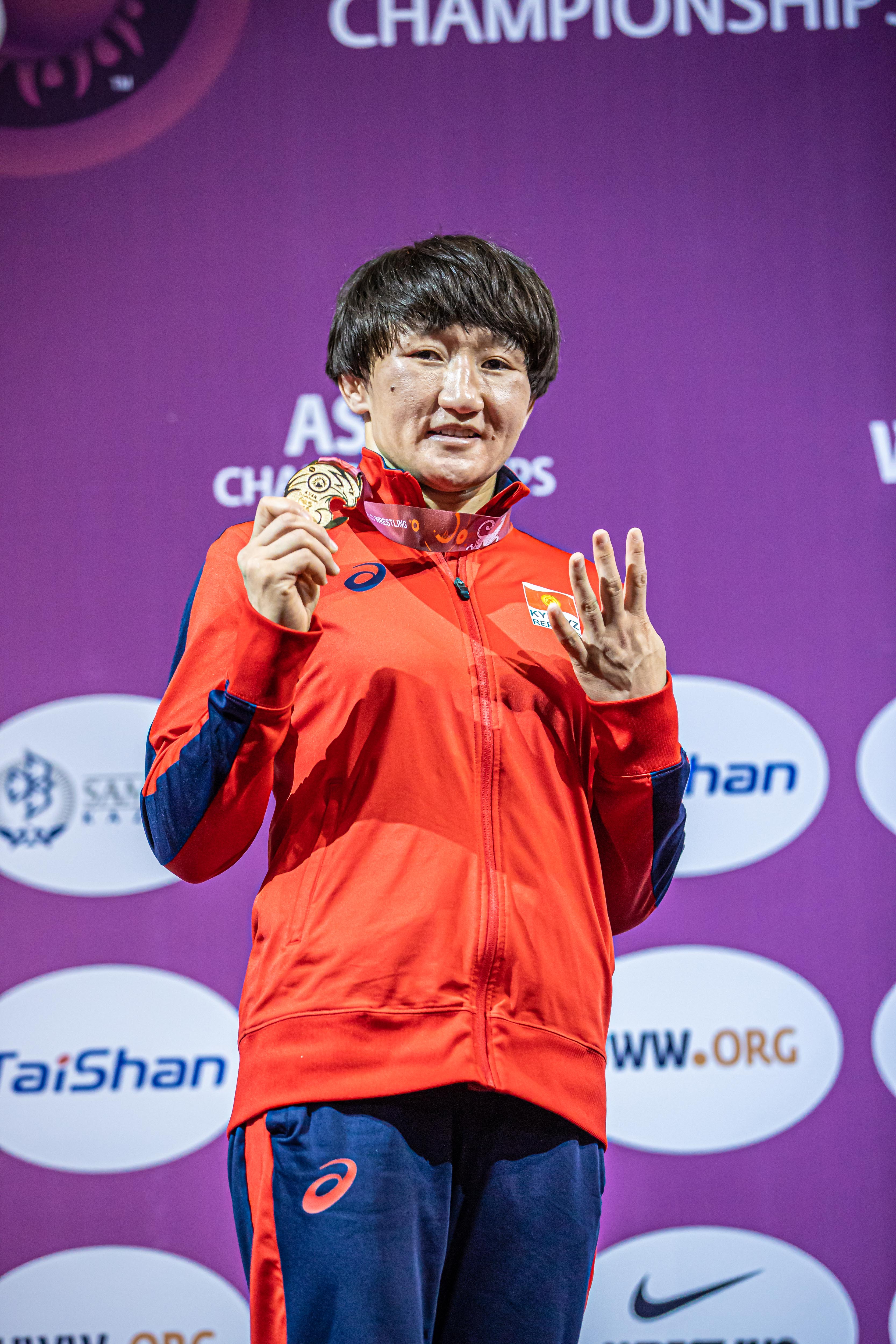 Kakran, who had already clinched the 72kg title after winning her first two matches in the early session, capped her run to the top of the medal podium with a quick and creative victory by fall over Sujin PARK (KOR) in their final round-robin match.

Kakran used a barrel roll to flip Park onto her back, then kept her back to Park's chest while keeping an arm locked to secure the fall in just 27 seconds. The 2020 champion at 68kg, Kakran became the second two-time Asian women's champion in Indian history -- a day after SARITA (IND) became the first with a victory at 57kg.

Following Kakran's win, dethroned defending champion Zhamila BAKBERGENOVA (KAZ) won a battle for the silver medal with a 9-2 victory over Tsevegmed ENKHBAYAR (MGL), who will take home the bronze medal.

It was a less-dominant repeat of Bakbergenova's 10-0 win over the Mongolian in the semifinals at last year's Asian Championships en route to the gold.

Altynay SATYLGAN (KAZ) picked up her second straight Asian bronze medal when she scored with a counter and a takedown in the second period for a 4-1 victory over Shinhye LEE (KOR) at 57kg.

Rushana ABDIRASULOVA (UZB) pulled a rabbit out of the hat to claim the 62kg bronze, using an underhook throw with a minute to go to flip over Irina KUZNETSOVA (KAZ) for 4 points and a 4-4 victory on criteria.

Next up on the schedule is freestyle, with competition Saturday in the 57kg, 65kg, 70kg, 79kg and 97kg weight classes. The finalists from two weight classes -- Ravi KUMAR (IND) and Hikmatullo VOKHIDOV (TJK) at 57kg and fierce rivals Takuto OTOGURO (JPN) and Bajrang PUNIA (IND) at 65kg -- are entered this year and in opposite brackets, meaning potential clashes for the title again.

ALMATY, Kazakhstan (June 10) -- Bolay Turlykhanov Cup in Almaty saw some of the biggest Greco-Roman stars in action. The field was highlighted by world and Olympic champion Mohammadreza GERAEI (IRI).

Iran did send a strong team but so did Kyrgyzstan and Kazakhstan. Turkey too had entered a few of their star wrestlers and ended up winning three gold medals.

Watch the 10 Greco-Roman finals from the Bolat Turlykhanov Cup.

Shermakhanbet injury defaulted against Geraei in the final but had defeated the Olympic champ in Round 3. Here's the bout.