Zhou Takes Over No.1 at 69kg, Icho Still Atop 58kg in Women’s Rankings

Zhou took over the top spot after an upset loss by world champion Natalia VOROBIEVA (RUS) at the Rio 2016 Olympic Games test event, which featured some of the top female wrestlers in the world.

Zhou defeated former junior world champion Dorothy YEATS (CAN) in the light heavyweight final by technical fall after the Pan American Games gold medalist defeated Vorobieva in the opening round.

Meanwhile, halfway around the world, another world champion also stumbled, but still remains on top of her weight category in this month’s rankings. 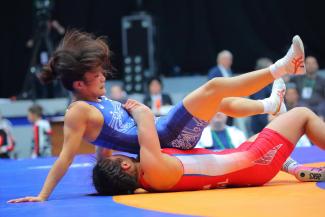 Three-time Olympic Games gold medalist Kaori ICHO (JPN), who had won 189 matches in a row following her last loss in 2003, was stunned in the 58kg final at the Yarygin Grand Prix tourney in Krasnoyarsk, Russia.

Unranked PUREVDORJ Orkhon (MGL), who wrestles most frequently at 55kg, had an answer for all of Icho’s attacks and ended up with a technical fall over the 10-time world champion.

Despite the loss, Icho remains in control of 58kg – at least, for the time being -- since there were no challengers in the rankings in a position to take up the mantle.

A challenge, however, was issued to three-time world champion Adeline GRAY (USA) by Erica WIEBE (CAN), who had pinned 2013 world champion ZHANG Fengliu (CHN) in the semifinals at 75kg in Rio.

Gray defeated a pair of silver medal winners from the previous world championships in Aline FERREIRA (BRA) in the quarterfinals and ZHOU Qian (CHN) in the semifinals before edging Wiebe, 7-4, in the final.

48kg – 2013 world champion SUN Yanan (CHN) took an injury default from Valentina ISLAMOVA (RUS) to climb to No.3 in the rankings while Asia champion Yuki IRIE (JPN) won her second Yarygin Grand Prix by fall over Nadezhda FEDOROVA (RUS) to break into the rankings at No.8. 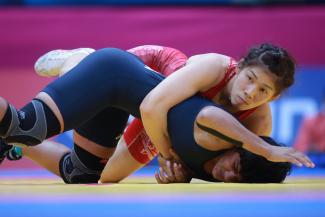 53kg – European Games silver medalist Katarzyna KRAWCZYK (POL) got a boost to No.7 with her victory at the Grand Prix of Paris while Lyubov SALNIKOVA (RUS) thumped former world champion Chiho HAMADA (JPN) at the Yarygin Grand Prix as both wrestlers vaulted to No.8 and No.9 in the rankings.

55kg – Zalina SIDAKOVA (BLR) upset teammate Katsiaryna HANCHAR (BLR) in the final of the Paris Grand Prix to climb seven rungs to No.11 in the ranking. Nadeshda TRETYAKOVA (RUS) toppled Asia champion Anri KIMURA (JPN) at the Yarygin Grand Prix to join the rankings at No.12 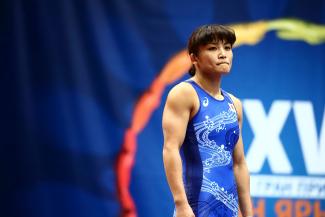 58kg – 2014 European bronze medalist Mimi HRISTOVA (BUL) rallied for her first Dan Kolov title after three years as runner-up to climb to No.8 in the rankings, while LI Qian joins the rankings at No.13 with a runner-up in the Rio test event. 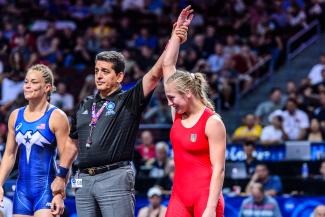 60kg – Dzhanan MANOLOVA (BUL) won all three bouts in a round-robin tournament at Dan Kolov for the title, while 2014 world champion SUKHEE Tserenchimed (MGL) rebounded from a first-round loss to Kaori ICHO (JPN) for a bronze medal.

63kg – 2014 world champion Yulia TKACH (UKR) appears to have regained form, winning her first title in nearly one year at the Dan Kolov tourney for No.3 in the rankings. Anastasija GRIGORJEVA (LAT) won at the Schultz Memorial for No.4 while Maria MAMASHUK (BLR) won in Paris for No.6.

69kg – Two of the most recent world champions won events in January – Aline FOCKEN (GER) in Paris and Alina MAKHINYA (UKR) at the Dan Kolov tourney in Sofia – as the last four world champions crowd into the Top Five of the light heavyweight rankings. 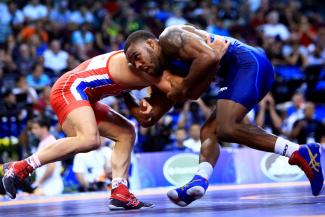 75kg – European U23 champion Daria OSOCKA (POL) won the Grand Prix of Paris crown and veteran Svetlana SAENKO (MDA) took the Dan Kolov crown in Sofia to edge up slightly in the rankings at 12th and 13th, respectively.