Wrestling.Ca: Where are they now? – Bob Molle 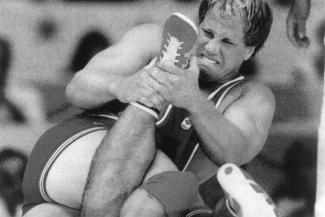 Bob Molle has lived an incredible life, although he says he is “just getting going.” His accomplishments include a silver medal in wrestling at the 1984 Olympics, two Grey Cup championships as a player for Winnipeg Blue Bombers, national championships as a wrestler and coach, an author, a public speaker and now a successful business coach. Molle explains that when he looks back at his life, what means the most to him are the relationships he developed along the way.

Born and raised in Saskatoon, Molle remembers that it was his high school coach that introduced him to the sport of wrestling. While he had always wrestled in the backyard as a kid, he had not considered formally participating in the sport until he was asked to try out. He loved the sport from the word “go”.

Wrestling became Bob’s third competitive sport, alongside football and hockey. It was not long before Molle’s affection for wrestling grew and his passion and abilities began to shine when the coach of the University of Saskatchewan team invited him to join their practices.

In 1980, Molle lost in the final of the national championship to his now lifelong friend, Nick Kiniski.  After the match, Kiniski suggested he come out to Simon Fraser University (SFU) so they could train together. Molle wanted to play football too, so he saw SFU as a “double opportunity.”

Molle continued to compete in both sports at SFU and was the first student to receive full scholarships in two sports. After capturing his first two (of four) national championships, World Cup and Pan-American Games bronze medals, Molle went on to win a silver medal at the 1984 Olympics – all by the age of 21. The following year, he made the transition to professional football after being drafted in the first round of the 1985 CFL draft by the Winnipeg Blue Bombers.

Three short years later, Molle and the Bombers won the Grey Cup. He had an Olympic medal and a Grey Cup championship by the age of 26. While he had found success in both individual and team sports, it was the lessons from his wrestling career that propelled him to his next challenge. “In wrestling, you are on your own. When you win or lose you are by yourself. You can’t say it was someone’s fault or we could have played better as a team. In wrestling, you have to look in the mirror. There is beauty in that because you have to ask yourself how can I do better?”

Pursuing goals is something Molle takes to heart. His next challenge was taking over the wrestling program at the University of Manitoba. Molle explains that while he did know if he would be a good coach, the more he did it, the more naturally it came to him. When he traveled with the football team, he took the opportunity to recruit top talent to the university. This led to two national championships.

After his football career, Molle took the lessons of strong relationships and finding good talent to the corporate world as a business coach. He knew that mutual trust was key to teambuilding and success. These were the keys to helping his clients and building his own business through referrals.

Today, as a business coach, Molle helps companies build solid internal relationships and strong connections with stakeholders to whom they are responsible. He recruits talent and helps build teams that work. He works with a number of companies across the country and no matter what the business, the key is finding the right people to work together. Like any team, Bob starts with an assessment of the roster, the talent level and looks for gaps in communication or execution. With the right people in place and an understanding of how they can complement each other, he helps take his clients to the next level.

When Molle looks back on all his accomplishments, it is the relationships he formed that stand out as his biggest highlight. “I am nearly 60 and still have many of the relationships I made during my time in wrestling. I always say once you are part of the wrestling family, you are always part of the family.” He continues to support those in the wrestling community in any way that he can.

Molle has taken the lessons he first learned in the wrestling room and added to them each step of his life journey and no plans of ever retiring. He makes time for the things he enjoys in life like his family and exercise, but remains focused on his continued personal growth. He is always asking himself, “What can I do better?” 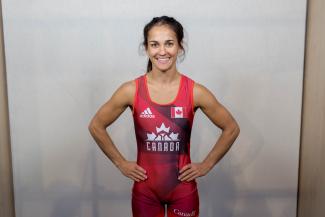 A political newcomer once known for representing her country will now represent the north Calgary Ward 3 at city hall for the next four years.

Mian said she had been going door to door to attract voters to her message of navigating the pandemic and continuing to support developing communities in north-central Calgary and that voters gave her a clear response.

“I think that I was given a very clear mandate by the voters of Ward 3 to run a positive campaign to collaborate with the rest of the councillors on some of the big challenges we have,” said Mian.

Mian, who represented Canada as a wrestler at the 2016 Olympics, said representing her constituents will be the honour of a lifetime. She said her first priority, once the new council is sworn in, is to continue to navigate through the COVID-19 pandemic. She noted that the most important ward-specific issues are ensuring services and infrastructure continue to grow.

Although she retired from wrestling after the '17 World Championships, Mian is still an active member of the wrestling community. Most recently, was a participant at the Women Lead Sport programme back in March/April 2021.