“This was a major step for the sport of women’s wrestling,” remarked United World Wrestling president Nenad Lalovic. “We have been trying very hard to increase participation in events and to bring attention to our strong women. This camp was a perfect success.”

The camp followed the 2018 Women’s Wrestling World Cup in Takasaki and was sponsored by United World Wrestling. The Japanese Wrestling Federation was a key partner, helping to provide lodging, food, transportation, and instruction

Athletes were taught new warm-up techniques, drills and spent several hours sparring. The enthusiasm and comradery expressed by the women was also conspicuous, with bouts of laughter intermingling with even the toughest conditioning workouts.

The camp featured coaching instruction with coaches from Japan, China, United States, Belarus and more. While aimed at the athletes, the coaches said they found the camp to be beneficial to their development, often learning new ways to pique the interest of their girls.

Simon ATANASSOV, a familiar face to wrestling fans around the world, attended his first-ever camp as a member of the Team China coaching staff. Atanassov recently took up residence to Beijing after five years in Azerbaijan, where he was the head men’s and women’s wrestling coach.

“I believe all the coaches gained something from me and I gained from them. I learnt from Japan and America. We shared each other’s experience and became better coaches. This is just great! I am for the development of wrestling!”

The camp attendees also visited Tokyo as part of a group tour put together by the JWF. Wrestlers saw the site for wrestling at the 2020 Tokyo Games before being taken on a tour of popular tourist destinations.

“The Japanese wrestlers have been so open with us,” said three-time world champion Adeline GRAY (USA). “They are pulling us into activities on and off the mat, showing us what foods to eat and not to eat. How to get on and off the train. Where to shop. It’s been that social aspect along with the competition in wrestling.”

“We are all out and having fun, but we are all sore!” said Gray. 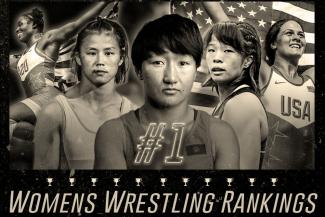 CORSIER-SUR-VEVEY, Switzerland (April 1) – After a stellar 2019 campaign where she won United World Wrestling's “Women's Wrestler of the Year” Tamyra MENSAH (USA) heads into the 2020 season as the top-ranked 68kg wrestler in latest worldwide women's wrestling rankings.

Mensah, a returning world champion at 68kg, has the most points (92) of any women's wrestler in any weight category and is one of two American women ranked No.1 in the world. She is joined by fellow American Adeline GRAY, a five-time world champion, who tops the rankings at 76kg.

Women's wrestling power Japan has five wrestlers ranked in the top 10 in their respective weight categories, with two of the five wrestlers being 2016 Olympic champions, Risako KAWAI (No.1 at 57kg) and Sara DOSHO (No.10 at 68kg). 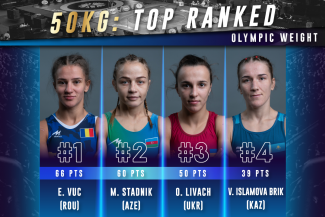 Nur-Sultan World Finalists Vuc, Stadnik Sit Atop 50kg Rankings
The two returning world finalists at 50kg, Emilia VUC (ROU) and Mariya STADNIK (AZE), sit atop the world rankings. Vuc finished as a runner-up to Stadnik at the 2019 World Championships in Nur-Sultan. In 2020, she earned a silver at the Matteo Pellicone in Rome and finished seventh at the European Championships. Stadnik, a three-time Olympic medalist, claimed her second world title and sixth world medal in Nur-Sultan.

Oksana LIVACH (UKR), a 2018 world bronze medalist, placed fifth at the 2019 World Championships and is ranked No.3 after earning medals at the Matteo Pellicone (bronze) and European Championships (silver).

Returning world bronze medalist Valentina ISLAMOVA BRIK (KAZ) is ranked No.4 after earning a bronze at the Asian Championships this year.

World Champ Pak Remains No.1 at 53kg, Mukaida No.2 after Winning Asian Title
World champion PAK Yong (PRK) defeated Mukaida twice in 2019, with the most recent victory coming by technical superiority in the finals of the 2019 World Championship in Nur-Sultan. Pak and Mukaida are ranked No.1 and No.2 respectively at 53kg and are separated by just four points. Mukaida claimed a silver medal at this year's Asian Championships.

World bronze medalist VINESH (IND) has had a strong year, winning medals at the Matteo Pellicone and European Championships. She is currently ranked No.3. 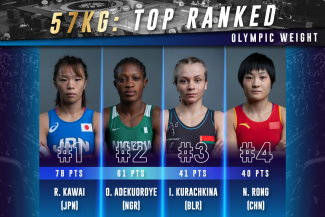 Kawai Secures No.1 Seed for Tokyo Olympics
Kawai, the reigning Olympic and world champion, locked up the No.1 seed for the Tokyo Olympics after winning her fourth Asian gold medal. The 25-year-old Japanese wrestling star claimed her third world title in September by defeating world champion Ningning RONG (CHN).

Returning world bronze medalist Odunayo ADEKUOROYE (NGR) is the clear No.2 at 57kg, but remains 17 points behind Kawai. Adekuoroye, a three-time world medalist, has fared well in 2020, winning a gold medal at the Mateo Pellicone to go along with her sixth African gold medal.

Iryna KURACHKINA (BLR), a world bronze medalist in 2017 and 2019,  is one point ahead of Rong for the No.3 ranking at 57kg. Kurachkina won a bronze medal at the European Championships in February, her third straight European medal. 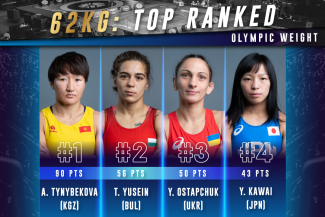 Kyrgyzstan's First World Champ Tynybekova Remains No.1
Aisuluu TYNYBEKOVA (KGZ) made history in September by becoming the first Kyrgyzstan wrestler to win a senior world title when she captured the women's 62kg gold medal. Tynybekova has carried that momentum into 2020, winning a gold at the Matteo Pellicone as well as bronze at the Asian Championships. She has the second-most ranking points of any women's wrestler and has locked up the top seed at 62kg for the Tokyo Olympics. 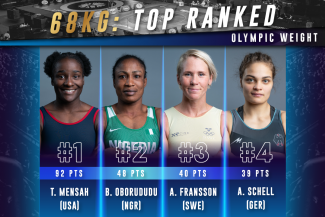 Mensah Locks Up No.1 Ranking for Tokyo Olympics
The reigning world champion Mensah has locked up the No.1 seed for the Tokyo Olympics. After winning gold in Nur-Sultan, Mensah followed it up with a silver at the Matteo Pellicone and a gold at the Pan American Championships, where she earned the Outstanding Wrestler award after she recorded three falls and a technical superiority.

Ranked No.2 at 68kg is Blessing OBORUDUDU (NGR), who won her 10th African championship this year, where she outscored her opponents 40-0. Oborududu claimed a bronze at this year's European Championships. World champion and Olympic medalist Jenny FRANSSON (SWE) is ranked No.3. She was a runner-up to Mensah at the 2019 World Championships. 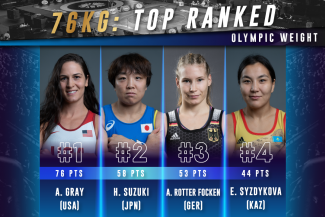 Five-time World Champion Gray Remains No.1 at 76kg
Gray, a five-time world champion, is ranked No.1 and will be looking for her first Olympic medal in Tokyo. She reached the final of the Pan American Championships in March before defaulting to earn a silver.

Hiroe MINAGAWA SUZUKI (JPN), a silver medalist at the 2019 World Championships, won a gold medal at the Asian Championships and holds the No.2 ranking behind Gray.

2014 world champion Aline ROTTER FOCKEN (GER) has been one of the world's top wrestlers for many years and currently sits at No.3 in the 76kg rankings. She won a world bronze medal in Nur-Sultan, and has had strong results in 2020, winning bronze medals at both the Matteo Pellicone and European Championships.

Asian bronze medalist Elmira SYZDYKOVA (KAZ) is ranked No.4, while Qian ZHOU (CHN), a silver medalist at the Matteo Pellicone, rounds out the top five.