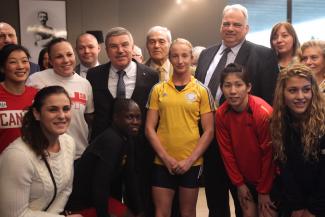 The eight-week program, bookended by International Women’s Day March 8, brings together eight women from the sport of wrestling for a two-month focus on increasing female participation in the sport.

IOC President Thomas Bach attended the day’s event, meeting with the eight women featured in the campaign and watching as several Olympic wrestlers demonstrate popular techniques of the sport. Though suffering from a hand injury Bach joined the demonstration as 2008 Olympic gold medalist Carol HUNYH (CAN) coached him on a takedown technique.

“We’re committed to matching the IOC and President Bach’s pledge to ensure more opportunities for female athletes around the world,” said Lalovic. “This event is only the beginning of our progress. I know that we are united in our goals.”

IOC executive board member and head of the IOC’s Athlete Commission Claudia BOKEL (GER) also attended much of the day’s program. An Olympic silver medalist in fencing, Bokel sat-in on the wrestling body’s newly formed Athlete Commission and later offered guidance during a panel discussion on women in wrestling and international sport.

“This was a great day spent with a wonderful group of female athletes and leaders,” said Bokel. “Pushing forward has worked well for wrestling and I think it opens the way for future development. In the end this is really about the sport and the athletes.”

The Super 8 launch was also the platform for United World Wrestling’s World Cup draws in Greco-Roman, women’s wrestling and freestyle. The event, which was streamed on YouTube, assigned qualifying nations into two groups. The full results of the draw ​can be found here.

The final day of the Super 8 will take place on Sunday, March 8 at the Women’s Wrestling World Cup in St. Petersburg, Russia.