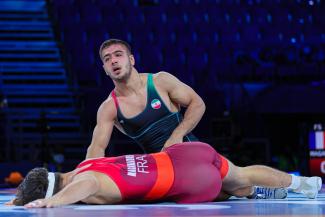 SOFIA, Bulgaria (August 4) -- Two weeks after the U17 World Championships, the U20 Worlds will be thrown open in Sofia, Bulgaria.

Close to 600 wrestlers will be in the Bulgarian capital eyeing the 30 world titles on offer with Iran and the USA hoping to defend their freestyle and women's wrestling team titles respectively.

Iran is led by two defending U20 world champions in Erfan ELAHI (IRI) and Amirhossein FIROUZPOUR (IRI). Elahi won the title at 70kg and will now be jumping up to 74kg while Friozpour, who has made his name at the senior level as well, will be moving from 86kg to 92kg.

At 86kg, Rakhim MAGAMADOV (FRA) will try to win the gold he missed last time as he returns in the same weight class as the U20 European champion.

In women's wrestling, Nonoka OZAKI (JPN) at 62kg and Oleksandra KHOMENETS (UKR) are the biggest names in the field. A few former and current U17 world champions are also entered.

Greco-Roman has none of the finalists returning but five bronze medalists are trying to better their medals from the previous edition.

The U20 World Championships begins August 15 in Sofia with all the action live on uww.org. 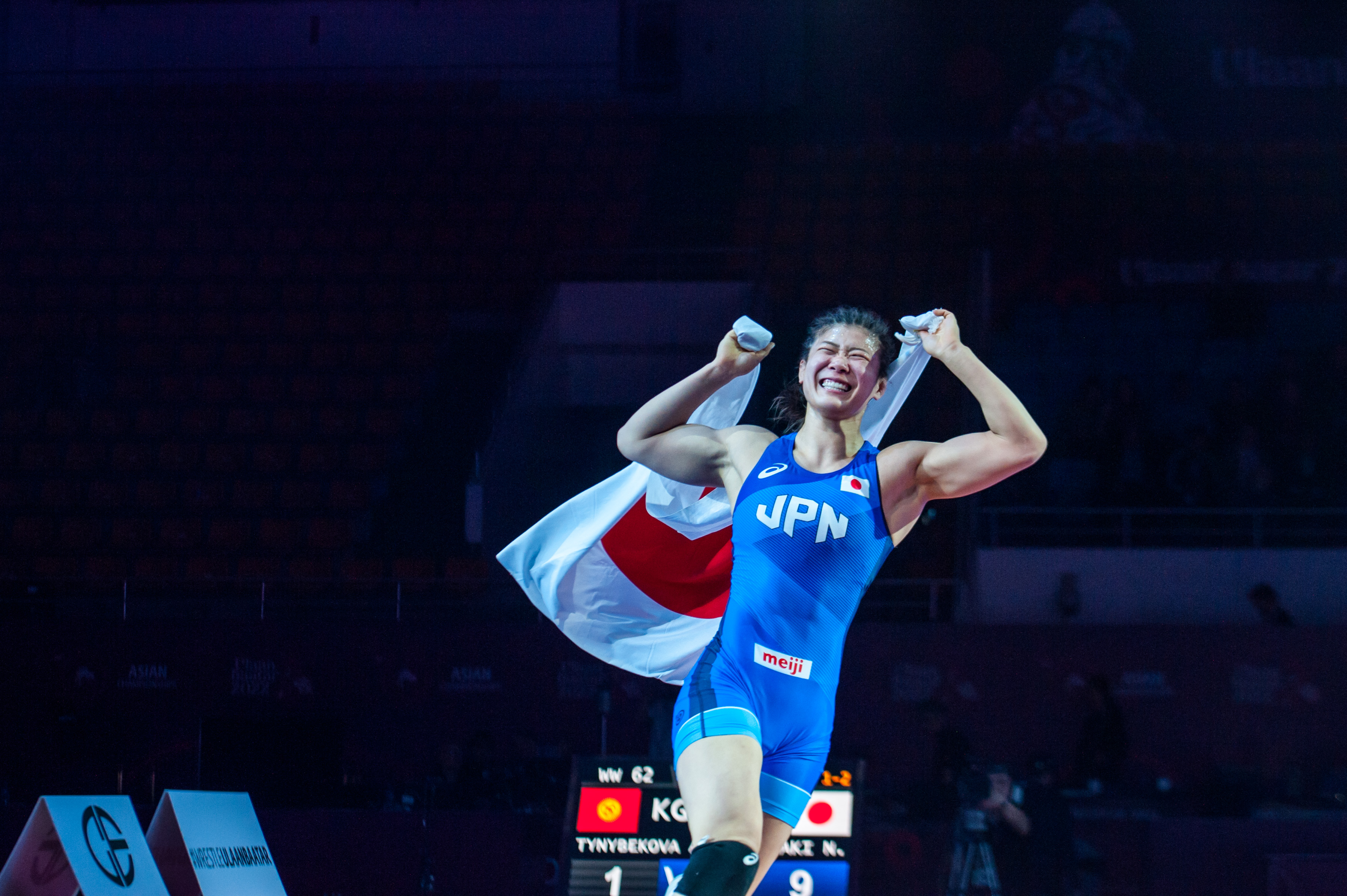 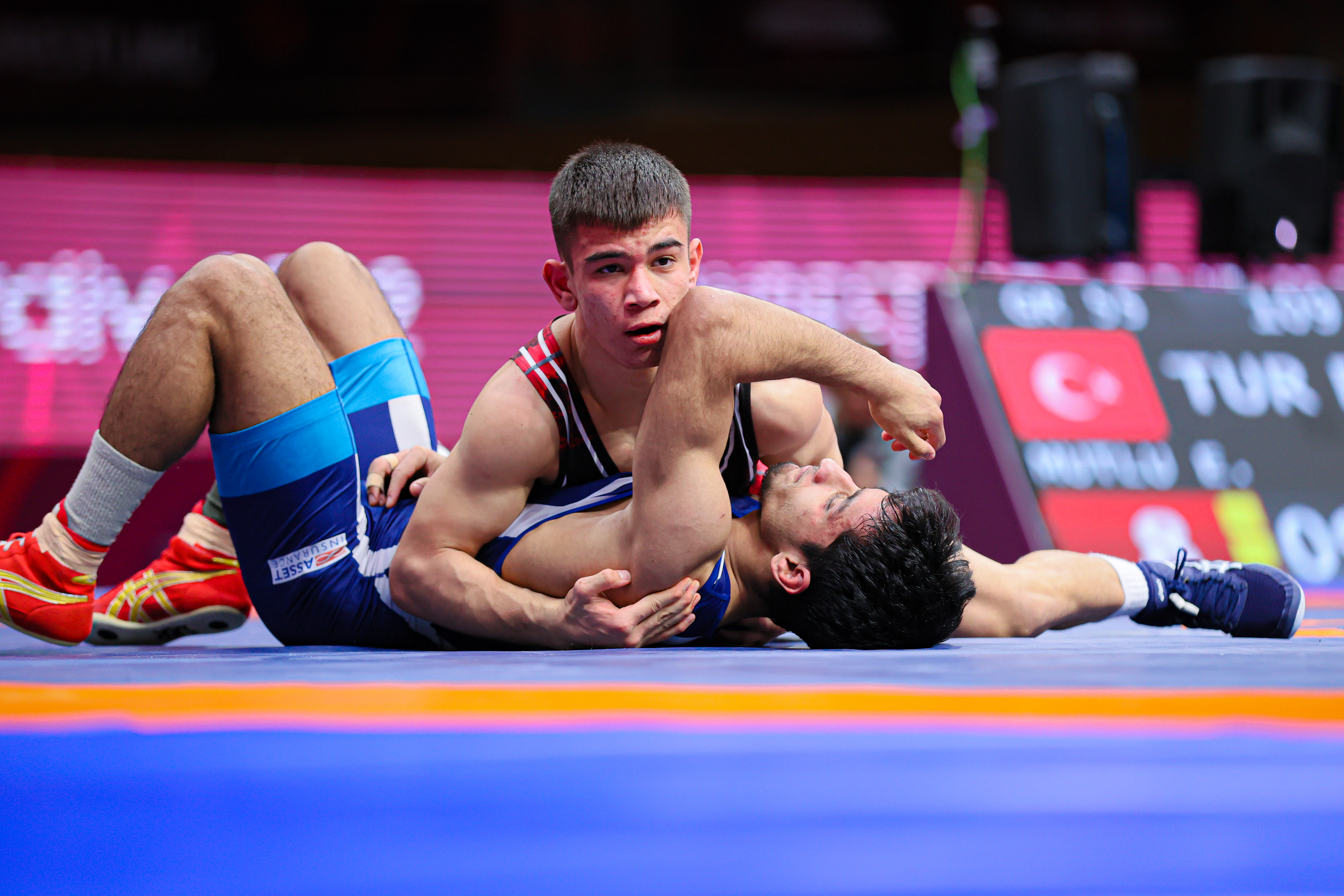 SOFIA, Bulgaria (August 11) -- Future stars of freestyle wrestling will head to Bulgaria’s capital in troves, as 22 reigning continental champions will be in action next week at the U20 World Championships.

That means there will be at least two continental champions vying for world supremacy in nine of the ten weight classes.

At 57kg, continental gold medalists Simone PIRODDU (ITA) and Merey BAZARBAYEV (KAZ) are the favorites to reach the finals of the 22-man bracket that features a total of four continental medalists. 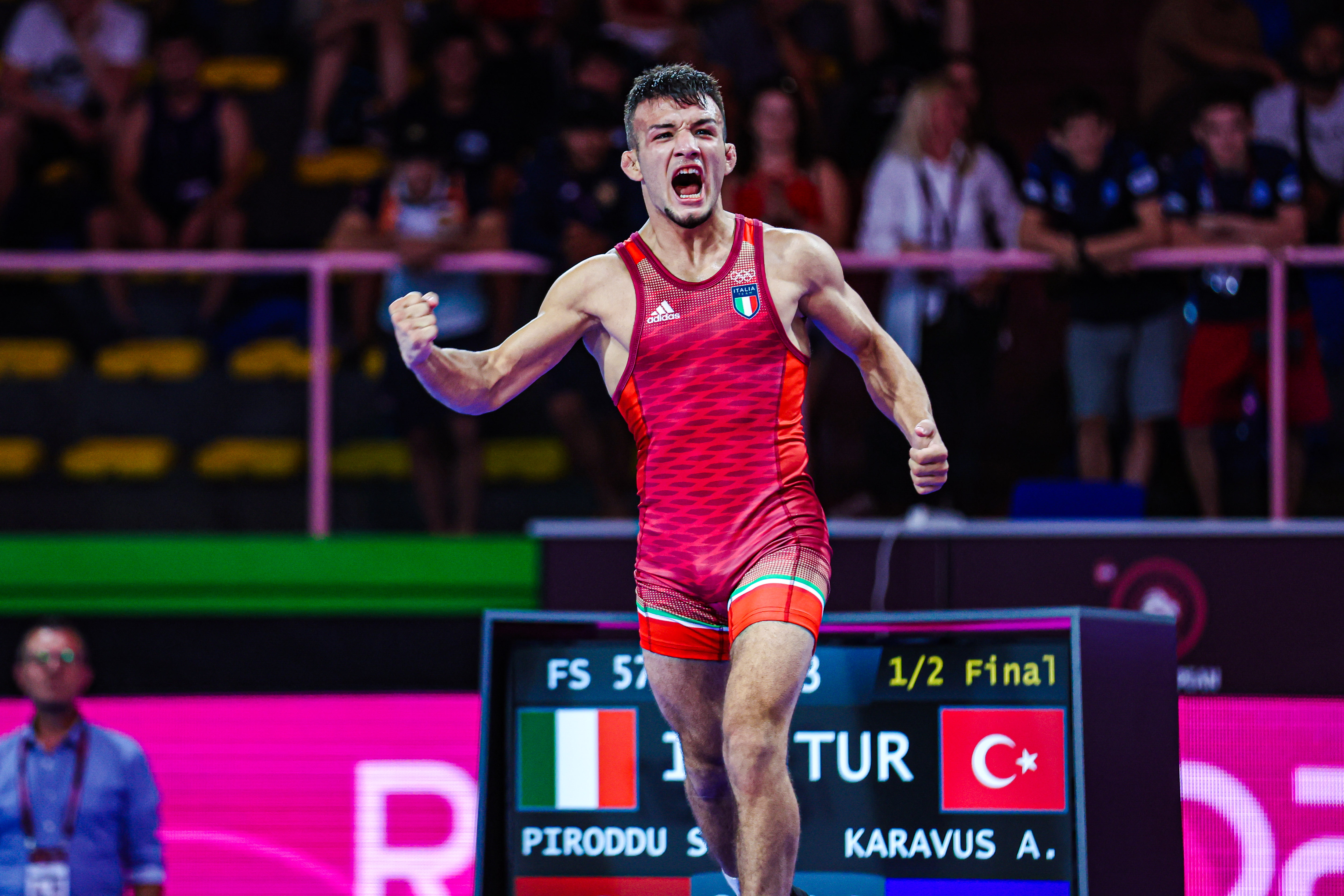 Italy’s Piroddu won five matches at the U20 European Championships earlier this year and dominated in all matches but one -- his opening round bout -- where he eked out a 4-4 win over Seyfulla ITAEV (FRA). Outside of that match, the 2018 U17 world bronze medalist outscored his four remaining opponents 26-5 to win his second career age group European title. He also won the 2019 U17 European title.

His biggest test will likely be Kazakhstan’s 19-year-old Bazarbayev.

Bazarbayev has an impressive 6-2 record during his 2022 campaign, highlighted by his U20 Asian gold medal and bronze-medal finished at the senior-level Bolat Turlykhanov Cup Ranking Series event.

Other wrestlers to pay attention to are Harutyun HOVHANNISYAN (ARM) and Luka GVINJILIA (GEO) who won European silver and bronze medals respectively. 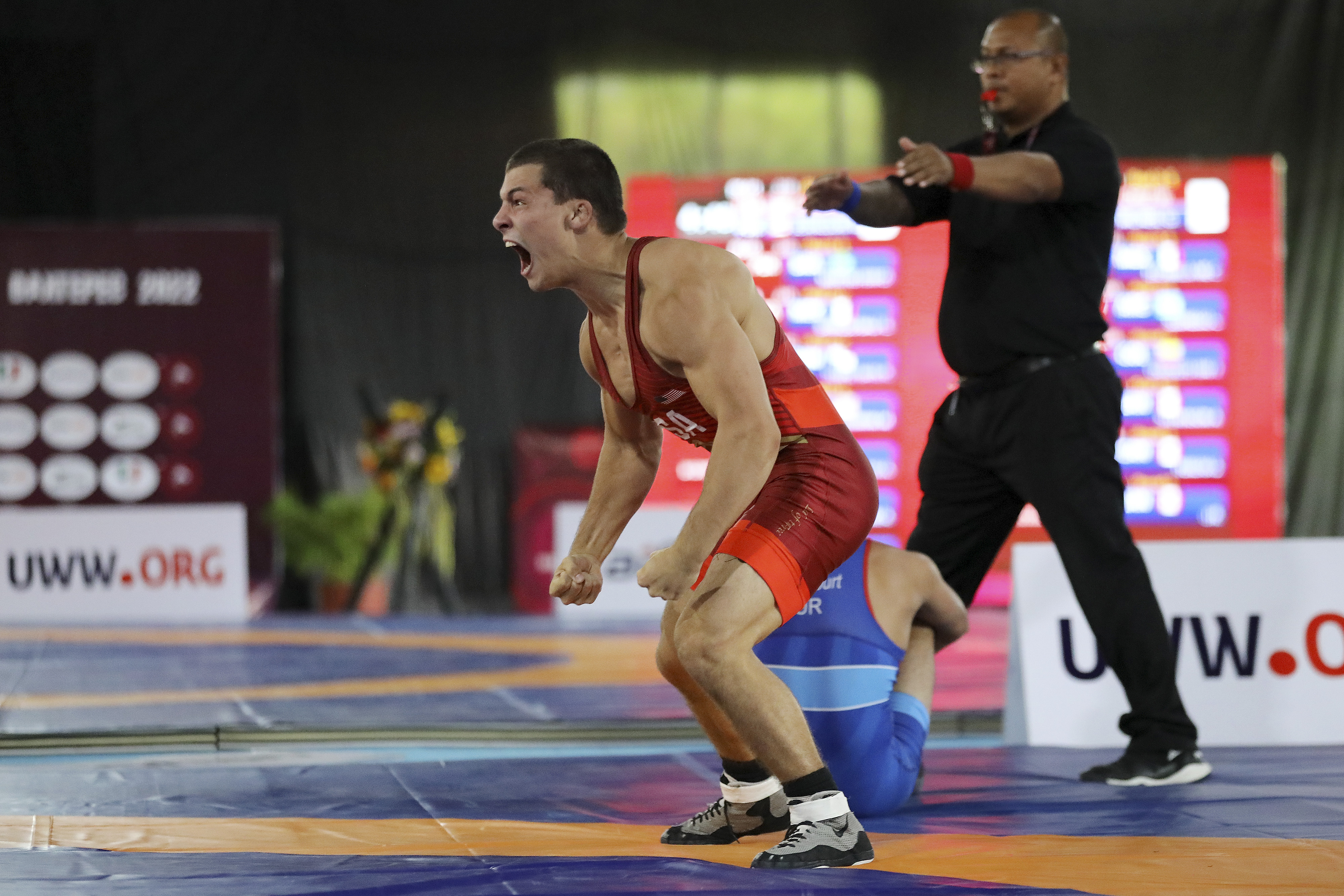 There will be six U20 continental medalists wrestling on the 21-man 61kg chart.

Habibzadeh will be competing on the international scene for the second time in his career. The first came in Manama, Bahrain, where he won three matches and claimed the U20 Asian title.

Bouzakis, this year’s U20 Pan-American champion, will be looking to improve his 8th-place finish from last year’s U20 World Championships. But in Ufa, the 19-year-old American competed in Greco-Roman but will switch styles and try his hand at freestyle.

Outside of the trio of champs, other 2022 continental medalists to be on the lookout for are Khamzat ARSAMERZOUEV (FRA), Maiis ALIYEV (KAZ), Mohit KUMAR (IND) and Hayk ABRAHAMYAN (ARM).

Arsamerzouev and Aliyev were continental silver medalists while Abrahamyan was a European bronze medalist. 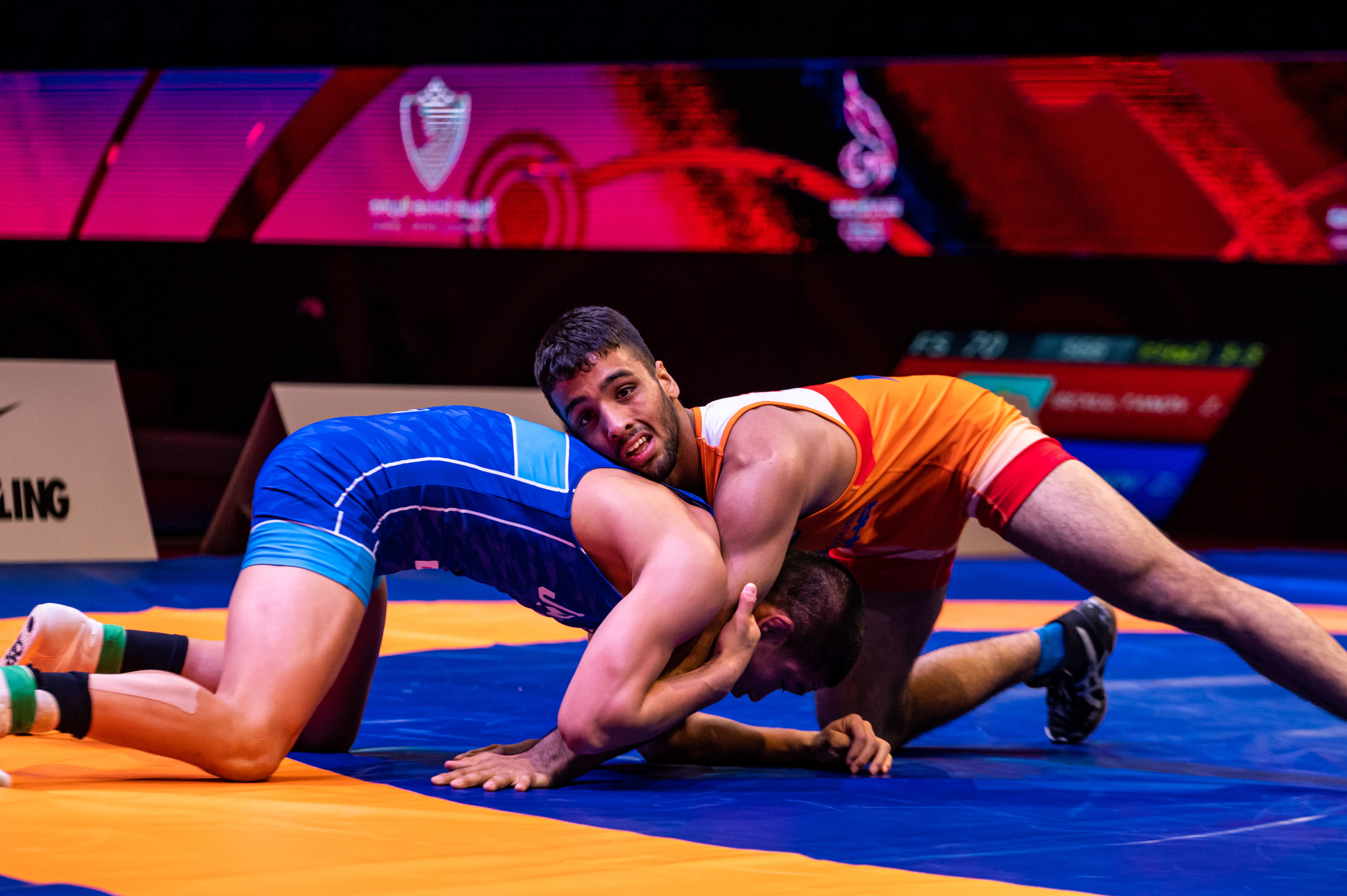 At 65kg, Mykyta ZUBAL (UKR) and SUJEET (IND) are the favorites to tussle for gold.

Zubal is one of the most offensive guys entered in the competition. The 19-year-old Ukrainian scored 42 points in his four matches en route to winning the U20 European title earlier this year.

His biggest test will likely be India’s Sujeet who dominated his way to the U20 Asian title last month. He picked up four wins – including three shutout wins totaling 28-0. He also won the senior-level Ranking Series event in Tunis and claimed the gold medal at the U23 Asian Championships. 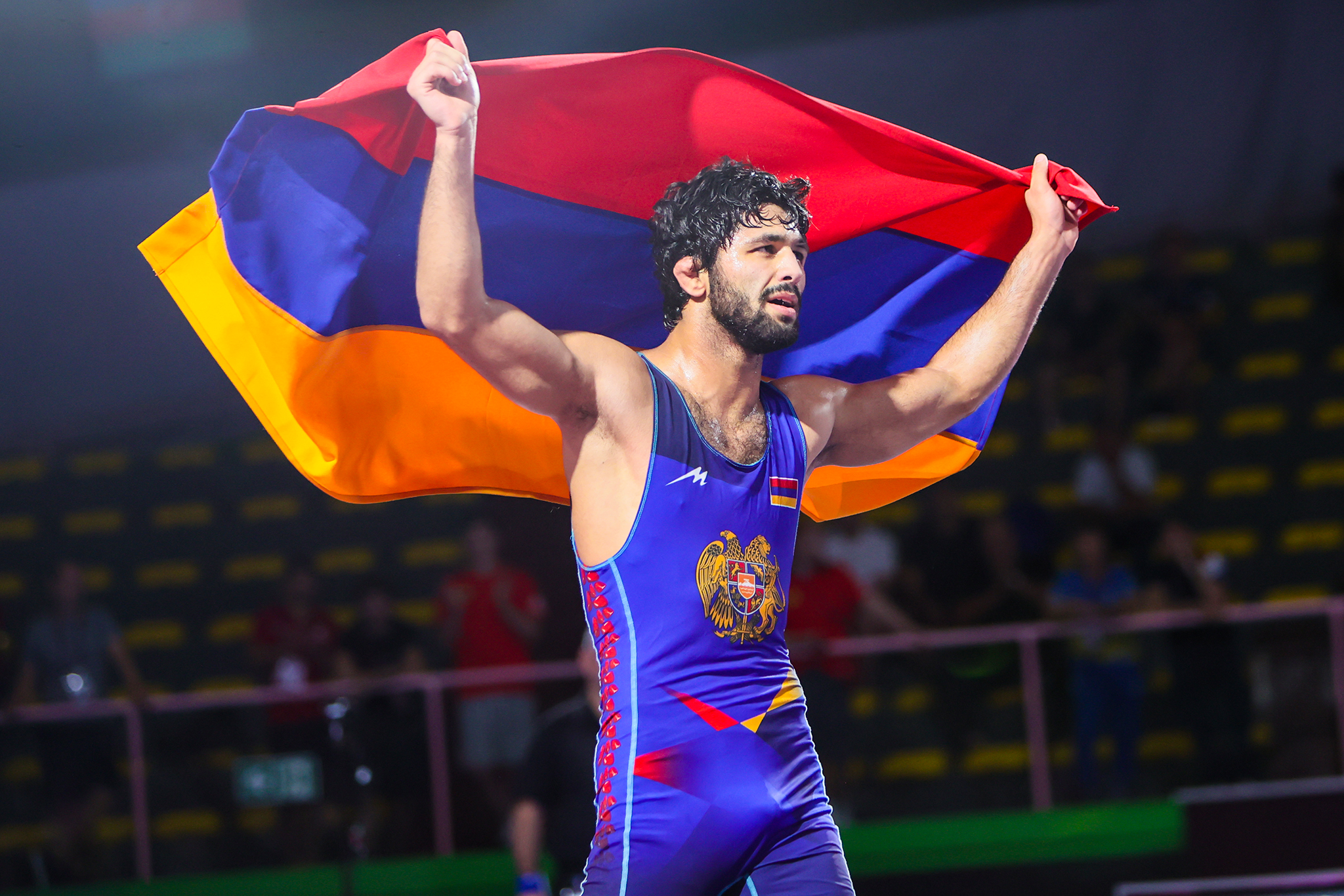 Another weight class that’ll house a trio of continental champs will be 70kg. Hayk PAPIKYAN (ARM), Hossein MOHAMMAD (IRI) and Mitchell MESENBRINK (USA) are champions in Europe, Asia and the Americas respectively. Each guy will be competing on the world stage for the first time in their career.

Other guys who have set the bar high for themselves are Asian silver medalist Mulaym YADAV (IND) and European bronze medalists Muhammad ABDURACHMANOV (BEL) and Pavel ANDRUSCA (MDA).

The most intriguing weight in Sofia will undoubtedly be 74kg as it has three top contenders, with the front runners being returning world champion Erfan ELAHI (IRI), Dzhabrail GADZHIEV (AZE) and Alexander FACUNDO (USA).

Depending on how the bracket plays out, there’s the potential to see a rematch from last year’s U20 world finals at 70kg between Elahi and Gadzhiev, where the Iranian snuck out the 6-5 victory over the four-time age-group European champion to win his first world title.

But Facundo will look to stop either guy if they step in his path of winning a third age-group world medal. He won U17 world bronze medals in 2018 and 2019 but has his sights set on reaching the world finals and claiming gold for the first time in his career.

Sagar JAGLAN (IND), the U17 world champion from 2021, will also look to finish among the medalists.

Mushegh MKRTCHYAN (ARM) and Sobhan YARI (IRI), the pair of 2022 continental champs, are the betting favorites to vie for the 79kg gold medal.

Mkrtchyan will be making his first appearance on the world stage, while Yari is undoubtedly heading to Bulgaria with a chip on his shoulder. He lost his only match to Stambul ZHANYBEK UULU (KGZ) and finished in a disappointing 11th place at last year’s U20 World Championships. 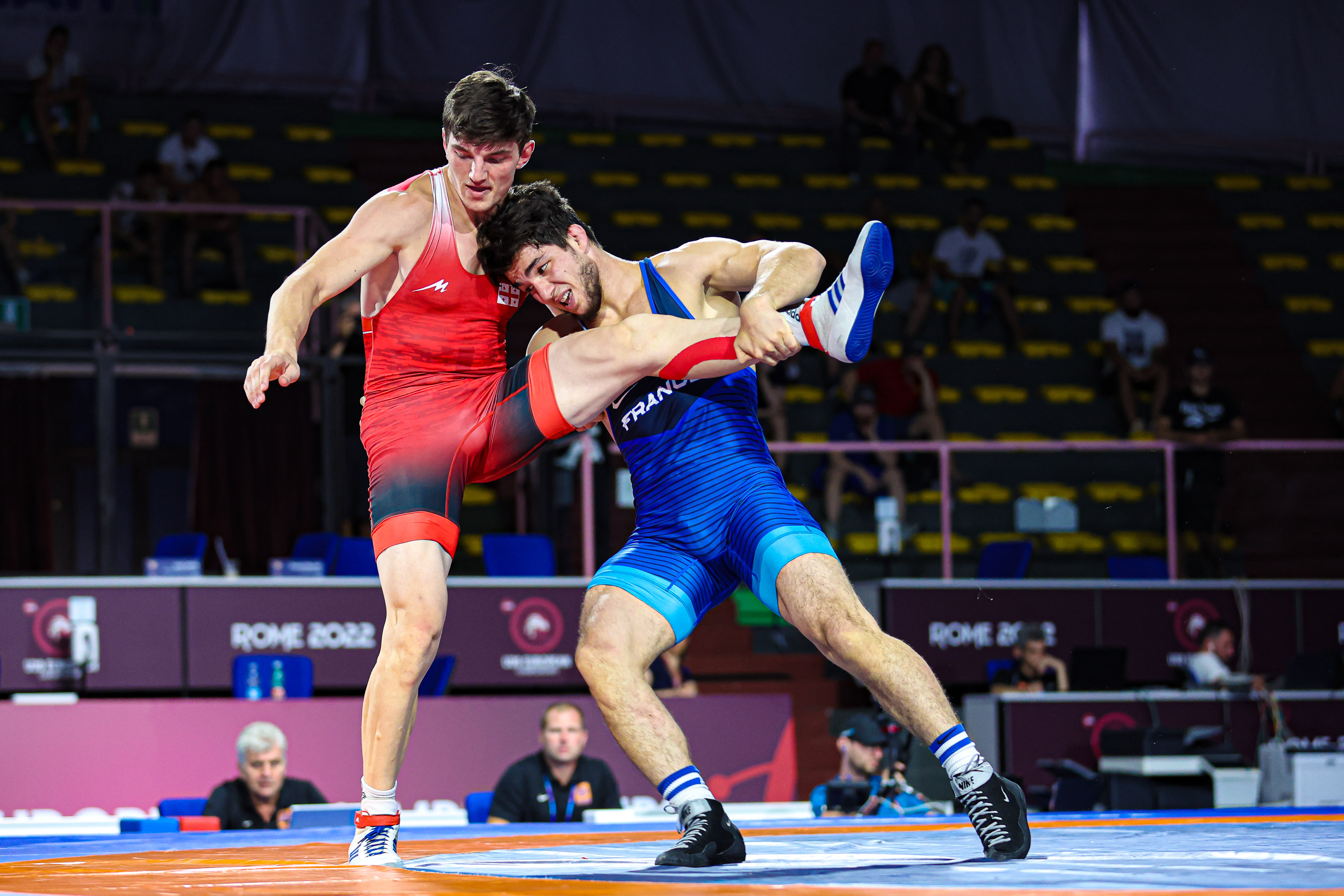 At 86kg, Rakhim MAGAMADOV (FRA) will look to become the second-ever French freestyle wrestler to win a U20 world title. The defending U20 European champion fell one match short at last year’s U20 World Championships after dropping his finals bout to Amirhossein FIROUZPOUR (IRI).

His biggest test will be reigning Asian champion Aref RANJBARI (IRI). This will be the Iranian’s first-ever trip to the World Championships.

At 92kg, outside of betting-odds favorite and reigning U23 world champion Amirhossein FIROUZPOUR (IRI), there are six guys with continental podium finishes in 2022, with the biggest star being European champion Ion DEMIAN (MDA). There are nine weights with at least a pair of continental winners, with Demian having the luxury of being the lone ranger in the weight.

His biggest competition will likely come from Europe, as the other three guys who shared the U20 European podium -- Andro MARGISHVILI (GEO), Adlan VISKHANOV (FRA) and Denys SAHALIUK (UKR) – are all looking to put an end to Demian’s hot-streak. 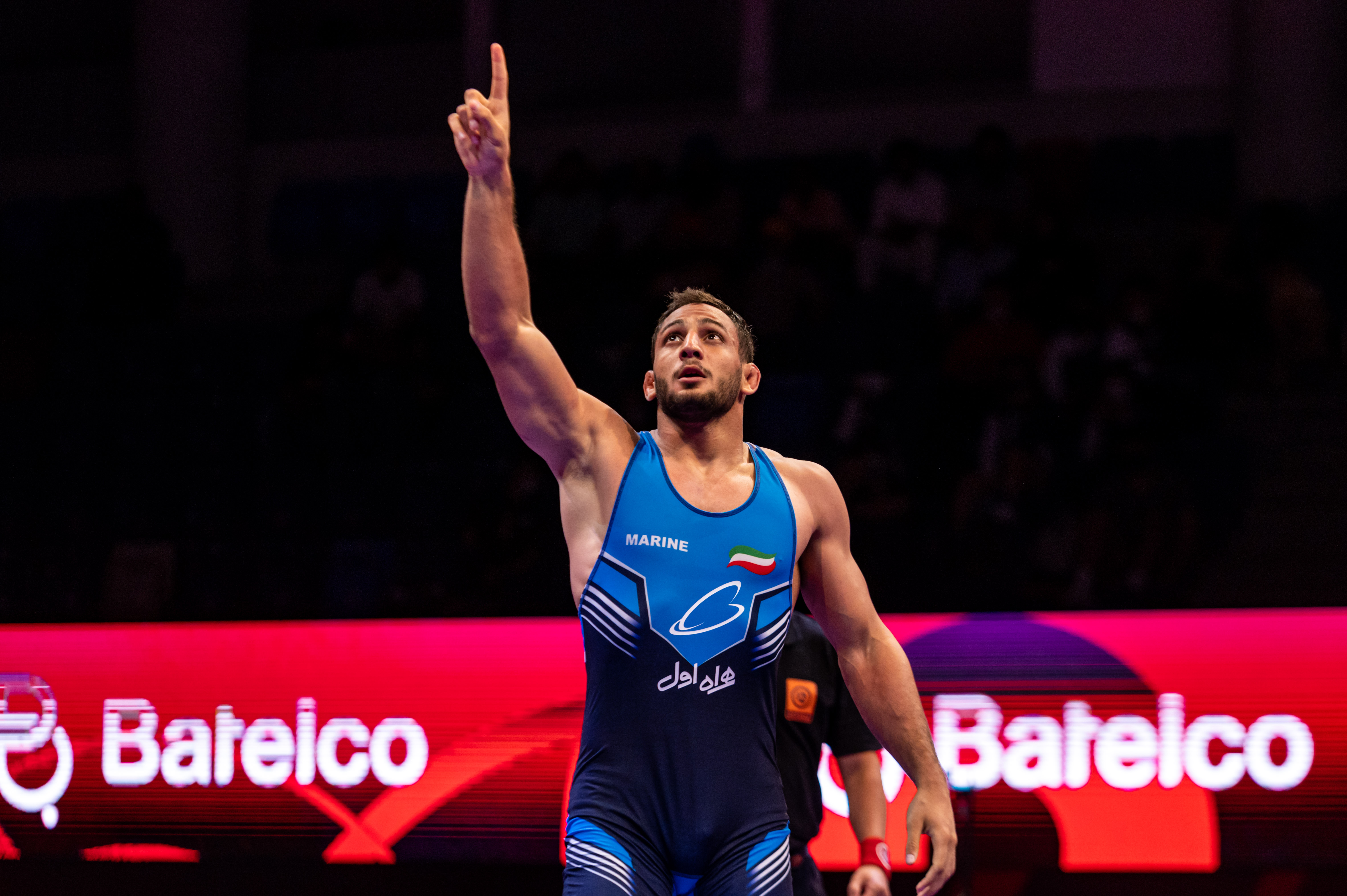 The favorites to clash for world supremacy at 97kg are Amirali AZARPIRA (IRI) and Benjamin KUETER (USA).

Azarpira heads into Bulgaria with an unblemished 8-0 international record and is looking to add a second world title to his resume. Last year, he claimed gold in Belgrade at the U23 World Championships.

This will be Pan-American champion Kueter's first showing at the World Championships.

Other hammers with a shot at winning a world medal are continental bronze medalists
Georgian TRIPON (ROU) and Zelimkhan MUSSIKHANOV (KAZ). 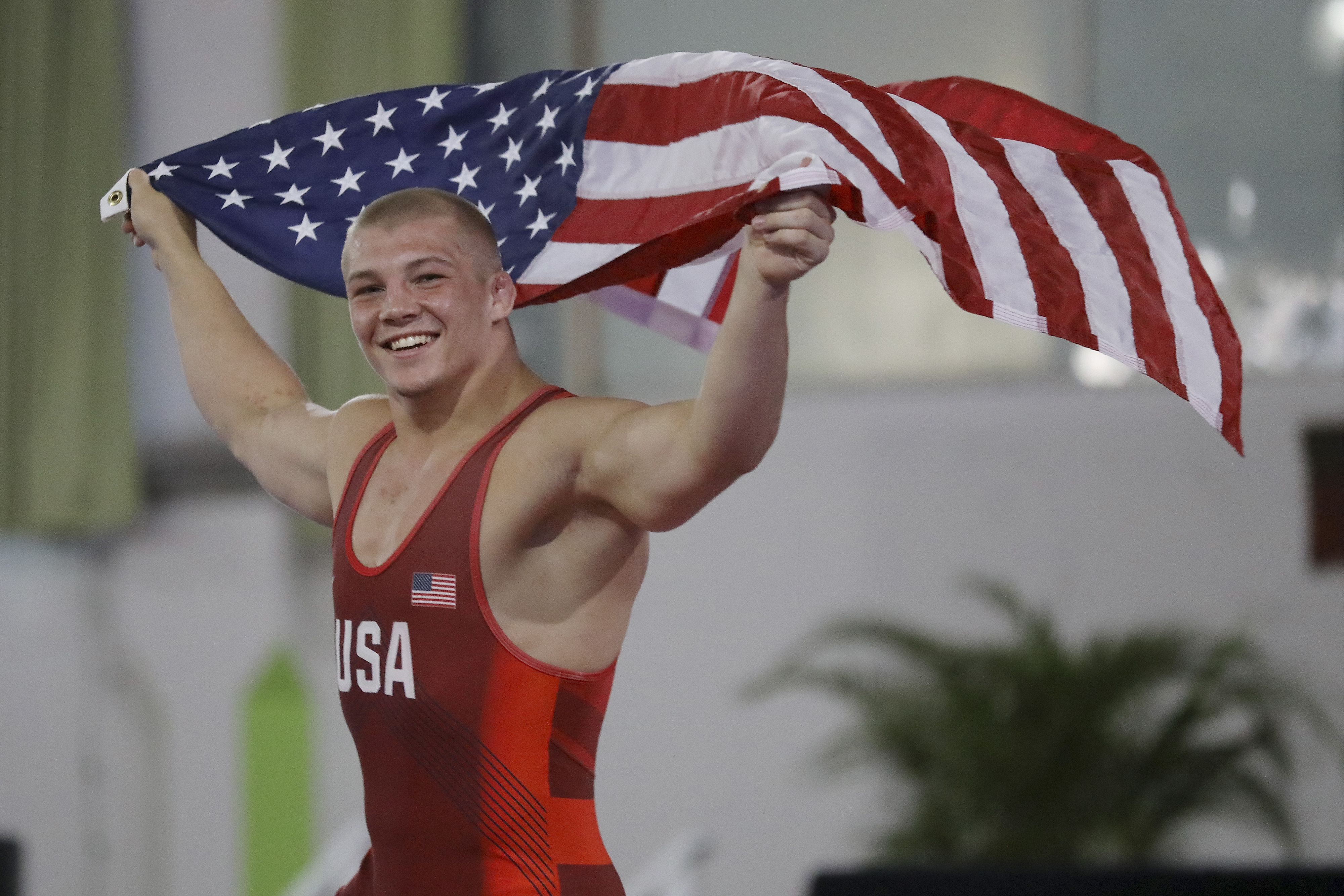 In addition to reigning U17 world champion Amirreza MASOUMI (IRI), Lyova GEVORGYAN (ARM) and Nicholas FELDMAN (USA) are the pair of guys with the most significant upside at 125kg.

Gevorgyan, the reigning three-time age-group European champion, is looking for his third world medal. He finished with a bronze and silver, respectively, at the 2019 and 2021 age-group world championships.

This will be Feldman, the reigning Pan-Am heavyweight champion’s first appearance at the World Championships.

Freestyle action gets underway in Bulgaria on Monday (August 15). You can watch all the action live on uww.org.