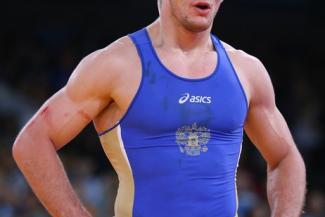 As most expected Russian wrestlers dominated this week’s World Combat Games in St. Petersburg. The home side walked away with a total of 18 wins against just three defeats across dual meets in Greco-Roman, freestyle and women’s freestyle. The Combat Games wrestling was contained to the three dual meets -- there was no individual tournament for wrestlers to enter.

The Russians opposition, dubbed the “World Team” by the event organizers, was a hodgepodge of established wrestlers from around Europe, including athletes from Finland, Azerbaijan and Serbia.

The World Team notched one victory in each of the three styles. In Greco-Roman Edward Barsegjan of Poland pinned Russian Ibragim Labazanov. One of the most competitive matches of the tournament was the women’s 67kg contest between Halina Leuchanka of Belarus and Anastasiia Shulavlinskaya of Russia, with Leuchanka ultimately hustling for a 9-8 victory. In men’s freestyle it was Azerbaijani 120 kg wrestler Aslan Dzebisov who found the 4-0 win over Makhamagazi Magomedov.

The 2013 World Combat Games is the second such event, with the first taking place 2010 in Beijing. The Games feature athletes across a variety of martial arts disciplines including the wrestling-based disciplines of gi and nogi grappling, judo, and belt wrestling.