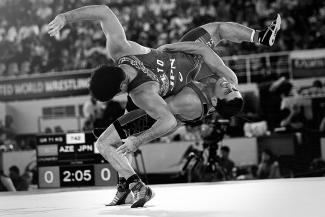 CORSIER-SUR-VEVEY (March 5) – Rasul CHUNAYEV (AZE) and Rafik HUSEYNOV (AZE) won key match-ups at the Greco-Roman World Cup in February and emerged as new No.1s in this month’s international rankings for the “classic style.”

Second-ranked Saleev had earlier defeated world champ Peter BACSI (HUN), 7-6, in a preliminary group dual meet and was set to take over the No.1 ranking before his final bout with Huseynov.

The wins by Chunayev and Huseynov helped lift Azerbaijan to its first World Cup triumph in Greco-Roman, 4-4 on criteria, after World Cup victories in freestyle in 2004 and 2009.

Despite the loss in the final, Russia saw the return to form of former world champions Roman VLASOV (75kg) and Nikita MELNIKOV (98kg) who had struggled through 2014 with subpar performances.

At other events in February, the Granma Cup finals were a parade of current and former Pan American champions from Cuba with five winners moving into the rankings for the first time in 2015, including Yasmany LUGO CABRERA (98kg), who has not lost in the Americas since February 2012.

European champion Zhan BELENYUK (UKR), third-ranked at 85kg, got back on the winning track at the Takhti Cup as seven of the eight winners in Tehran either joined or were already listed on the rankings.

Belarus won four titles at the Zagreb Open with all eight winners making it to the rankings.  Joe RAU (USA) was the only winner from outside Europe, defeating Pytlasinski titlist Viktor SASUNOVSKI (BLR) for No.14 in the rankings at 80kg.

Wrestlers in the rankings are listed by name, country code, most recent or most notable result over the last 12 months, and their position in the previous rankings. 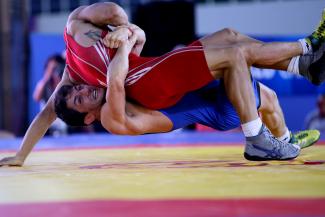 59kg – Golden Grand Prix Final winner Taleh MAMMADOV (AZE) defeated compatriot Orkhan AKHMEDOV (AZE), 2-2 on criteria, to climb to No.13 in the rankings with a triumph at the Takhti Cup. 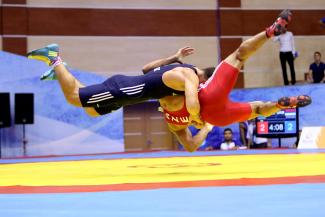 66kg – European silver medalist Hasan ALIYEV (AZE) notched three key wins, including a 5-0 decision over world bronze medalist Afshin BYABANGARD (IRI) in the World Cup to derail the defending champs’ chances of a repeat, to climb to No.5 in the rankings from seventh. 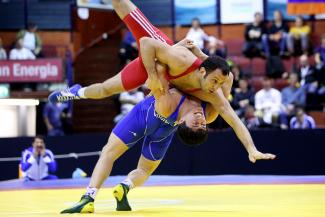 71kg – World bronze medalist Rasul CHUNAYEV (AZE) forced a disqualification on world champ Chingiz LABAZANOV (RUS) in the championship final of the Greco-Roman World Cup to take over the No.1 ranking.

Ramin TAHERISARTANG (IRI), who battled Chunayev 4-4 in a World Cup group preliminary (but lost on criteria), won the Takhti Cup to join the rankings at No.16 while 19-year-old Zoltan LEVAI (HUN) edged London 2012 Olympian Aleksandar MAKSIMOVIC (SRB), 4-1, at the Zagreb Open to grab No.19. 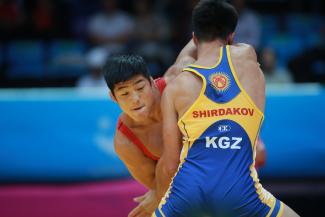 75kg – London 2012 gold medalist and former world champion Roman VLASOV (RUS) notched three wins, including a technical fall over world bronze medalist Elvin MURSALIYEV (AZE) in the World Cup final, to vault from ninth to No.4 in the rankings.

80kg – Golden Grand Prix Final winner Rafik HUSEYNOV (AZE) emerged the victor of the battle royal at the World Cup with a 2-1 win over world silver medalist Evgeni SALEEV (RUS) in the championship final to leap from No.11 at 75kg to the top of the 80kg rankings. 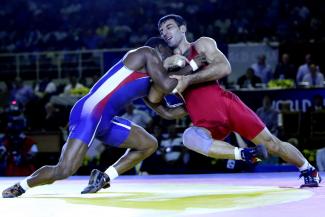 85kg – Junior world champion Islam ABBASOV (AZE) opened the World Cup with a win over Asian Games bronze medalist Mojtaba KARIMFAR (IRI) and capped it with a crucial fall in the final with Russia to earn No.8 in the rankings.

Takhti Cup runner-up Davod ABEDINZADEH (IRI), who defeated Golden Grand Prix Final winner Robert KOBLIASHVILI (GEO) in the semifinals, notched three wins in World Cup competition to pace Iran to third place while the lifting the Iranian veteran to No.10 in the rankings. 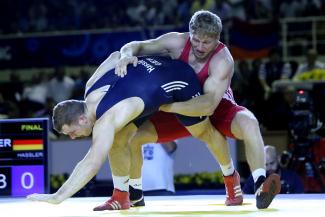 98kg – Former world champion Nikita MELNIKOV (RUS) won by disqualification over junior world champ Orkhan NURIEV (AZE) in the final of the World Cup. Melnikov’s return to form lifts him to No.12 in the rankings.

Aleksander HRABOVIK (BLR) recorded three wins without giving up a point at the Zagreb Open for his first-ever international triumph to tighten his grip on No.5. Pan American champ Yasmany LUGO CABRERA (CUB) racked up his ninth win in the Americas since February 2012 at the Granma Cup to join the rankings at No.13. 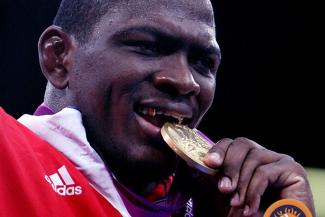 130kg – World and Olympic bronze medalist Johan EUREN (SWE) won all four of his bouts at the World Cup, including a 1-0 decision over Takhti Cup winner Bashir BABAJANZADEH (IRI), to climb one place to No.4 in the rankings.

London 2012 Olympian Iosef CHUGOSHVILI (BLR) rolled up a pair of technical falls and did not allow a point against him to win the Zagreb Open to return to the rankings at No.18. The Pytlasinski tourney winner was last ranked No.15 last September.