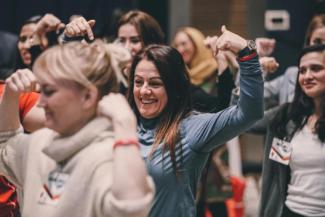 World-renowned expert Gabriela Mueller spearheaded the course with over 40 participants -- 95% women – from all five continents.

The objectives of the Women Lead Sports Master Program were to empower participants to shape the future of wrestling as a global sport, increase a diverse talent pool in leadership within UWW at all levels, and to learn effective leadership strategies, techniques, and applicable tactics that work today.

“Despite the challenges related to COVID, we managed to organize another successful virtual leadership programme to advance the gender equality topic in our sport. As part of the strategic plan 2022-2026, we hope to see more women and men of the future generations in leadership positions,” said Deqa Niamkey, UWW’s Development Director.

Participants learned valuable communication tactics that’ll assist them in negotiations and persuasions through the course’s interactive breakout sessions and discussions. They also learned how to build their personal power and influence and how to use them when persuading voters and key decision-makers.

“United World Wrestling and Deqa Niamkey, with her Leadership, once again models what leaders do: empower new leaders who empower more leaders.” She continued, saying, “to the team, to every participant who is now proudly displayed as a graduate of the program and amplifying their impact under," said the award-winning trainer and coach, Mueller.

EL JADIDA, Morocco (May 22) -- For a second straight day, Egypt and Algeria were involved in a thrilling team title race at the African Championships.

Egypt, after winning the Greco-Roman team title Saturday by one point, pipped Algeria for the freestyle team title as the continental championships came to a close in El Jadida.

The two nations were tied for gold medals at four apiece but wrestlers from Egypt reached the medal bout in all 10 weight classes while Algeria finished the opportunity at 57kg and had no entry in 125kg which hurt them the most. 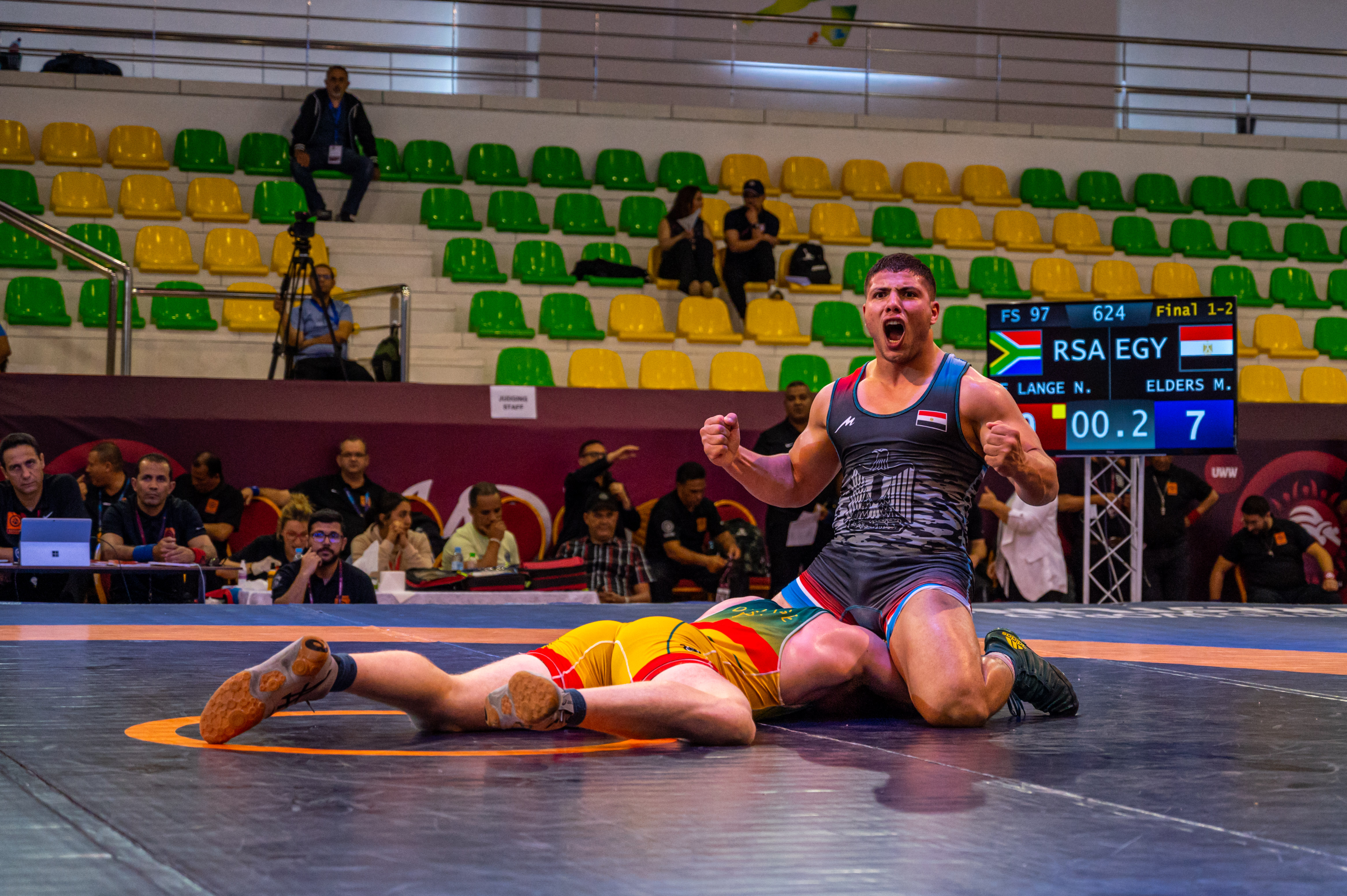 De Lange was expected to win his first gold at African Championships but Elders had different ideas. He began with a quick takedown and roll to lead 4-0. De Lange went for Elders' leg on multiple occasions but could not finish a single move. The Egypt wrestler led 5-0 at the break.

Elders shifted to defense in the second period and De Lange found it extremely difficult to score. He was for fleeing during a stepout which gave a tiring Elders two more points. He managed to play out the remaining time on the clock to seal the team title for Egypt.

Ikkal tried to shoot for Ramadan's legs numerous times in the second period but ended up giving up points which proved to be his undoing. Ramadan scored eight straight points on counters to win 9-5.

At 125kg, Youssif HEMIDA (EGY) made a mockery of his competition in the nordic bracket. With only three wrestlers entered, Hemida scored 11-0 wins over Anas LAMKABBER (MAR) and Hamza RAHMANI (TUN) to clinch the gold medal.

The former U23 World silver medalist, who trains in the USA, showed the gulf in the class in wrestling as Lamkabber and Rahmani looked out of sorts on the mat.

The fourth gold for Egypt came at 57kg as Gamal MOHAMED (EGY) held off Ebikewenimo WELSON (NGR), 5-0 in the final. In a controlled bout, Mohamed got the first point for Welson's passivity to lead 1-0 at the break.

He scored a takedown in the second period and wait for the clock to expire while fending off Welson's attacks. He got another takedown at the end off a desperate attack by Welson.

For Algeria, Tokyo Olympian Fateh BENFERDJALLAH (ALG) won his first senior African gold medal with a 6-2 win over Mahmoud BADAWI (EGY). He scored all of his six points in the first period while giving up two in the second.

The 21-year-old continues to improve at the senior level after qualifying Algeria for the Tokyo Olympics last year. The top seed in El Jadida began the tournament with an 11-0 win before pinning Edward LESSING (RSA) in the semifinal. 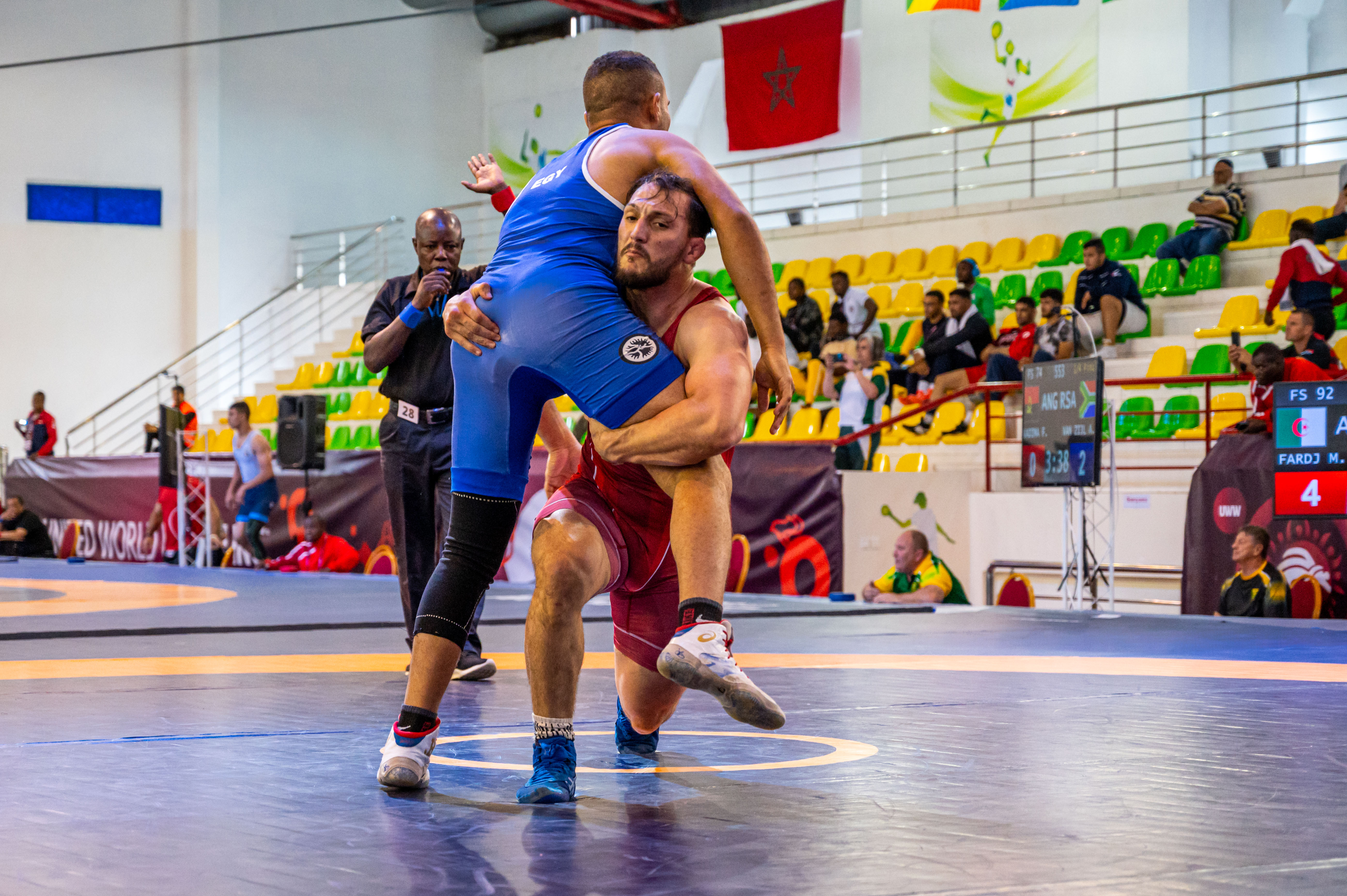 Another Olympian who won the gold for Algeria was Mohammed FARDJ (ALG). Unlike Benferdjallah, Fardj displayed a dominating performance in the 92kg final against Imed KADDIDI (TUN). He won 11-0 to defend his title.

He outscored his opponents 34-0 over three bouts in what was a stunning performance throughout the day.

The fourth gold medal for Algeria was won by Chems FETAIRIA (ALG) who defeated Youssef AIT BOULAHRI (MAR), 13-3 in the 79kg final to win his first African title.

A trip and gut wrench gave Fetairia four points but Boulahri also got two for holding Fetairia in danger in the same sequence as the score read 4-3. But Fetairia launched a suplex in the first period for four before a match ending four-pointer in the second period.

79kg was also the weight where Mauritius won their first freestyle medal in 20 years. Jean STE MARIE (MRI), who lost to Boulahri 14-12 in the semifinal, defeated Donald MABUSELA (RSA), 12-2 in the bronze medal bout to end his country's 22-year wait for a freestyle medal.

In the 65kg final, defending champion Cumba Mbali scored three points in the first period against Chouaib SAHRAOUI (ALG) and went into a shell. He was warned for passivity but that only cost him one point. He hung on for a 3-1 win and his third straight African Championships title.

Ndum was more dominant as he defeated Rami BRINIS (ALG), 9-0 in the 70kg final to become a first-time African champion.

Ndum's run in El Jadida included two technical superiority wins in the quarterfinal and semifinal before he maintained the clean slate in the final as well.

Another star from the country, Tokyo Olympian Diamantino IUNA FAFE (GBS) suffered a heartbreaking 2-1 loss to Welson in the 57kg semifinal. But he bounced back to claim the bronze medal with a 10-0 win over Rabby KILANDI (COD).