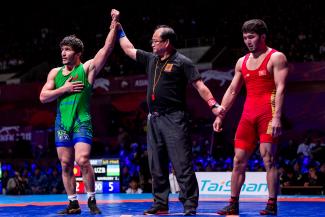 Uzbekistan shone brightest on the opening day of  men's freestyle at the Asian Championships, with Rio 2016 Olympic bronze medalists Ikhtiyor NAVRUZOV and Magomed IBRAGIMOV among a foursome that advanced to the finals in the five weight classes.

Navruzov, who won a second career Asian silver medal last year in New Delhi,  will aim for his first continental gold when he faces LEE Seungbong (KOR) in the 70kg final on the fifth day at the Kozhomkul Sports Palace.

Ibragimov struck gold in New Delhi, and he'll try to make it back-to-back championships with a victory in the 97kg final, where he will clash with Mojtaba GOLEIJ (IRI), a world U23 champion in 2017.

Ezzatollah AKBARIZARINKOLAEI (IRI) picks as a takedown on his way to the 79kg gold-medal bout. Photo: Max Rose-Fyne.

There will be another Uzbekistan-Iran duel on tap, as 2013 world silver medalist Ezzatollah AKBARIZARINKOLAEI (IRI) and Rashid KURBANOV (UZB) advanced to the 79kg gold-medal match.

The other Uzbeki in a final will be Makhmudjon SHAVKATOV, who failed to medal at the past two Asian Championships but is now assured of nothing less than a silver. But his objective will be gold when he faces KANG Kumsong (PRK) in the 57kg final.

Uzbekistan will have a chance for five medals on the day, as Temurjon USMONOHUNOV advanced to a bronze-medal match at 65kg and a clash with KIM Kukgwang (PRK).

"It is normal," said Uzbekistan coach Olimdjan Khikmatov when asked if his squad's showing exceeded expectations. "Today is good, tomorrow will be better," he added with a smile.

The Uzbeki-less final will pit 2015 and 2016 Asian champion Daulet NIYAZBEKOV (KAZ) against up-and-coming Daichi TAKATANI (JPN) for the 65kg title.

En route to the final, Takatani, the younger brother of former world silver medalist Sosuke TAKATANI, knocked off the other gold medalist from New Delhi 2017 in action on Saturday, Bajrang BAJRANG (IND), in the quarterfinals.

Bajrang has made a name for himself for giving up early points, then storming back with his extraordinary stamina and countermoves---in his first-round match, he turned a 5-0 deficit into a 16-5 technical fall.

But it was Takatani, a world junior bronze medalist in 2014, who had to come from behind, as he trailed 2-0 and 5-4 before scoring a late takedown and a step-out for a 7-5 victory.

Takatani then followed that up by scoring a pair of takedowns in each period to top Yones EMAMICHOGHAEI (IRI) 8-4 in the semifinals.

Japan freestyle coach Shogo MAEDA said the new rule specifying that wrestlers weigh-in on the morning of the competition, instead of the day before, works in Takatani's favor as he is adept at weight control and assuring he is in top condition.

"Bajrang has stamina and is strong late in the match, but this time, he stopped moving and seemed winded," Maeda said. "Takatani is especially strong in tackling late in the match. He's good when the opponent stops moving, catching a leg and fighting to score.

"It was the same against Iran. He's strong in fighting to the end."

Among the more interesting matches of the morning session was the first-round clash between New Delhi 2017 silver medalist LEE Seungchul and Russian-born Haji Mohamad ALI (BRN).

Lee dominated and built up a 10-2 lead, but mistakenly stopped wrestling momentarily, thinking he had earned a technical fall. Whether or not that inspired Ali is unknown, but he suddenly came to life and ended up going ahead 16-14 before winning by fall with 1:06 left.

Unfortunately, Ali had to then default his quarterfinal match against Uzbekistan's Usmonohunov.

On the night the curtain came down on the Asian Championships in Bishkek, Muslim EVLOEV (KGZ) provided the perfect final act.

Evloev gave the host country a gold medal in 74kg freestyle as the tournament wrapped up its well-supported six-day run at the Kozhomkul Sports Palace with finals in five weight divisions.

Evloev, riding an early 5-point lead, never let up in defeating Mandakhnaran GANZORIG (MGL) by 11-1 technical fall with :24 remaining to give Kyrgyzstan its first Asian freestyle gold since 2015 and fourth in its history.

"It's a great feeling," Evloev said of winning at home to improve on his silver medal he won last year in New Delhi. "The crowd was really supporting me as much as they could and I couldn't fail them, so I did my best."

Iran finished up by capturing two golds, as reigning world and Olympic champion Hassan YAZDANI CHARATI (IRI) cruised to his first Asian title with a victory at 86kg, and Mohammadjavad EBRAHIMIZIVLAEI (IRI) followed by winning the 92kg crown.

In a duel between Georgian-born wrestlers for the 125kg title, Davit MODZMANASHVILI (UZB) defeated Giorgi SAKANDELIDZE (QAT), 5-0, in a tepid match that capped the tournament.

The other gold at stake went to Nurislam SANAYEV (KAZ), a New Delhi 2017 bronze medalist who scored two takedowns in the second period of the 61kg final to top Kazuya KOYANAGI (JPN), 6-2.

Uzbekistan, which had won five medals, including two golds, on Saturday, added two bronzes to Modzmanashvili's gold to clinch the team title with 178 points. Iran finished second with 157 and Kazakhstan third with 146.

Evloev acknowledged he was heartened by the Greco victory of compatriot Akzhol MAKHMUDOV on the second day, one of the tournament's iconic moments for the thunderous ovation it elicited from the delirious crowd.

"Of course he did inspire me," Evloev said. "And I also want to say congratulations to Makhmudov because I haven't seen him yet."

In the final, Evloev used a single-leg lift to dump Ganzorig, a two-time world bronze medalist, backwards to the mat for a 4-point move, which became 5 when the Mongolian side's challenge was unsuccessful.

"It made me feel more confident, but I was going to wrestle until the last second," Evloev said of being staked to a big early lead. "That's why I won."

Outside of the Kyrgyz wrestlers, the spotlight was squarely on superstar Yazdani Charati.

And he lived up to expectations by overwhelming Uitumen ORGODOL (MGL) in the 86kg final, scoring with a takedown and roll combination right away, and then reeling off three takedowns for a 10-0 technical fall with 36 seconds still left in the first period.

So popular is the Iranian that he had a phalanx of Kyrygz security guards whereever he went, and was whisked pass waiting media and fans without comment after his medal ceremony and completing doping procedures.

In the 92kg final, Ebrahimizivlaei built up a 5-1 lead through the first period against Adilet DAVLUMBAYEV (KAZ), then gave up a passivity point and nothing else to take the gold with a 5-2 victory.

The plodding end to the final bout of the tournament, the 125kg final, belied the historical significance of it.

Modzmanashvili, a London 2012 Olympic bronze medalist for Georgia, took a 4-0 lead with an early takedown to a roll, then gained a point when Sakandelidze was on the activity clock in the second period, when the two giants seemed to have little desire to expend further energy.

Although it took an import to gain a spot on the medal podium, Qatari officials were ecstatic with the result.

"After a long period, this is a big success for Qatar wrestling federation, for Qatar," said team leader Vardan Ghazaryan. "For the first time in senior championships, after more than 50 years, we take such success. Qatar is very proud and it will advertise wrestling to include more young schoolboys for developing wrestling in Qatar."

Ghazaryan said the federation has high expectations for Sakandelidze, who he said has lived in Qatar for two years.

"This is, of course, his first match for Qatar, but you will see his success and medals, gold medals, in the future."

Among the bronze-medal matches, Daniyar KAISANOV (KAZ) overcame an 8-3 deficit with 45 seconds remaining, scoring the winning takedown in the final seconds to defeat KIM Daisung (KOR), 11-8, at 74kg.

Kim, who clearly ran out of gas down the stretch, is a 40-something high school wrestling coach who came out of retirement to make the national team, according to a South Korean federation official.

Kazakhstan, Uzbekistan, Iran and China all came away with two bronze medals on the night, while host Kyrgyzstan and Mongolia had one each.