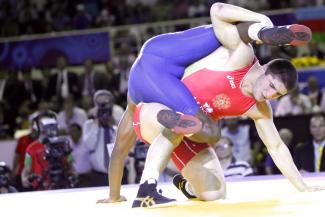 But, it was bantamweight YANG Kyong-Il who emerged from the battle of former world champions to claim the 57kg crown and claim his second world title after winning the 55kg title in 2009.

Yang triumphed over European champion and top-ranked Vladimir KHINCHEGASHVILI (GEO) in the final after overcoming a five-point deficit in the semifinals to defeat defending champ Hassan RAHIMI (IRI). In the quarterfinals, Rahimi pinned 2010 and 2011 world champ Viktor LEBEDEV (RUS) in the quarters.

Russia’s two winners Khetik TSABOLOV (RUS) at 70kg and Abdulrashid SADULAEV (RUS) both opened their championship bouts with fireman’s carry throws and wrapped up their first world championship titles in the first period.

Tsabolov dropped Yakup GOR (TUR) off the whistle to begin their bout and rolled up a 10-0 win at 1:45.  Sadulaev, meanwhile, scored with a quick carry, then a tilt on his way to a 10-0 triumph at 1:25 over Reineris SALAS PEREZ (CUB).

Earlier, Khadshimourad GATSALOV (RUS) came up short in his bid for a seventh world-level title when he ran out of gas in the 125kg semifinals and fell 5-4 to Ghasemi. Gatsalov, however, bounced back in the bronze medal final, pinning Aleksander KHOTSIANIVSKI (UKR) in 45 seconds.

Summary of the medal finals:

57kg – Trailing 2-3 in the second period, Yang rolled Khinchegashvili with a front headlock and turn for a 4-3 lead, but also appeared to be stopped on his back. No challenge came from the Geogian’s corner and the bout ended with a force-out point for Yang.

In the bronze medal finals, deposed champion Rahimi trailed on criteria to 2010 Youth Olympics champion Yuki TAKAHASHi (JPN), but rallied with a low-single and a force-out for a 7-4 win. Vladislav ANDREEV (BLR) scored the final point in a 1-1 bout with ERDENEBAT Bekhbayar (MGL) for the win.

70kg – Tsabolov scored four points off an arm-and-leg throw for four and cruised to the gold medal with the technical fall over Gor.

Local favorite Bekzod ABDURAKHMANOV (UZB) had fans on the edge of their seats with his counter-style of wrestling and a 7-3 win over Zalimkhan YUSUPOV (TJK). Ali SHABANOV (BLR) won his second world bronze medal with a 13-1 technical fall over Cleopas NCUBE (CAN).

86kg – Sadulaev appeared to stun 2013 world silver medalist Salas Perez with his early throw and never allowed his opponent to recover with tilts and a go-behind to finished the bout.

In the bronze medal bouts, Selim YASAR (TUR) scored with a single-leg early and added a counter takedown in the second for a 5-2 win over Asia silver medalist Azlan KAKHIDZE (KAZ). After a slow start, Mohammad Hossein MOHAMMADIAN (IRI) pulled away from Gamzat OSMANOV (AZE) for an 11-2 win.

125kg – Akgul received two penalty points and worked a low-single attack for a 4-0 lead and then held on for a 4-3 win, with Ghasemi on his leg in the closing seconds.

In the bronze medals bouts, Gatsalov used an inside-leg trip to drop Khotsianivski to his back and then press for the fall at 0:45. Tervel DLAGNEV (USA) scored a first period takedown and held off 2011 world champ Aleksey SHEMAROV (BLR) for his first world medal since 2009. 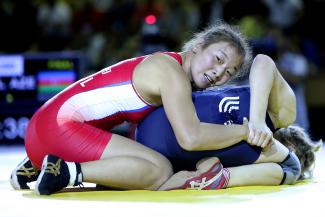 INCHEON, Korea (September 27) – World champions Eri TOSAKA (JPN) and SUN Yanan (CHN) appear headed for a showdown at 48kg on the opening day of wrestling competition at the Asian Games on Saturday.

Also featured in Saturday’s world champion showcase will be SUKHEE Tserenchimed (MGL), who won the 60kg crown in female wrestling at the world championships in Tashkent earlier in the month.

The only weight category without a world champion to be contested on the first day is 70kg in men’s freestyle, where world bronze medalist Bekzod ABDURAKHMANOV (UZB) could face a rematch with Mostafa HOSSEINKHANI (IRI) in the semifinals.

48kg – Tosaka repeated as 48kg world champion in Tashkent, while 2013 world champ at 51kg Sun was largely inactive this year – except for a World Cup appearance in which she was edged 6-4 by Tosaka.

Yun opens in the top half of the bracket with Asia champion Tatyana AMANZHOL (KAZ), while Tosaka faces a potential quarterfinal pairing with Asian runner-up ERDENESUKH Narangerel (MGL) and a semifinal showdown with 2013 Asia champion PAK Yong-Mi (PRK).

63kg – Sukhee’s biggest obstacle to reaching the finals could well be Rio WATARI (JPN), who will try to show she is better than her one-and-done showing in Tashkent against former world champion SORONZONBOLD Battsetseg (MGL).

From the lower half of the bracket, 2013 Asia champion XILUO Zhuoma (CHN) and 2013 world bronze medalist Ekaterina LARIONOVA (KAZ) could meet in the semifinals for a chance to meet Sukhee.

Rahimi could face Asian champion Rasul KALIEV (KAZ) in the semifinals for a chance to face the survivor of the crowded upper-half of the bracket.