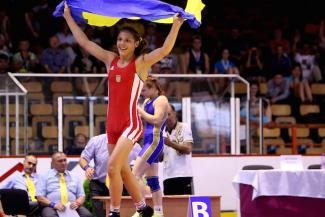 HUMENNE, Slovakia – Olena KREMZER (UKR) won her second cadet world title and Japan turned away a challenge from Ukraine and Russia for team honors on the final day of female events at the Cadet Wrestling World Championships.

Kremzer, one of three finalists from Ukraine at Humenne Hockey Stadium, scored a late snap-down and go-behind to come from behind and defeat European bronze medalist Alina KAZYMOVA (RUS), 4-3, in the 52kg final for a gold to go with her 2012 gold at 40kg and a 2013 silver at 46kg.

The victories by Tanabe and Igarashi gave Japan a total of five champions and three bronze medalists over two days for 77 points and the team title ahead of Russia with 65 points and Ukraine with 62.

In the day’s other finals, European champions Grace BULLEN (NOR) and Nicole AMMANN (GER) won titles at 60kg and 70kg, besting challengers from May’s European meet in Samokov, Bulgaria.

In the bronze medal bouts, European silver medalist Aleksandra SKIRENKO (RUS) could not finish a nearfall situation in the first period against Derya KAYAR (TUR) but came back with a hip toss in the second for the fall at 3:06.

European champion Turkan NASIROVA (AZE) secured a fall at 1:45 over Annika WENDLE (GER) for one bronze medal and Morgane GERARD (ITA) scored a go-behind takedown midway through the first period and made it stand for a 2-1 win over Beata KOSLA (POL, 13w5) for the second bronze.

Haruna OKUNO (JPN) cranked Gabriella GARCIA (USA) over an arm bar and pressed for the fall at 1:49 for one of Japan’s bronze medals while Elena BRUGGER (GER) made sure an early go-behind was enough against Arianna CARIERI (ITA) for German’s first medal of the evening.

60kg (20 entries)
In a repeat of the European championship final in May, Grace BULLEN (NOR) scored a single-leg takedown and a series of force-outs over

Klippan Open winner Yukako KAWAI (JPN) rebounded from a semifinal loss to Bullen to claim Japan’s second bronze medal of the evening with an 11-0 technical fall over Emma JOHANSSON (SWE).

European bronze medalist Anzhelina LYSAK (UKR) whipped Paulina NASTAROWICZ (POL) to her back early and held for the fall at 1:20 in the other bronze medal final.

70kg (17 entries)
European champion Nicole AMMANN (GER) rolled up at 10-0 lead against European bronze medalist Natalia STRZALKA (POL) and then held for the fall at 2:56 for Germany’s first gold medal in the women’s events since Brigitte WAGNER (GER) won at 40kg in 1998.

Olga ZENNA (BLR), only 11th in the 2012 European championships, notched her third victory by fall for the day against Lisa NEUMAIER (AUT) with an over-and-under lock and drop, with the slap of the mat coming at 1:02 for one bronze medal.