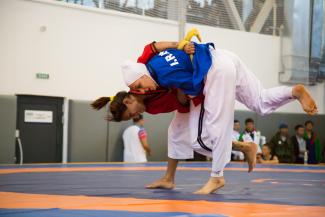 CHOLPON-ATA, Kyrgyzstan (September 07) -- Turkmenistan claimed first place in both men and women freestyle Alysh on the first day of the Belt Wrestling Alysh World Championships, taking in a total of eight gold medals.

Day one of the Belt Wrestling Alysh World Championships ended victorious for Turkmen women having not made any serious mistakes in four finals of Alysh WFS.

Losing only one point from all her matches was the key to Zuhra Madrajmova’s podium topping result at 60 KG. In a close match Somayeh Heidari (IRI) managed to beat Russian Alena KALUGINA before she meets Madrajmova in the final. Bronze medals of the 60 KG went to Kalugina and Meerim MOMUNOVA (KGZ)

While Gulnar HAJIBAEVA (TKM) ended the day with 10-0 over Sabira MIRZAGALIEVA (KAZ) at 65 KG Belarus and Azerbaijan earned their first medal of the tournament by winning a bronze medal.

Iran’s Maryam AHMADI endured a tough day winning two matches by fall against Asian DOKTURBEK of Uzbekistan and Nazgiz IBRAHIMOVA of Azerbaijan at 75 KG. Nasiba SURKIEVA extended Turkmenistan’s  victory by winning over Ahmadi in the final. 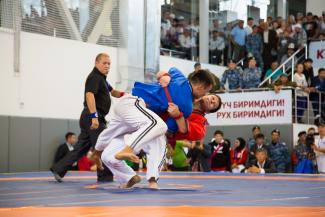 Six countries sent wrestlers to the finals of Alysh Men’s Freestyle on the first day of the Belt Wrestling Alysh World Championships. Alysh belt wrestlers of Turkmenistan dominated the highest stage of four podiums 60, 70, 90 and +100 KG while Kazakhstan and Uzbekistan captured the remaining gold medals at 80 and 100 KG respectively.

Spending 49 seconds on the mat, Chatluk ZHUMANAZANOV (TKM) topped the 60 KG winning four matches by fall. While the silver medalist, Didar SATBAEV (KAZ) had to give up the final in 22 seconds, local favorite Erlanbek MURZABEKOV recorded the shortest match of tournament being thrown on his back in 2 seconds in the semifinal against Zhumanazanov. Murzabekov shared the bronze medal with Danil BIKTIMIROV (RUS)

Being more successful in heavy weight categories Iran achieved the third team title. The final of 90 KG where Davood AVAZ (IRI) met Gylych JUMAYEV (TKM) both wrestlers put in a solid fight ending to 2-2. In the course of a difficult fight Jumayev gained victory by fall.

The final match of 80 KG became the battle between Ersultan Muzaparov (KAZ) and Kamoliddin MANKAMOV (UZB) where Kazakhstan earned their sole gold medal on the day one of the tournament. Igor BESLEAGA (MDA) and Yaser MOHAMMADI ROSTAMI (IRI) stood on the third place of the 80 KG.

Holding the World Akysh Belt Wrestling Championships under the supervision of UWW has already enabled many athletes around the world to show their skills better than ever. “The level of athleticism was so high and I am finally seeing myself on a right way. It motivated me into working harder to achieve gold medal next time,” bronze medalist Yeganeh Gharib said.