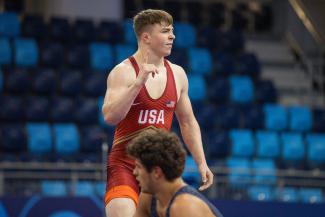 BUDAPEST, Hungary (July 19) --- As soon as James MULLEN (USA) won his semifinal at 110kg, his USA teammate James ROWLEY (USA) began calculating the team scores. “That's 80 points,” he would shout to his team in the warm-up hall.

USA took a huge step towards the team title at the cadet World Championships which got underway in Budapest Monday as they entered four wrestlers in the five finals for Tuesday, the most for any country. India were the second best behind USA with two finalists while Russia, Iran, Georgia and Kazakhstan sending one each. Wrestlers from USA and India will meet in the two finals – 48kg and 80kg – on Tuesday.

That gives them a 30-point lead going into Tuesday which will see five more freestyle weight classes in action apart from the medal bouts of 48kg, 55kg, 65kg, 80kg and 110kg.

Two 15-year-olds made it to the final of 48kg in contrasting fashion as Pan Am champion Luke LILLEDAHL (USA) registered a thrilling win in the semifinals while Aman GULIA (IND) dominated his semifinal to win in a minute and five seconds. 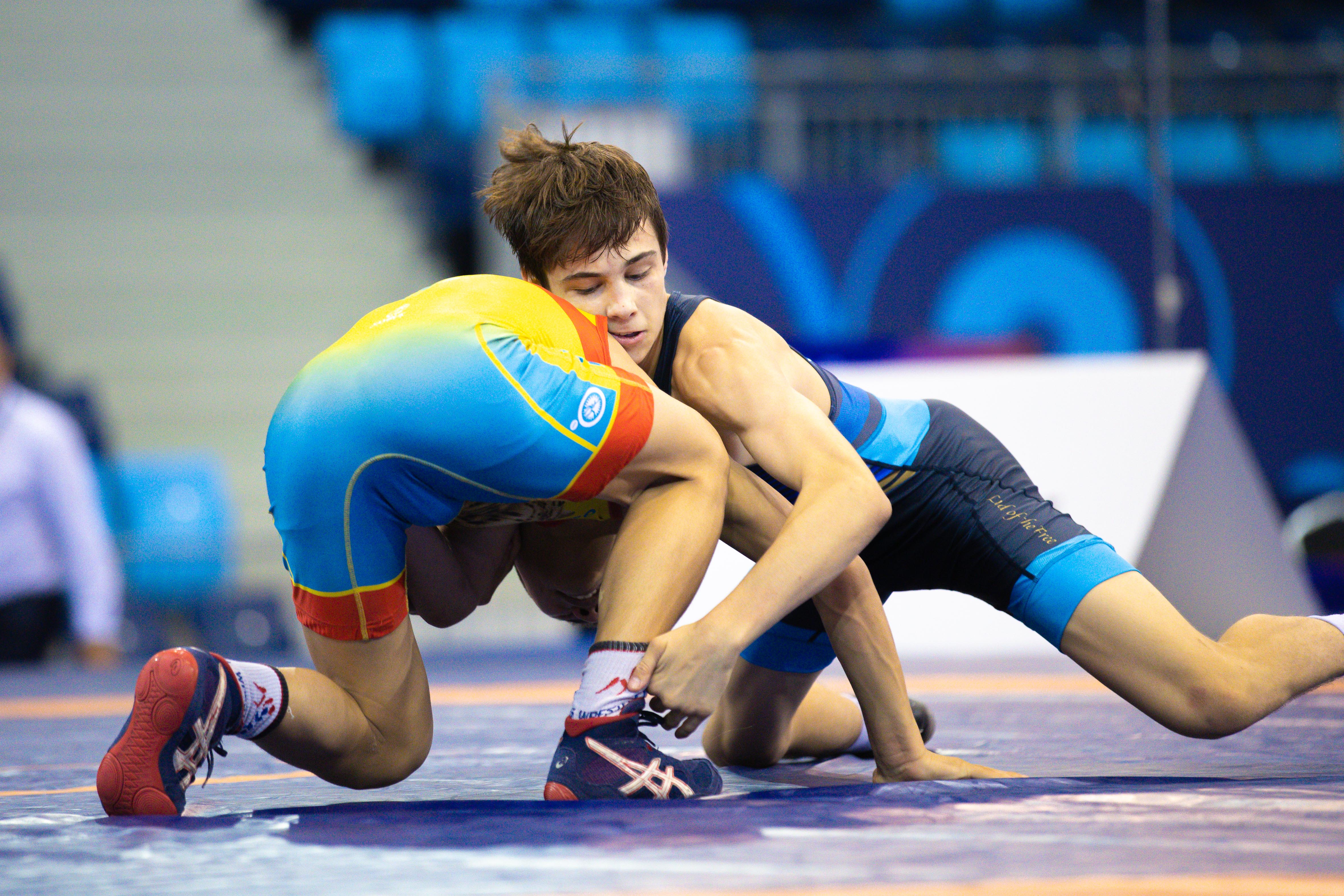 Lilledahl, who trains in Missouri, will be looking to give himself an early birthday present, hopefully a gold, as he turn 16 years old in two weeks' time. He had a tough day in office as he began with a stunning 9-9 win over Akhmad MUSAKHADZHIEV (RUS) which saw USA challenge a call and winning it. He then handled Azim ABDYKALYKOV (KGZ) 8-1 before beating Nurdanat AITANOV (KAZ) 4-3 in the semifinals. He needed a late takedown with a double to win the bout.

Assessing his bouts, Lilledahl said he could have done better but he is now preparing for his final against India.

“[My wrestling was] not the best and I still have work to do,” Lilledahl said. “I am representing my country so I have to do my best no matter what. [For the final], just prepare mentally and watch some videos.”

Gulia went for a leg-lace to finish his opponent Rezo MARSAGISHVILI (GEO) 10-0 in the semifinal. In the morning session he had conceded only one point while scoring 14.

The Indian stayed back to watch Lilledahl's semifinal and observed a few things before the two meet in the final on Tuesday.

“He only shows false attack and dodges,” Gulia said. “I'll watch his videos from today and then prepare for final.”

At 55kg, the weight class where USA did not have a finalist, saw Russia and Kazakhstan advance. Magomed BAITUKAEV (RUS) had a few slip ups in the semifinal against Abdullah TOPRAK (TUR) but eventually managed to win 10-6.

The wrestler from Chechnya was unfazed by the occasion of a World Championships final and said he will prepare for it as he does for any other bout.

His opponent, Abdinur NURLANBEK (KAZ) looked in the zone as he defeated Vaibhav PATIL (IND) 6-4 in the semifinals. Earlier in the day, he had defeated returing fifth-place and 2021 cadet European silver medalist Javi JAVIDOV (AZE) 10-0.

Nurlanbek challenged a takedown from Patil which had given Indian the lead. Kazakhstan won the challenge and kept off Patil's late attacks for the win.

Patil had earlier in the day ended the hopes for cadet European champion Andranik AVETISYAN (ARM) with a cradle pin despite the Armenian leading. He also pulled off a four-point throw in the dying seconds against Husanboy USMONOV (UZB). But his strategy did not work against the Kazak. 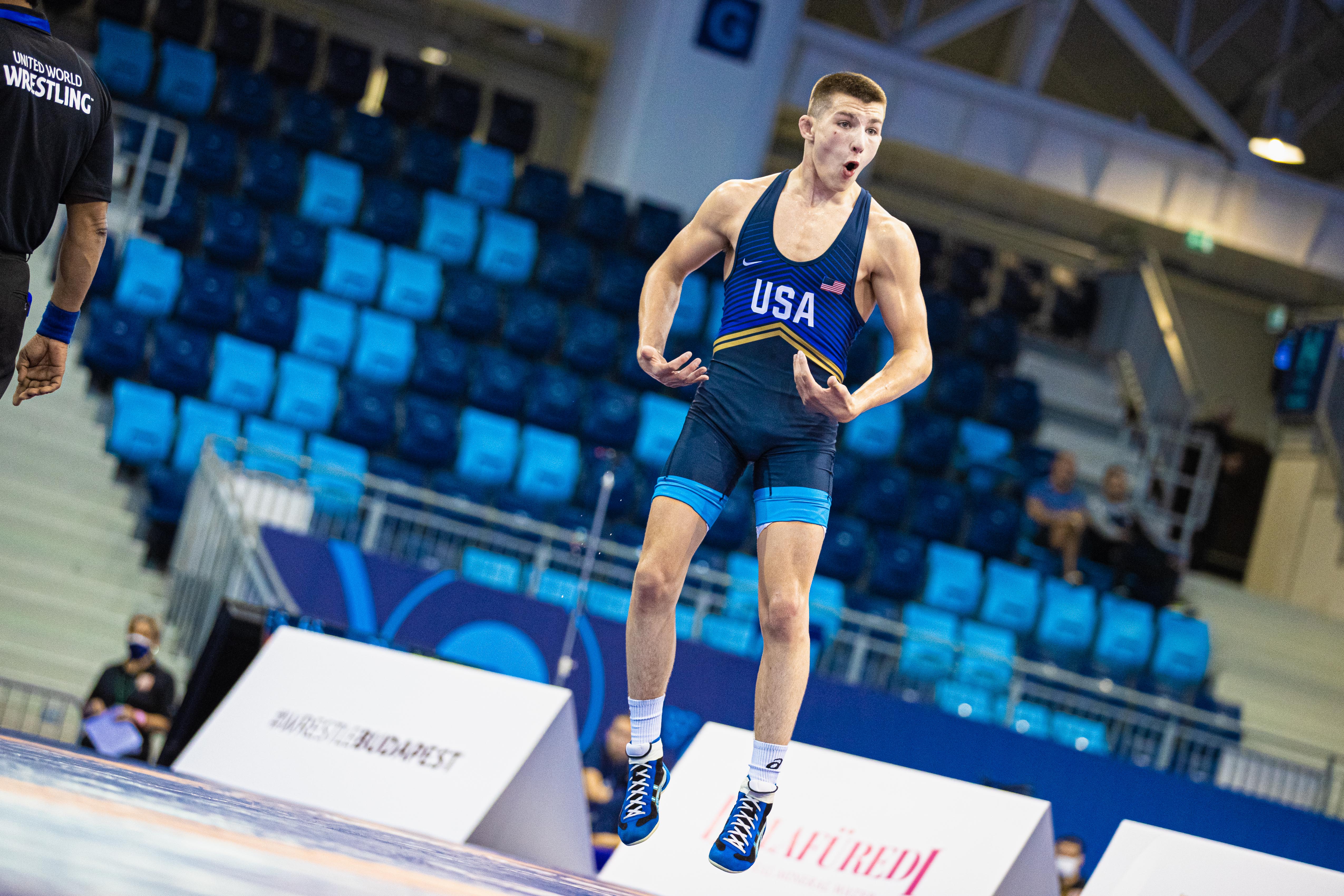 After a pin to start his day. Shapiro wrestled Khabib ZAVURBEKOV (RUS) and both exchanged attacks before Shapiro went for a final one. He managed to come out on top 8-6 but such was the intensity of the bout that he thought he had lost.

“My second match was super tough,” Shapiro said. “Definitely the best kid in the bracket. Honestly, anything could have happened in the end and I thought I lost because I could not see the score board. I was freaking out but turns out I had won. Later, I brought the pieces together and wrestled hard in the semifinals.”

He did not waste any time in the semifinal to handed a 10-0 defeat to Aghanazar NOVRUZOV (AZE).

Gogritchiani, who trains in Racha, had a contrasting semifinal as he defeated Ali REZAEIAGHOUZGELEH (IRI) 6-6 after a successful challenge to reclaim his lead in the final minute. Two points were awarded to Iran but Georgia challenged the call and instead, the two points were awarded to Gogritchiani. The Iran wrestler did get two stepouts but those were not enough for the win.

“I wrestled very well,” he said. “In the last match with the Iranian I was sure I won those two points in the challenge. In tomorrow’s final I’ll do my best to get the gold medal.”

When Shapiro was asked who he is going to prepare for the final, he said he wanted to relax.

“I am not really worried about that,” he said. “I will watch a film [of Gogritchiani] and whatever happens, happens.”

Another India-USA was set at 80kg as Rowley made his way to wrestle Sagar JAGLAN (IND), defeating a Russian wrestler on the way. 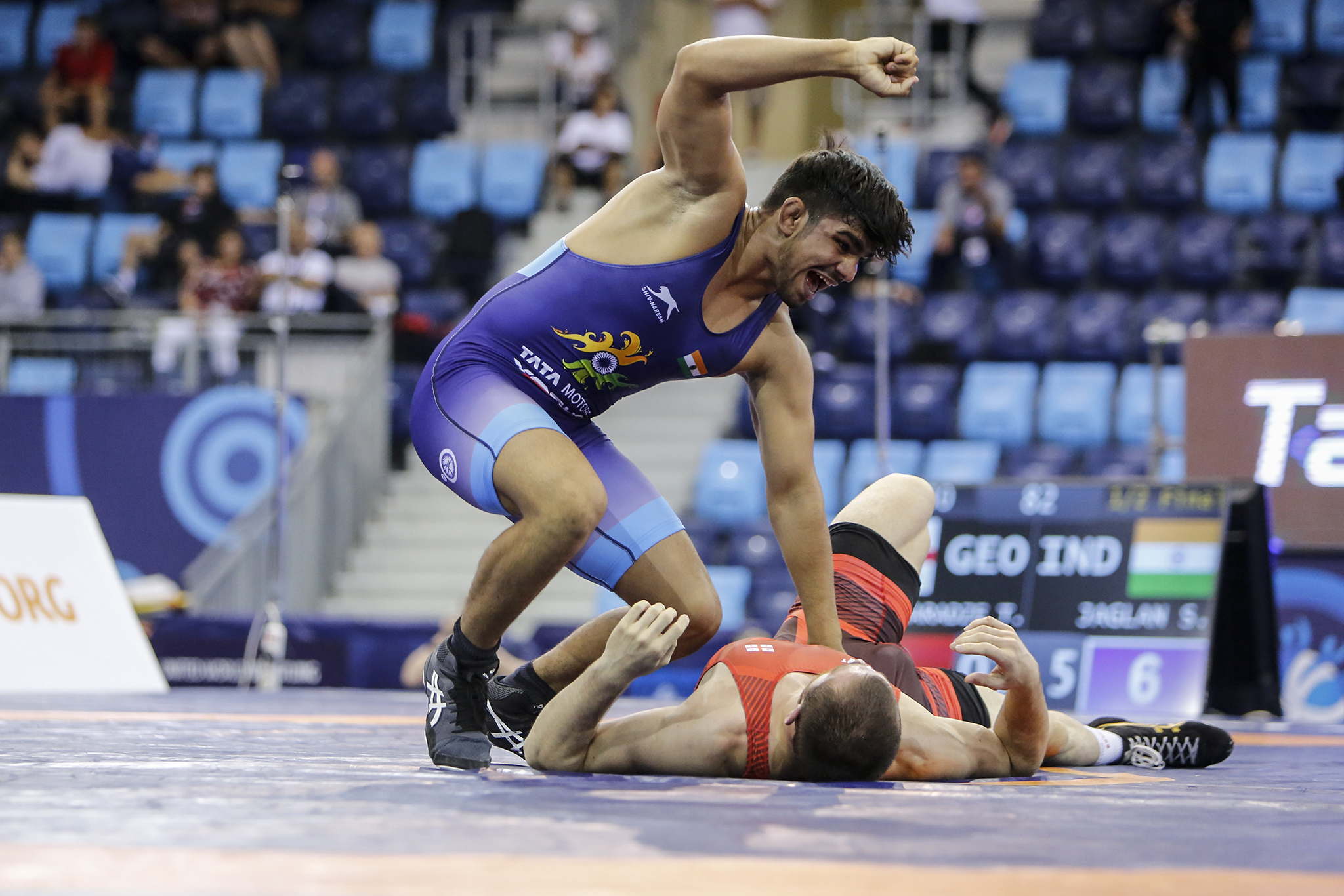 Rowley was slow to start as he wrestled Mustafagadzhi MALACHDIBIROV (RUS) in the 1/8 finals. A late takedown was what gave him an 8-6 win. In the quarterfinals, he picked up pace and defeated cadet European champion Oleksandr MAMROSH (UKR) before getting a technical superiority win over Gabriele NICCOLINI (ITA) 12-2.

“It kept getting better [for me],” Rowley said. “ My first match was slow and second was a little better. In the third, I blew him out of water.

“For the final, I will get the mindset right and win.”

He will face Jaglan in the final who won three out of his four bouts after trailing initially. But that was just another example of the exceptional motor skills of Indian wrestlers, made popular by Bajrang PUNIA (IND).

In the semifinal against cadet European Championships semifinalist Tornike SAMKHARADZE (GEO), he was trailing 4-6 as the Georgian struggled to catch his breath. Jaglan managed to put him on his back and get the fall.

A similar story saw him beat Radomir STOYANOV (BUL) in opening round. The Indian was trailing 1-9 but rebounded against a panting Stoyanov to win 15-10. Then against Musza ARSUNKAEV (UWW), he took advantage of a tiring opponent to win 14-9. A 12-4 win against Sattarkhan ALLAHVERDILI (AZE) earned him a place in the semifinal.

“Before coming here, I trained two months for this competition and I had great bouts,” Masoumi Valadi said.

He will face Pan-Am champion James MULLEN (USA) in the final. Mullen defeated Alikhan KUSSAINOV (KAZ) 7-1 in the semifinal. 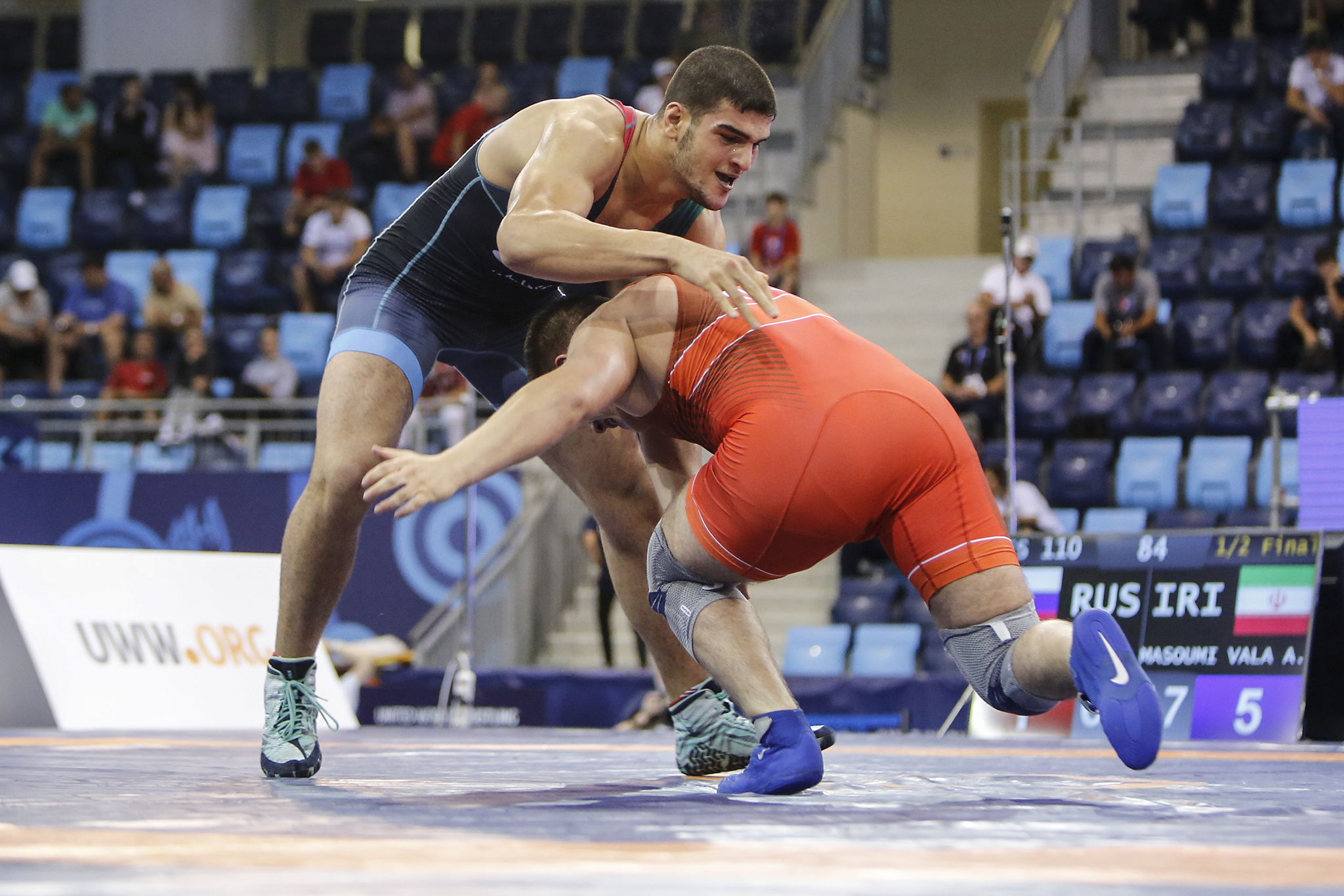 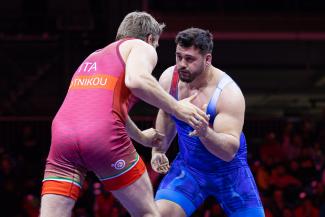