With Support of Community, Al Obaidi is Painting a Bright Future 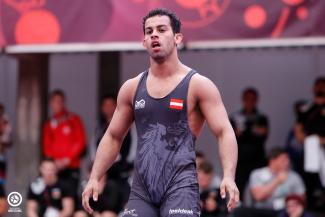 INZING, Austria (June 20) -- Aker Al Obaidi had been working as a painter for two years before Benedikt "Mo" Ernst finally convinced the young Iraqi refugee to move to the small town of Inzing, Austria.

To help, Coach "Mo" furnished an apartment for Al Obaidi and set up the young Greco-Roman grappler with a series of training opportunities. After a few weeks of acclimating to the new city, Al Obaidi invited Mo over for dinner and showed him the job he'd done painting the apartment.

It was not what Coach was expecting. Greeting him in the living room was the large five-ring logo of the Olympic Games.

"I painted the Rings on this wall because I want to see them every day," said Al Obaidi. "This is my motivation to work as hard as I can and reach my goal!“

Shortly after painting the Rings on his wall AL Obaidi and Coach Mo received word from the IOC that they had chosen Al Obaidi for the IOC Refugee Athletic Scholarship and would be supporting his Olympic journey.

Members of the Austrian national team who live in Inzing have helped provide Al Obaidi the training he needs to prepare for the Olympic Games, as he also attends every camp and tournament of the Austrian wrestling federation.

Al Obaidi's training during COVID has been difficult since he's not allowed to train in the training hall. Instead his coach has organized a special program for him to maintain his shape.

"He is one of the motivated guys I have," said Mo. "He has developed his strength and endurance very well during this hard time."

Like most of the wrestling world Al Obaidi isn't quite sure what will happen with COVID-19, but for now he plans to start wrestling training once cleared by the Austrian government - maybe as early as July.

The plans then include training camps and possibly trips to the U23 Europeans in Bucharest at the beginning of October and the U23 World Championship in Finland. If he's very lucky with travel arrangements, maybe some international training camps in Hungary, Germany and Ukraine between tournaments.

"He works hard and I know if Aker qualifies for the Olympics in Tokyo 2021," said Mo. "His dream will come true."

United World Wrestling recently caught up with Olympic hopeful and Syrain refugee Amir Al-Awad. Until recently he used to train at the Olympic Club in Alexandria, but since the suspension of all sports activities due to COVID-19, all clubs in Egypt are closed since mid-March 2020. He is hopeful to resume some activities by the start of July, but throughout the lockdown period as of mid-March, Al-Awad has been training at home with a private coach to keep fit and not lose his momentum.

Right now Al-Awad says his main goal remains to prepare for the 2021 Olympic Games and the relevant qualification competitions. As such he will keep on training privately and cope with the challenging situation we are all facing until things return back to normal.

To read more on Al-Awad's life check out this snippet from June 1st feature on Olympic.org

Amir Al-Awad, an 18-time Syrian champion, had consigned wrestling to the past when he and his family were forced to flee their country in fear in 2011. But, after being inspired by the chance to show his fellow refugees that anything is possible, he returned to the mats.

Syrian Amir Al-Awad is grateful to wrestling. Even at his lowest moments, when grappling on a mat was far from his thoughts, the sport has remained ingrained inside.

Wrestling makes you face challenges and as a wrestler I was taught to be resilient and confront life, no matter what, explained Al-Awad, whose life was sent spinning by the outbreak of civil war in Syria in 2011. “If I am thrown to the ground or hit the bottom I have to come up and start afresh.”

Wrestling-obsessed since he was nine years old, the former Asian and Arab champion has come to embody this ethos. After his house was destroyed, Al-Awad and his family became internally displaced as war raged around them. The former professional sportsman was routinely arrested. Both warring sides were suspicious of his determination not to declare an allegiance. Finally, when once again in jail and unable to look after his then-pregnant wife, Al-Awad decided they had to leave.

His wife made it to Egypt and eventually so too did Al-Awad. Abandoning a plan to try to reach Europe, the couple began the arduous task of building a new life as legal refugees. But, despite three years spent focusing on finding a job and caring for his young family, wrestling found its way back in.

“It became a win-win situation,” said the 18-time national champion.

To read more on Amir Al-Awad's journey back to the mat please click here: Olympic.org)