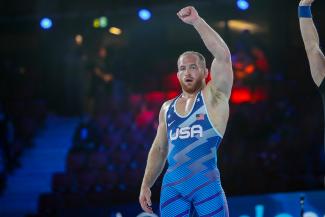 KRASNOYARSK, Russia (January 29) -- The third day of action at the '22 Grand Prix Ivan Yarygin just wrapped up. The stage is set for Sunday's finals matchups 74kg, 86kg, 92kg and 97kg, as reported by www.wrestrus.ru.

The 74kg bracket turned out to be a real "meat grinder." Two-time world champion Magomedrasul GAZIMAGOMEDOV (RUS) beat Nikita SUCHKOV (RUS) and David BAEV (RUS), but then lost to Chermen VALIEV (RUS), who reached the final. In the gold-medal bout, he will be opposed by Jason NOLF (USA), who in the semi-final knocked out the winner of the World and European Championships Timur BIZHOEV (RUS) in 45 seconds.

At 86kg, world medalist Akhmed GADZHIMAGOMEDOV (RUS) could not overcome the first round opponent. He lost to the representative of Kazakhstan Azamat DAULETBEKOV. Amanula RASULOV (RUS) made it to the finals from the top of the competition, where he will face Dauren KURUGLIEV (RUS), who had no equal today.

Finally, at 97 kg, Kyle SNYDER (USA) confidently reached the final, and in the main fight he will compete with Shamil MUSAEV (RUS), who defeated the world Elizbar ODIKADZE (GEO) in the semifinals. Note that Musaev has already won the Yarygin tournament - in 2019, while Snyder won in '17 and '18.

On the women's side of the competition, Sunday's finals were set for 72kg and 76kg. 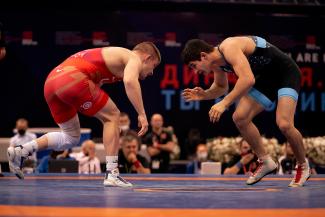 On the women's wrestling side of the competition, Russia, Mongolia, the United States, Azerbaijan and Kazakhstan shared the gold-medal wealth. Still, it was the host nation who claimed a tournament-best four titles.

The final pair of women's golds went to Alena KOLESNIK (AZE) and Elmira SYZDYKOVA (KAZ). They ended the competition atop the podium at 59kg and 76kg, respectively.