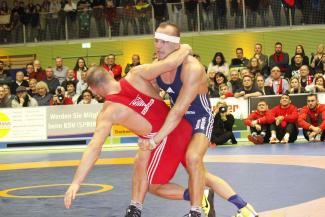 Wrestlers and coaches on the SV Germania Weingarten bench could not contain their excitement at the final buzzer of Staebler’s Greco-Roman victory at 75kg, storming the mat and burying the world champion under a tidal wave of bodies.

KSV Ispringen actually won the second-leg dual 13-11 on a fall by Khakhaber KHUBEZHTY (RUS) over Georg HARTH (GER) in the freestyle bout at 75kg. Weingarten, however, had won the first leg of the home-away series 13-9 on January 7 and enjoyed a four-point advantage coming into Saturday’s final.

“It was really close with a better end for us,” Weingarten coach Frank Heinzelbecker said after the ceremonial champagne shower. “It was a complete team effort that helped us win the final and the title.

In an unprecedented act, the Weingarten wrestlers invited their rivals from Ispringen to join them in the post-dual award ceremony photograph. 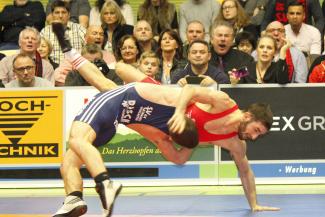