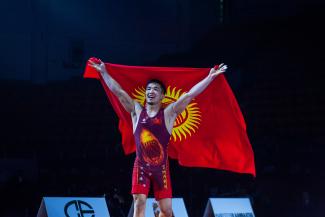 ULAANBAATAR, Mongolia (April 20) -- After watching his cousin become a first-time Asian champion the day before, world silver medalist Zholaman SHARSHENBEKOV (KGZ) was determined to do the same.

The 22-year-old did just that, matching kinsman Tynar by winning the Greco-Roman 60kg title when Mehdi MOHSEN NEJAD (IRI) defaulted in the second period of the final due to injury on Wednesday, the second day of the six-day Asian Championships at the Buyant Ukhaa Sports Palace.

“Thanks to God this Asian Championships has been successful for us,” a jubilant Sharshenbekov said. “We have been preparing for this tournament with the whole team for quite a long time. With God's help, we will win the Olympics many times in the future as well.”

Sharshenbekov had built up a 4-0 lead and was in control when Mohsen Nejad was forced to stop due to a painful left side injury with 1:40 left in the match, making him settle for a silver medal for the second straight year.

Even with Iran coming away with the three other gold at stake, it was Kazakhstan that walked off with the team title with 190 points thanks to five silver medals to go with its two gold. Iran was second with 176 points, followed by Kyrgyzstan in third with 148.

In the 60kg final, Sharshenbekov gained a passivity point in the first period but was unable to turn Mohsen Nejad. In the second period, Sharshenbekov again gained the par terre position and this time he was able to roll his opponent for a 4-0 lead.

Mohsen Nejad came up holding his side and received treatment from the tournament doctor. He continued the match, but soon after the pain became too unbearable and he conceded with 1:38 left.

“All the opponents are very tough,” said Sharshenbekov, who finished seventh at the Tokyo Olympics. “I was getting ready to wrestle against each of them as if he was the strongest one."

His victory, which ended a run of second-place finishes over the past four years -- two each at both the World and Asian Championships -- completed a remarkable two days for the Sharshenbekov clan. On Tuesday, Tynar Sharshenbekov won the 63kg gold.

“Thanks a lot to my brother,” Zholaman, referring to Tynar, who is three years his senior. “He is the reason for all my results and achievements.”

“Akzhol is my close friend forever,” he said. “I take him as an example. We both participated in the Olympics and many other tournaments. I learn a lot from him.” 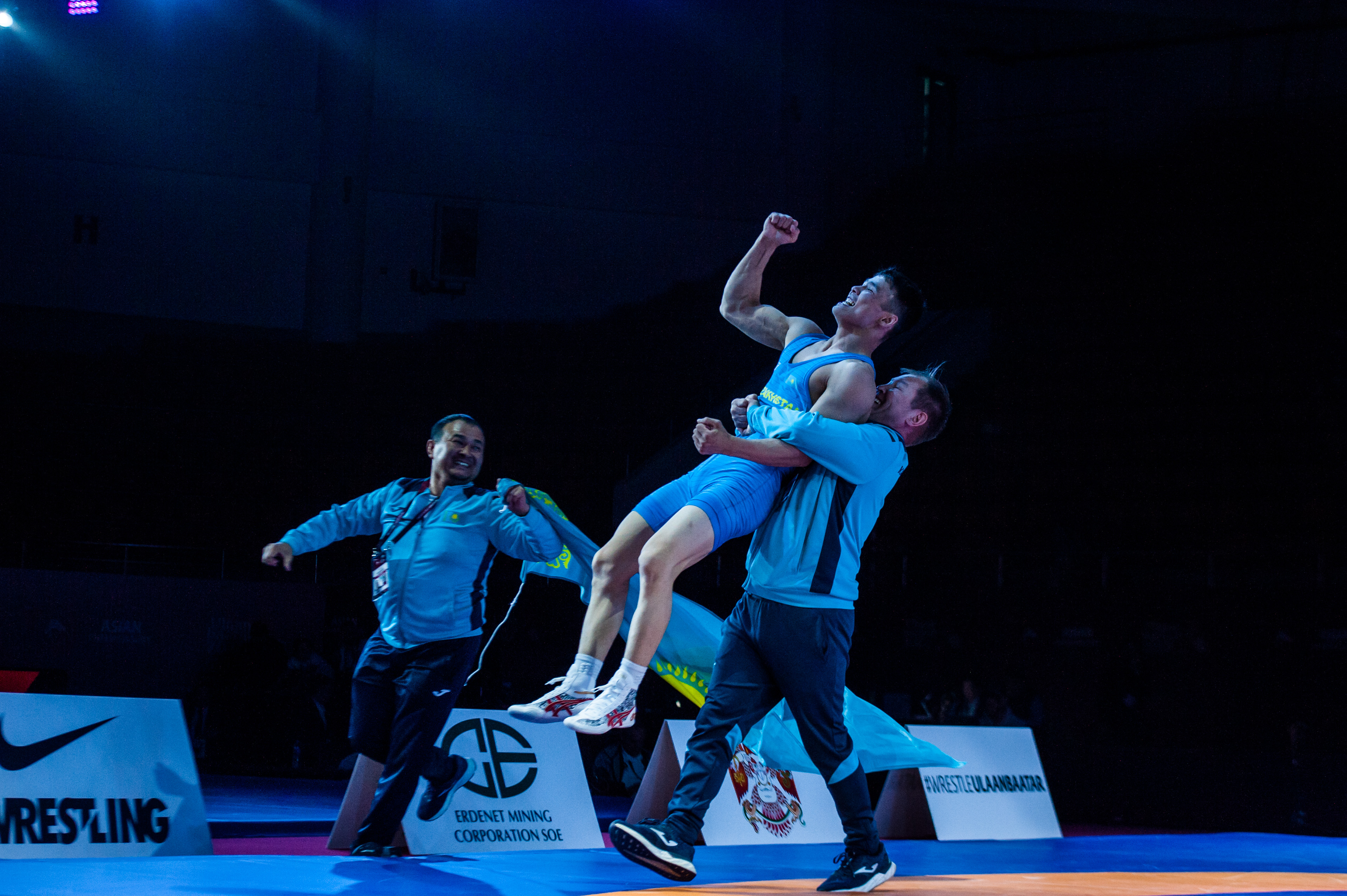 In other action, Meiirzhan SHERMAKHANBET (KAZ) notched arguably the biggest win of his career, chalking up an 11-3 technical fall over four-time champion Hansu RYU (KOR) in the 67kg final to avenge a loss to the Korean star in 2019 final.

Shermakhanbet, a world bronze medalist in 2018, took a slim 4-3 lead over the former world champion into the second period, before scoring a takedown off a counter.

From there, he latched on and executed a dazzling throw that was originally awarded four points but was changed to a match-ending five on the challenge.

“I wasn't surprised,” Shermakhanbet said of bringing the match to an early end. “I had to do so. I'm very happy. It's my second time meeting this guy [Ryu]. The first time I lost, so I paid off my debt.” 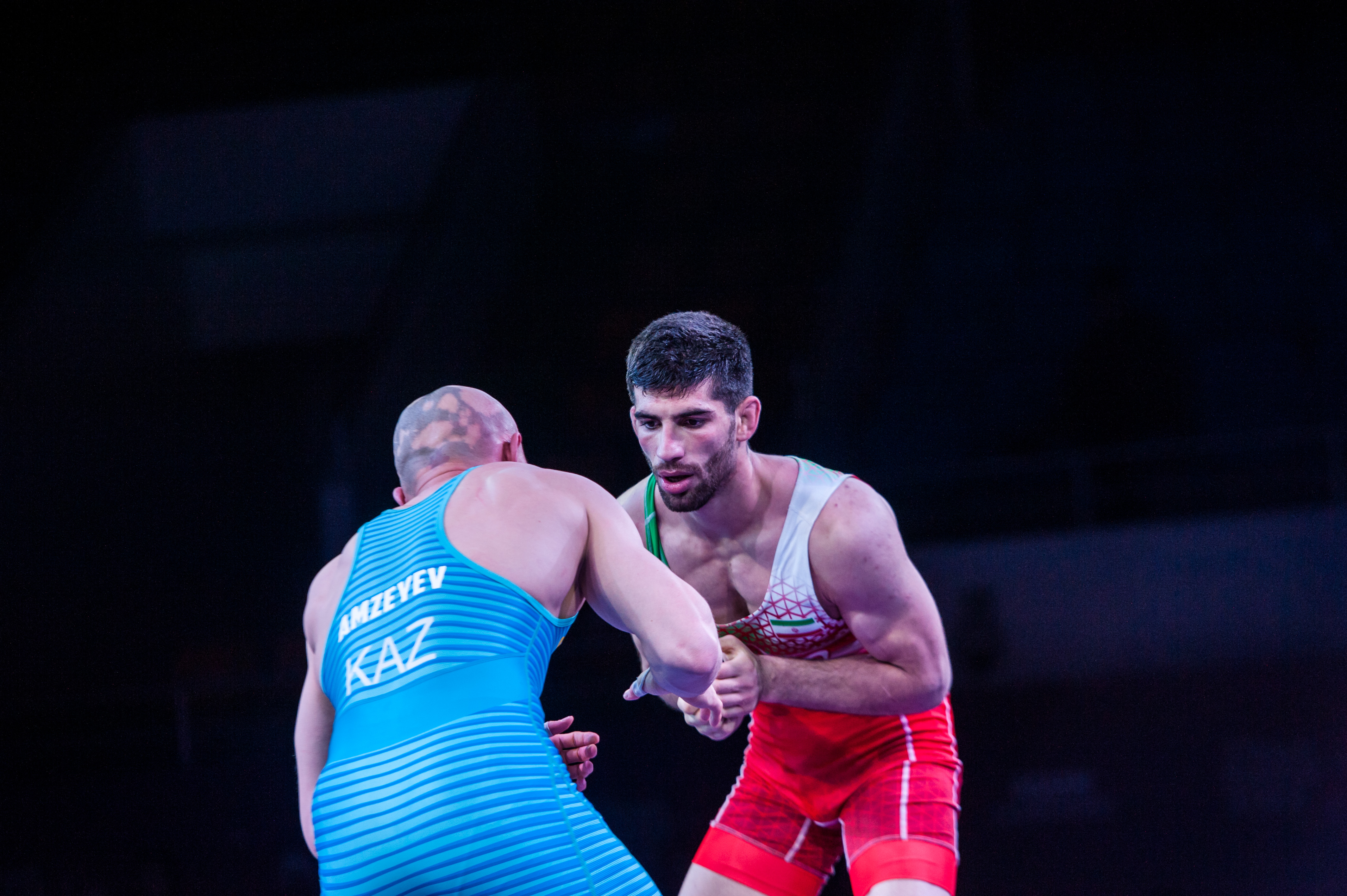 Iran monopolized the last three finals of the night, with Mohammad MOKHTARI (IRI) at 72kg and Rasoul GARMSIRI (IRI) at 82kg taking titles in their senior Asian debuts, and Medhi BALIHAMZEDEH (IRI) capping the Greco competition by successfully defending his 97kg crown.

Mokhtari scored a takedown and gut wrench late in the first period and held on for a 4-1 victory in the 72kg final over Abylaikhan AMZEYEV (KAZ).

In an earlier sequence, Amzeyev scored a four-point counter to the back that Mokhtari reversed before adding a two-point roll. But Amzeyev’s initial move was ruled a tackle below the waist, and all of those points were wiped off the board.

Mokhtari, a 2016 world cadet silver medalist, placed fifth at the 2021 World Championships, and now is aiming for a chance to return to the world stage in Belgrade later this year.

“I am glad to win the gold, it’s my first time at Asians,” Mokhtari said. “I began wrestling 12 years ago. My father was a wrestler and watching him wrestle got me excited to train in wrestling.

“I will now rest for one week and, if I qualify for the World Championships in Iran, I will train to win there.” 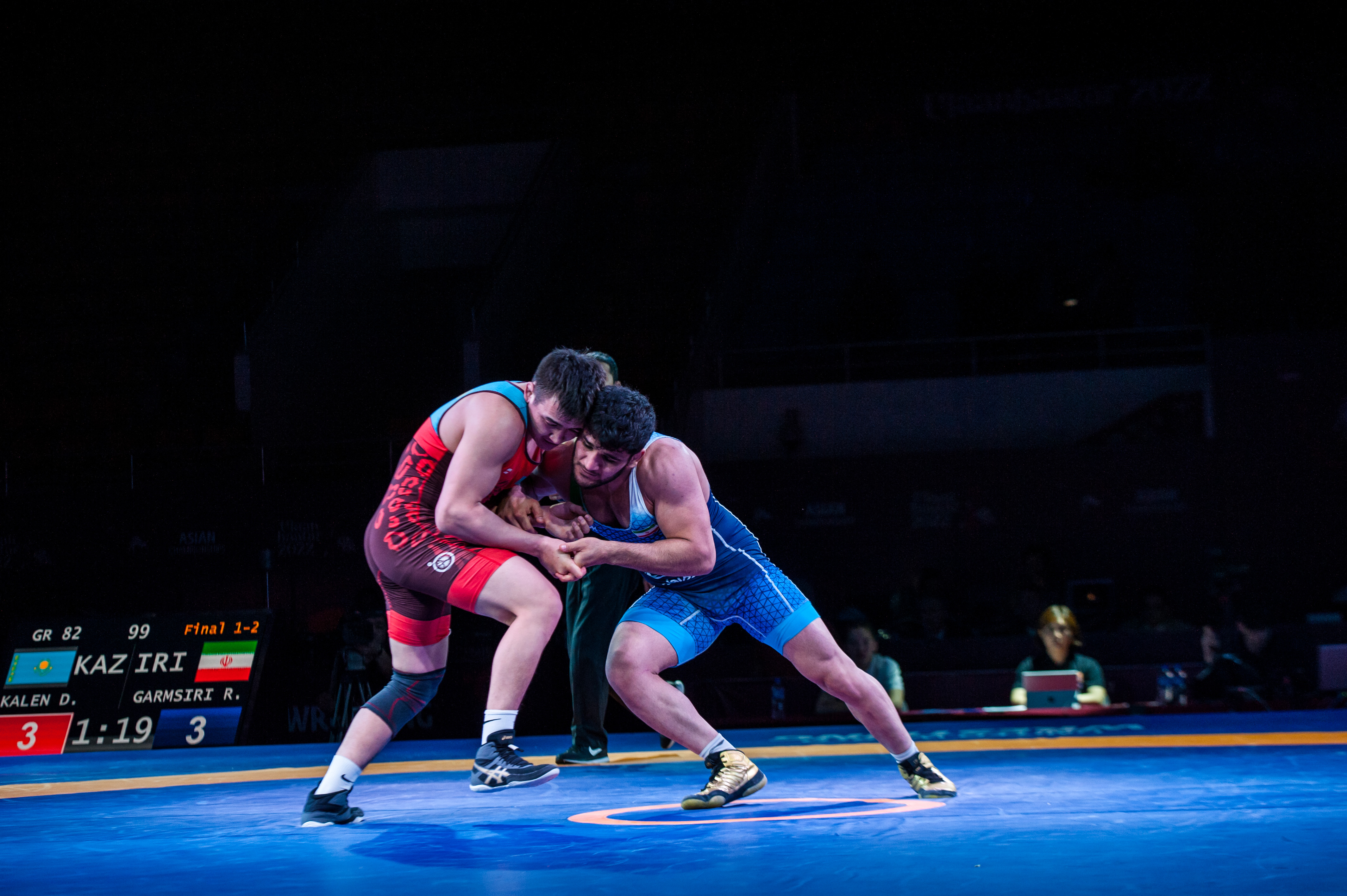 At 82kg, Garmsiri scored a stepout point with 1:08 left to clinch a 4-3 victory over Dias KALEN (KAZ) in the final of his first individual competition as a member of Iran national team.

Kalen gained the par terre position first and got two points with a throw that was otherwise well defended, but Garmsiri reversed him to his back to cut the lead to 3-2. In the second period, Garmiri gained a passivity point to go ahead on criteria, then secured the win with the stepout.

Balihamzehdeh’s final hurdle to a second straight 97kg gold came in the form of one of Asia’s most decorated active wrestlers in Rustam ASSAKALOV (UZB), but the Iranian was up to the task in forging a 5-1 victory.

“I fought with an expert who won a world medal and he was also in the Olympic Games,” Balihamzehdeh said. “Thank God I won.”

Balihamzehdeh took a 4-0 lead in the first period after receiving a passivity point, then scoring with a stepout and a two-point counter to a takedown. He added a stepout early in the second period, gave up a point on a lost challenge, then fended off all attempts in finishing off the win.

For Assakalov, who was third last year at 87kg, it was the eighth Asian medal of his career that includes three gold. The Russian-born 37-year-old is also a two-time world medalist and two-time Olympian.

In the bronze medal matches, host Mongolia’s last chance for a first-ever Asian medal in Greco ended with a valiant but unsuccessful effort by Baljinnyam TSEVEENRAVDAN (MGL), who dropped a 12-6 decision to Yernur FIDAKHMETOV (KAZ).

Fidakhmetov scored seven points from the par terre position in the first period, but Tsveenravdan ended the run with defensive two points and went into the break trailing 8-2. The Mongolian countered a back-drop attempt with a bear hug for four points, but Fidakhmetov reversed to the back, then added a roll to make it 12-6.

Japan, which failed to advance any of its wrestlers to the finals on the second day, went 4-for-5 in third-place matches, with Ayata SUZUKI (JPN) winning his second straight Asian bronze at  60kg.

Suzuki finished off an 11-0 technical fall over Gyanender DAHIYA (IND) with a four-point bear hug counter.

For Endo, it was a small consolation for his 6-2 loss in the semifinals to Korea’s Ryu.

“Looking at the tournament, I thought I could beat him [Ryu], who has been on top for a long time,” Endo said. “But I lost. He was able to stop what I do best. More than strong, he’s really good. The Asian Games are ahead, and I hope to get revenge there.”

At 72kg, Shogo TAKAHASHI (JPN) added to the bronze he won in 2019 with an 11-3 technical fall over Jiyeon LEE (KOR). Takahashi trailed 0-3 early on, but regrouped with a four-point throw,  then pulled away in the second period. The match ended on a two-point penalty for finger-grabbing.

Unheralded Takahiro TSURUDA (JPN) had a tougher time securing his first-ever international medal, taking advantage of a winded Sanzhar SERIKKAN (KAZ) to rally to a 6-6 victory on criteria.

Sachin SAHRAWAT (IND) took the other bronze at 67kg when he used a slick arm throw to send Makhmud BAKHSHILLOEV (UZB) to his back and secure a fall with :11 left in a match he had been trailing 2-3.

The 82kg bronze went to Mukhammadkodir RASULOV (UZB), who defeated Yuya OKAJIMA (JPN) 5-1, and Harpreet SINGH (IND), who picked up his fourth Asian bronze and fifth medal overall with a victory by default.

Correction: An earlier version of the story referred to Tynar as Zholaman's brother. We have updated it to correct the fact that the two are cousins

ULAANBAATAR, Mongolia (April 29) -- Japan came out all guns blazing at the Asian Championships after missing the previous edition due to travel restrictions. The women's team won the team title comfortably.

Here are the 10 finals from the women's wrestling at the Asian Championships.