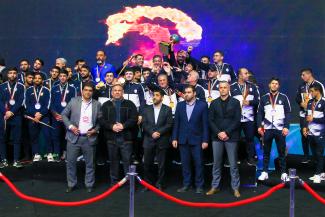 Meanwhile, Iran's '21 world bronze medalist Mojtaba GOLEIJ and Amouzad brothers were key wrestlers for the champion team. Despite the Sanaye team missing 92kg world champion Kamran GHASEMPOUR for the finals due to injury, '20 Asian silver medalist Ahmad BAZRI was a worthy successor for him and achieved two important victories.

“Yesterday I had an injury during the training and I didn’t want to wrestle against Ghiasi but the team decided to send me on mat.” Shakhiev said. He added, “Everything is in high level in Ira's  league but I am upset no to see Iranian fans in the hall. My motivation for coming Iran league was to wrestle in front of Iranian fans. Many expected to see my match with Amir Mohammad YAZDANI but his weight has moved up.”

Olympic 74kg silver medalist suffers deficit in 79kg
In the 79kg bout of the final match, '20 Olympics silver medalist in 74kg, Mahamedkhabib KADZIMAHAMEDAU suffered a narrow loss against Ali SAVADKOUHI and couldn’t help his team's chance at winning the team title. “I liked to compete with Kadzimahamedau. Today I had a good day and I was motivated for this match.” Savadkouhi said.

But, the Dagestani-born wrestler of Belarus won the battle against 2021 world silver medalist Mohammad NOKHODI from Aras team, 8-7 in the semi final match.

Easy day for heavy weight world champion, Zare
Reigning heavyweight world champion Amirhossein ZARE appeared on mat for Amol team and had an easy day. The Iranian wrestler who had been named United World Wrestling’s Breakthrough Performance of the Year award winner, had a 5-0 victory against Esmaeil NEJATIAN but it was not enough for his team to win the final match. Zare was also the winner of the semi final by forfeit.

“It was a great sense to win the award of Breakthrough Performance of the Year. It was my first year in senior level and I am glad for winning Olympic medal and world heavy weight title. I hope to repeat it for many years” Zare said.

“There were good wrestlers in Iran league and the organization of that was in high level. I'd like to compete again in the Iran league.” Bizhoev said. Asking about his future in the world of wrestling, he answered: “There is no difference where I compete. I want to be champion in all upcoming events.”

Two Technical Fall Victory for Naifonov in absence of Yazdani
Despite the contract of Iranian superstar Hassan Yazdani with Amol team, he didn’t step on mat during the final day while, his Russian rival Artur Naifonov celebrated two technical fall victories. “Yazdani suffered some injuries after two high level events, so we preferred not to see him on mat during the final day of the league” said Iranian freestyle head coach Pejman DOROSTKAT.

CORSIER-SUR-VEVEY (May 25) -- After the completion of four continental championships, United World Wrestling has released a new set of rankings. Wrestlers from all three styles around the world got a chance to improve their ranks which will help them attain seeds at the World Championships.

The European Championships kicked off the season in March followed by the Asian Championships in April before Pan-Am and African Championships rounded off in May. The top eight wrestlers who acquired the most points from the four Ranking Series events and the Continental Championships will earn a seed for September's World Championships, held in Belgrade, Serbia.

Here are the top performers in freestyle after the four tournaments. Full rankings can be accessed at uww.org 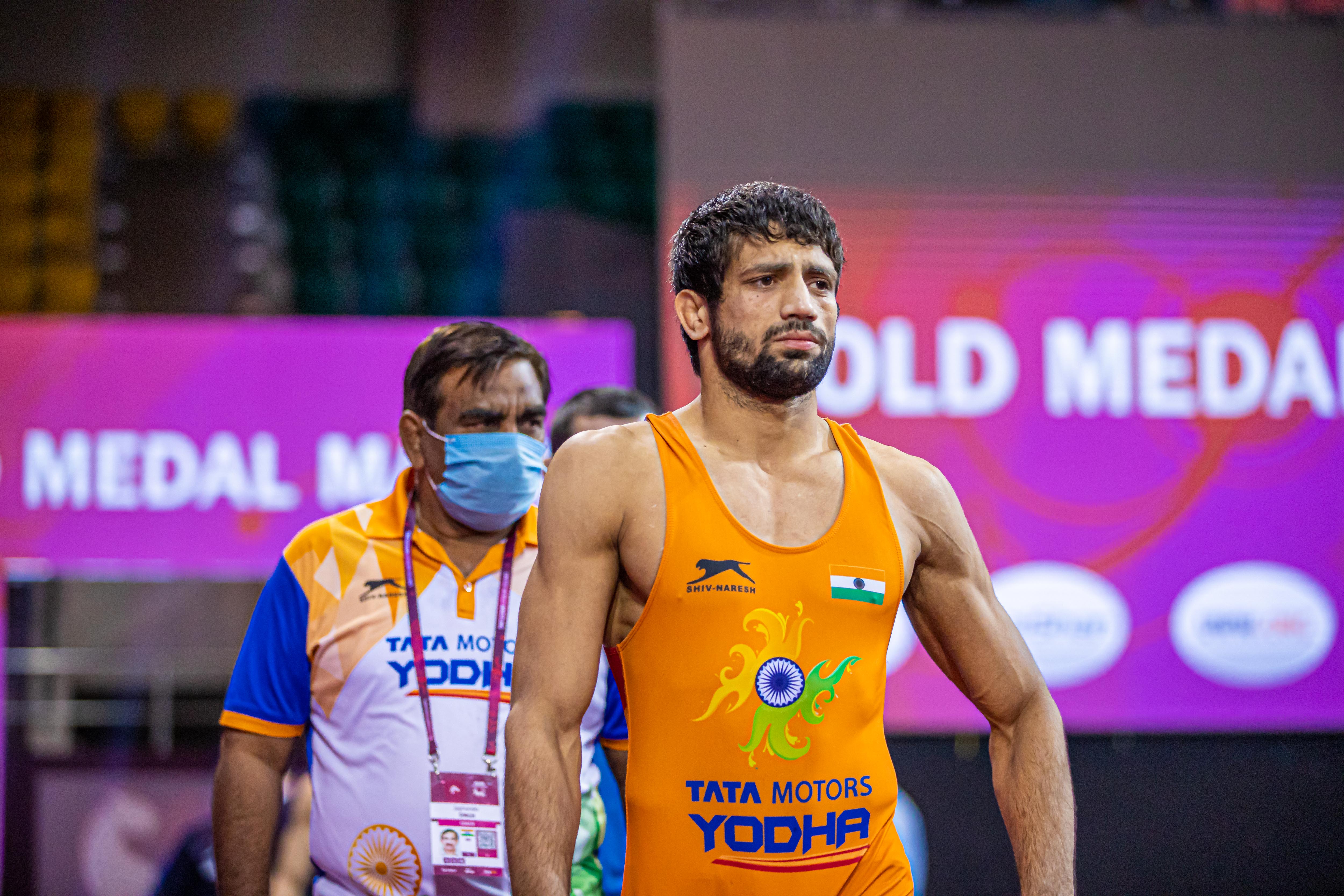 57kg
Thomas GILMAN (USA) consolidated his position at the top after winning his first Pan-Am title in May. He had taken the lead over Olympic champion Zavur UGUEV (RWF) by winning the '21 World gold. He has 92200 points.

But Uguev has now slipped to third after Ravi KUMAR (IND) won his third straight Asian title. Having competed at 61kg at the Yasar Dogu Ranking event, Kumar dropped down to 57kg for Asian Championships and collected 10000 points. He now has 51400 points while Uguev is at 51000 points.

At the European Championships Vladimir EGOROV (MKD) won the gold to break into the top-10 at ninth position.

Other movers in top-15 were Guesseppe REA VILLARROEL (ECU) at 13th and Oscar TIGREROS URBANO (COL) at 15th for his bronze finish at the Pan-Ams. 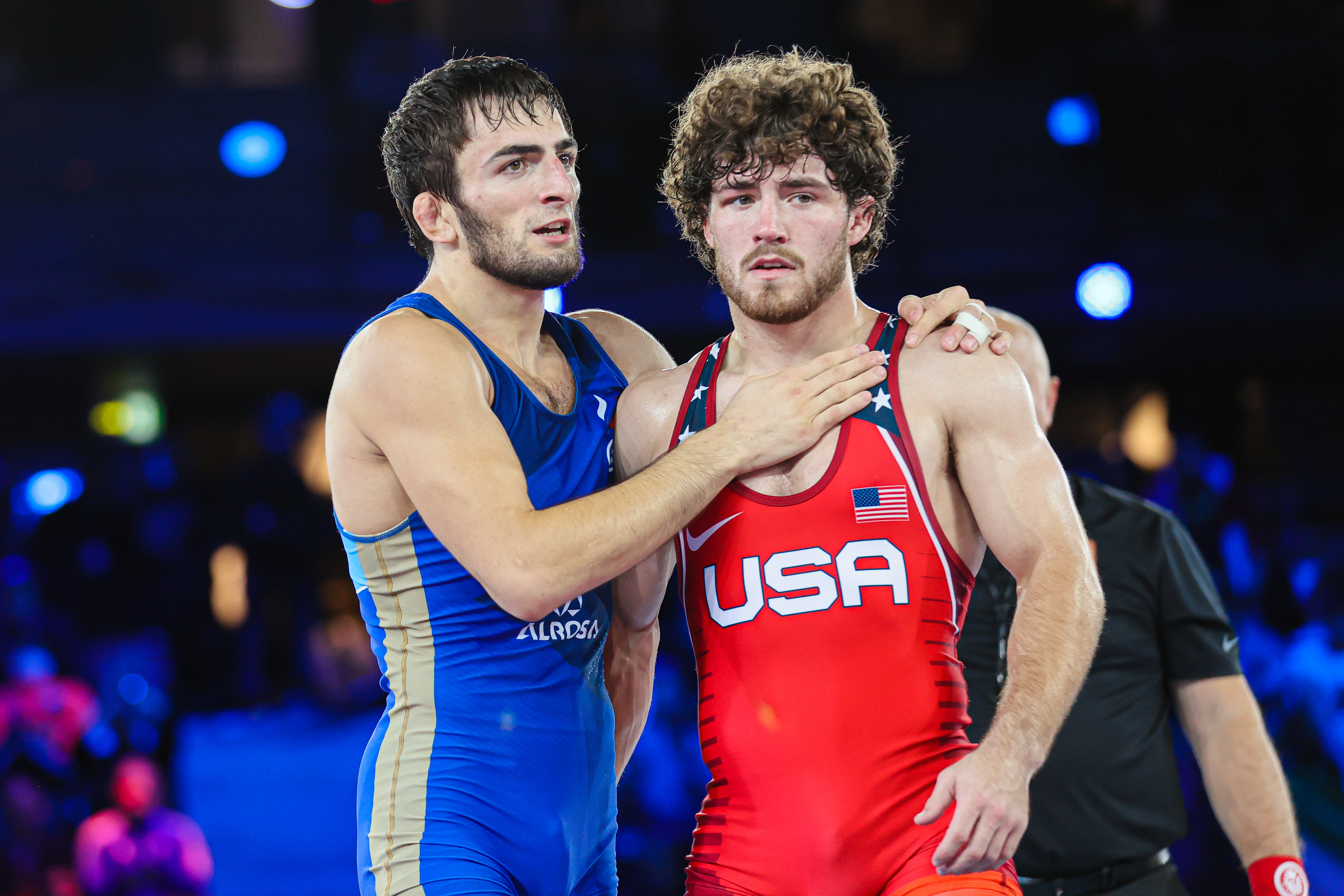 61kg
A close race is ensuing between Arsen HARUTYUNYAN (ARM) and Daton FIX (USA) as both won their respective continental titles. The former is second with 44000 points while Fix has jumped to third with 42000 points. World champion Abasgadzhi MAGOMEDOV (RWF) holds a slender lead at the top with 45000 points.

Tokyo Olympian Georgi VANGELOV (BUL) won bronze at Euros to climb to the fifth spot with 27700 points. Asian bronze medalist Ulukbek ZHOLDOSHBEKOV (KGZ) is close behind at sixth with 25100 points. 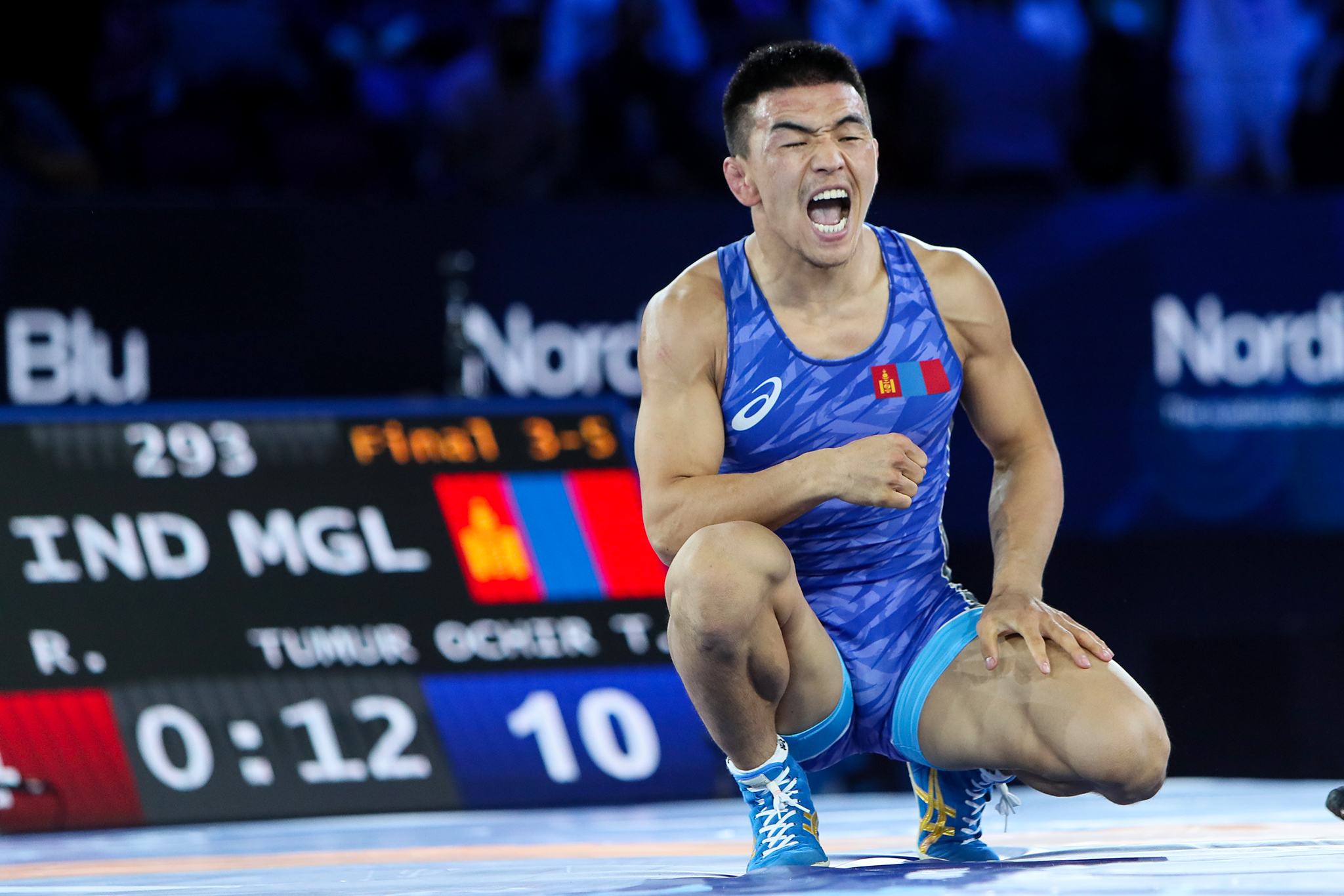 65kg
Haji ALIYEV (AZE) competed for the first time since winning the silver medal at the Olympics and won a silver at the European Championships. He moved past Olympic champ Takuto OTOGURO (JPN) and is back at number three with 52400 points.

But he could not overtake Tulga TUMUR OCHIR (MGL) who has 53500 points to sit second in the rankings led by world champion and Yasar Dogu silver Zagir SHAKHIEV (RWF).

Bajrang PUNIA (IND) remained at fifth despite a silver at Asian Championships but Iszmail MUSZUKAJEV (HUN) closed the gap with him with gold at European Championships. Punia has 42200 points while Muszukajev has 36000 points at seventh position.

Pan-Am champion Joseph MC KENNA (USA) moved to 13th but his opponent in the final Sebastian RIVERA remained a spot ahead of him at 12th. 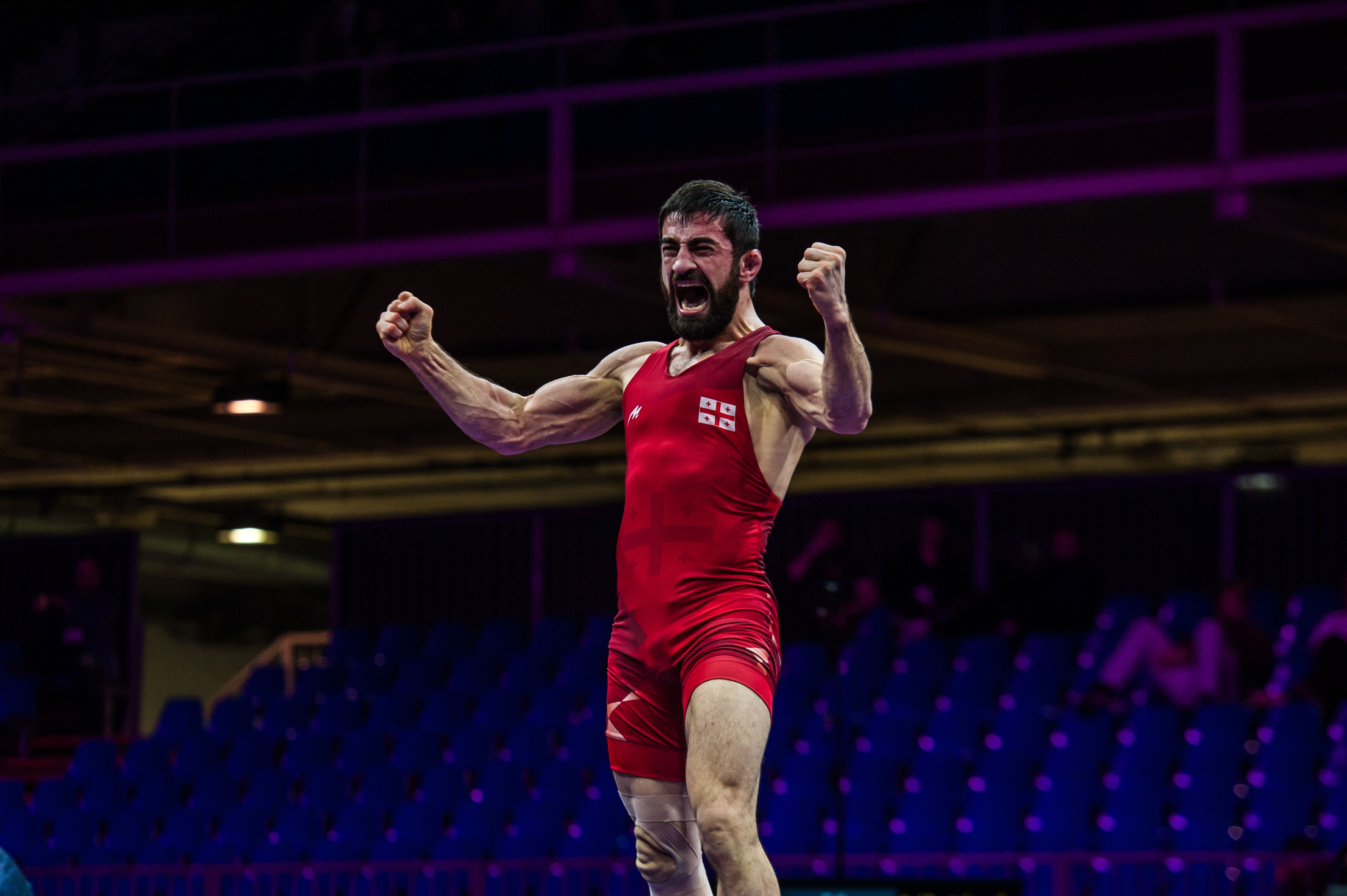 70kg
Ernazar AKMATALIEV (KGZ) had a chance to overtake topper Zurabi IAKOBISHVILI (GEO) with gold at Asian Championships but he finished with a silver and remained at second with 53520 points. Iakobishvili won the gold at European Championships to move to the top with 54200 points after winning the bronze Yasar Dogu Ranking Series event.

Arman ANDREASYAN (ARM) moved from eighth to fifth with silver at Euros and now has 36000 points.

Other big movers with European bronze Nicolai GRAHMEZ (MDA) as he broke into the top-10 at ninth and Asian bronze Syrbaz TALGAT (KAZ) moving to 12th.

Pan-Am champion Emmanuel OLAPADE (CAN) and African champion Bacar NDUM (GBS) are at 15th and 16th respectively with 10000 points each. Asian champion Taishi NARIKUNI (JPN) is at 17th with the same points. 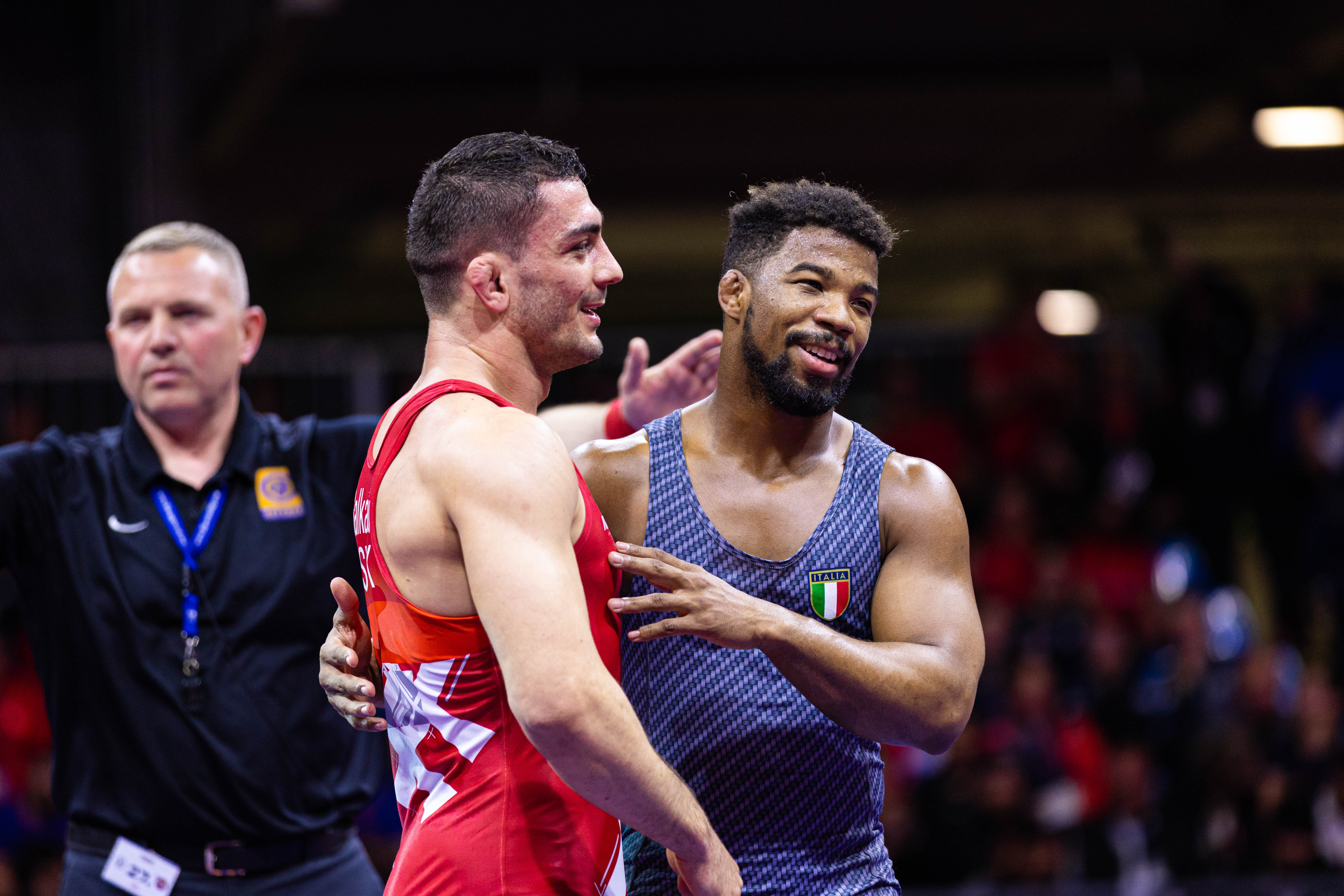 74kg
World champion Kyle DAKE (USA) moved further clear at the top with Pan-Am gold. He now sits at the top with 92200 points. Silver to him at Worlds Tajmuraz SALKAZANOV (SVK) won the European Championships to move past Olympic champion Zaurbek SIDAKOV (RWF) and is now second with 52000 points.

Frank CHAMIZO (ITA) returned to top-10 at sixth with his silver at the European Championships but is lagging behind with only 36000 points.

African champion Amr RAMADAN (EGY) jumped to the 10th spot by collecting 13000 points for his gold. He now has 29200 points and is ahead of Asian champion Yones EMAMICHOGHAEI (IRI) [27000 points] and European bronze medalist Turan BAYRAMOV (AZE) [26500 points]. 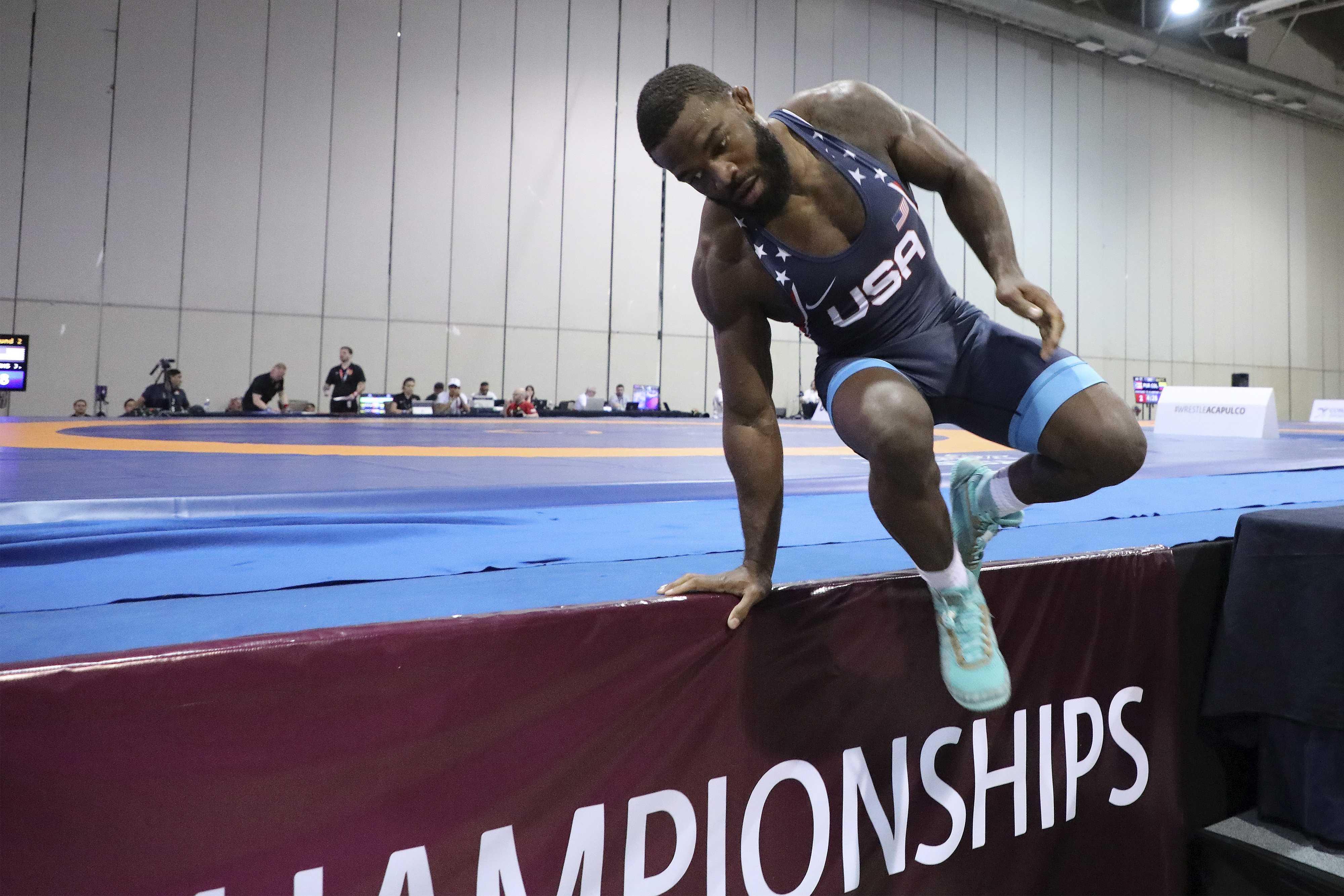 79kg
It will take some doing for any wrestler to catch Jordan BURROUGHS (USA) at 79kg as the five-time world champion has now moved to 63000 points after winning the Pan-Am title. The next best in world silver medalist Mohammad NOKHODILARIMI (IRI) who has only 37000 points.

Arman AVAGYAN (ARM) finished fifth at the European Championships to move to third with 33000 points while the champion in the tournament Georgios KOUGIOUMTSIDIS (GRE) is fourth with 31200 points.

Saifedine ALEKMA (FRA), the seventh placer at Euros, is currently eighth in the rankings with 21475 points while Asian champion Ali SAVADKOUHI (IRI) is a spot behind at ninth with 20200 points. European silver Ashraf ASHIROV (AZE) finishes off the top-10 with 19200 points.

Pan-Am silver Samuel BARMISH (CAN) is at the 11th spot with 18300 points followed by Euros bronze Vladimeri GAMKRELIDZE (GEO) [18020 points]. Arsalan BUDAZHAPOV (KGZ) broke into top-15 with a bronze at Asian Championships and has 16700 points. 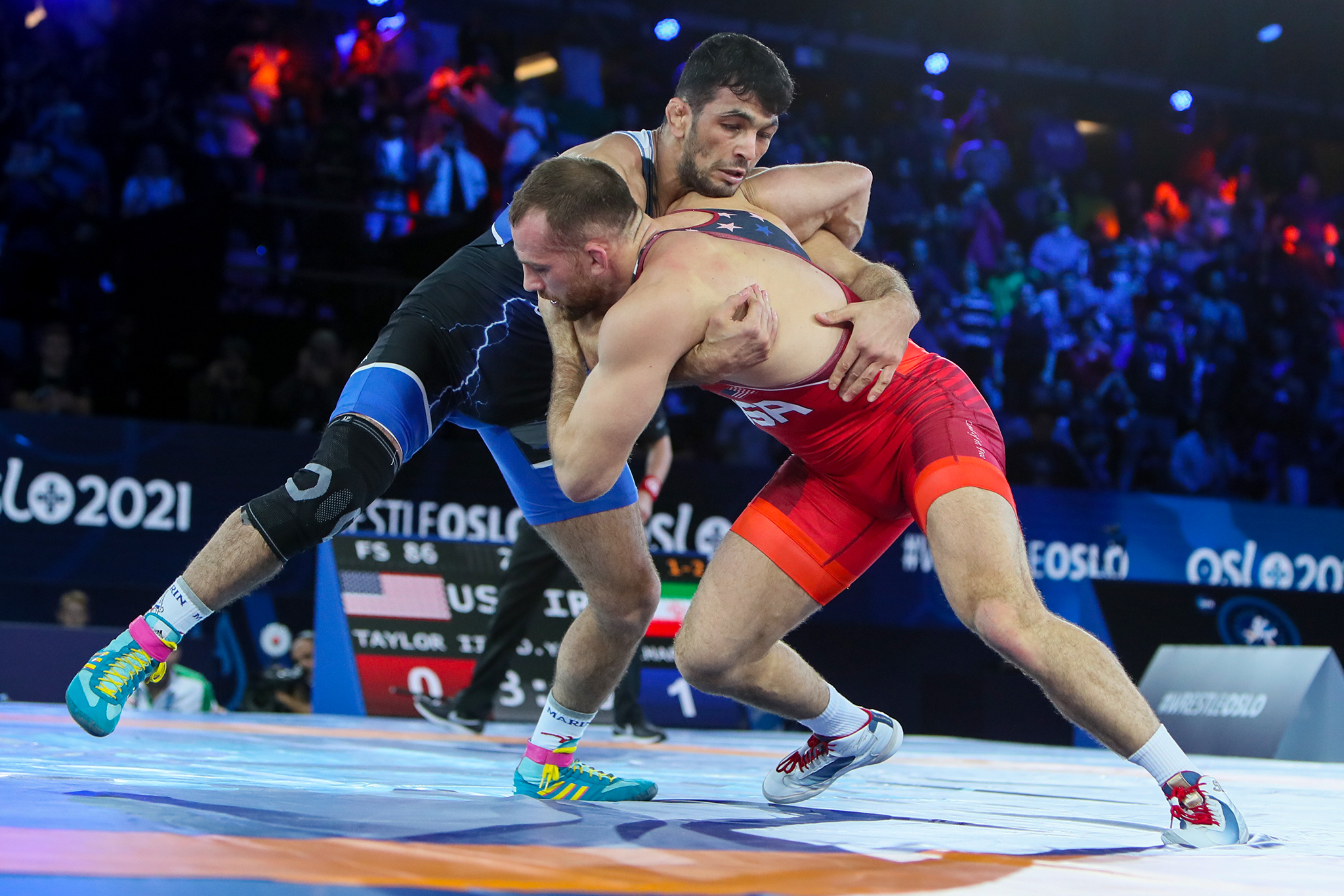 86kg
David TAYLOR (IRI) and Hassan YAZDANI (IRI) both decided to skip their respective continental championships but still remain one and two respectively.

But the two biggest movers were Olympic bronze Myles AMINE (SMR) who won the European title and now has 47200 points at the fourth position. Silver to him at the Euros and world bronze Abubakr ABAKAROV (AZE) is now fifth with 42000 points.

Boris MAKOEV (SVK) moved to sixth from 10th despite his ninth-place finish at the Europeans. He now has 36100 points, a mere 100 points more than Osman GOCEN (TUR) [36000 points] who won a bronze at the Euros.

10th at the European Championships Akhmed AIBUEV (FRA) has 30600 points to be placed at the 10th spot while Pan-Am bronze Ethan RAMOS (PUR) takes the 11th spot with 24700 points.

African champion Fateh BENFERDJALLAH (ALG), Taimuraz FRIEV (ESP) and the European fifth Uri KALASHNIKOV (ISR) all have 17000 points to be in 13th, 14th and 15th position. 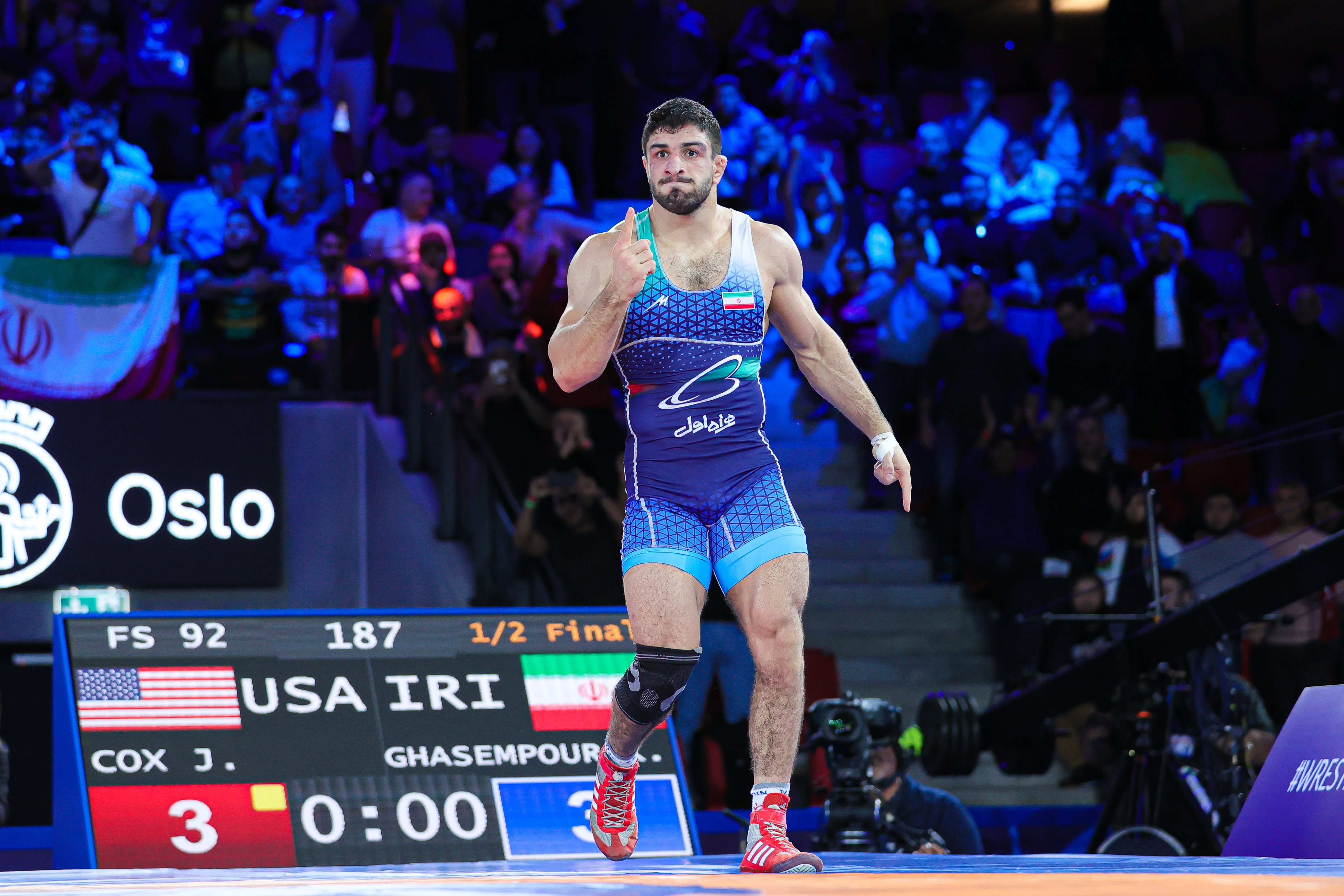 92kg
No wrestler has been able to move past world champion Kamran GHASEMPOUR (IRI) at 92kg despite him skipping the Asian Championships. He has 45000 points at the top.

The closest who came to take his spot was world bronze medalist Osman NURMAGOMEDOV (AZE) with 37500 points but he finished with bronze at European Championships. He only got 6500 points for that to be second. But he managed to move ahead of Magomed KURBANOV (RWF) [37000 points] with that performance.

Others have some work to do to catch up with the top four wrestlers. Pan-Am silver medalist Jeremy POIRIER (CAN) is seventh with 21000 points but the eighth, ninth and 10th spots are taken by wrestlers with 18200 points, Erhan YAYLACI 16000 points and Akhmed MAGAMAEV 15500 points and none of them competed at their continental championships.

At 11th, Orgilokh DAGVADORJ (MGL) has 15400 points for his silver medal at the Asian Championships while fifth place at the same tournament Takuma OTSU (JPN) has 14000 points and is at 13th spot. 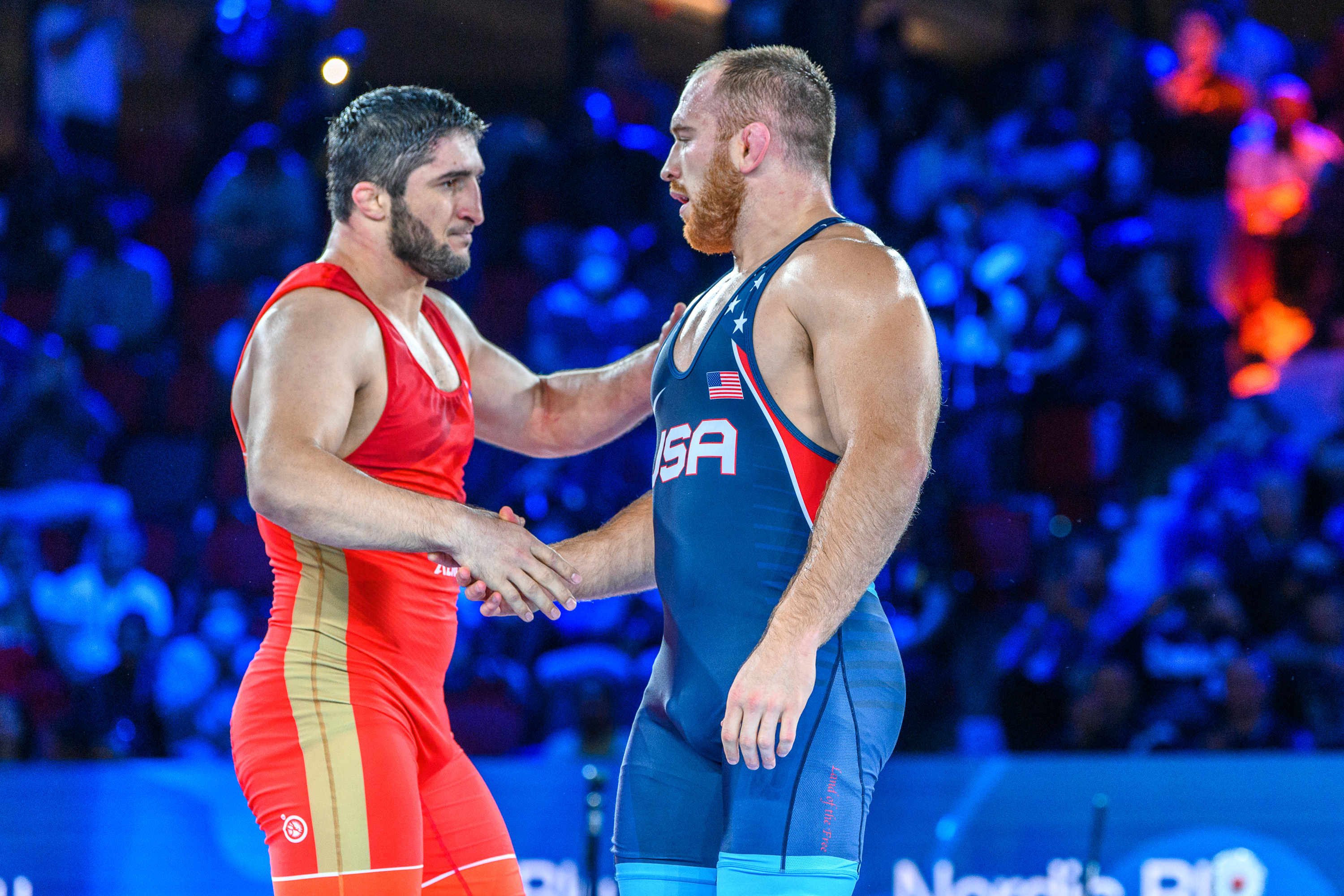 Abdulrashid SADULAEV (RWF) and Kyle SNYDER (USA) are clear of the rest of the field as top two at 97kg. (Photo: UWW / Tony Rotundo)

97kg
Kyle SNYDER (USA) won the Pan-Am Championships but could not move ahead of Olympic and world champion Abdulrashid SADULAEV (RWF). Snyder has 88400 points while Sadulaev has 96000 points.

The rankings are much closer if the top two are removed. World bronze medalist Suleyman KARADENIZ (TUR) remains at third with 38500 points while European seventh Magomedgadji NUROV (MKD) has 36100 points at sixth position.

Batzul ULZIISAIKHAN (MGL) won a silver medal at the Asian Championships to total 36100 points and is now at the seventh position. World bronze medalist Mojtaba GOLEIJ (IRI) is the only other wrestler to remain in the top-10 as he has 31000 points.

Three wrestlers bronze into top-15 as Mohammadhossein MOHAMMADIAN (IRI) won the Asian title and improved to 12th position with 26400 points.

Radu LEFTER (MDA) survived to move out of the top-15, thanks to the 3100 points he got at the European Championships. He now has 20100 points at the 14th position. Asian bronze medalist Satywart KADIAN (IND) also has 20100 points and is ranked 15th. 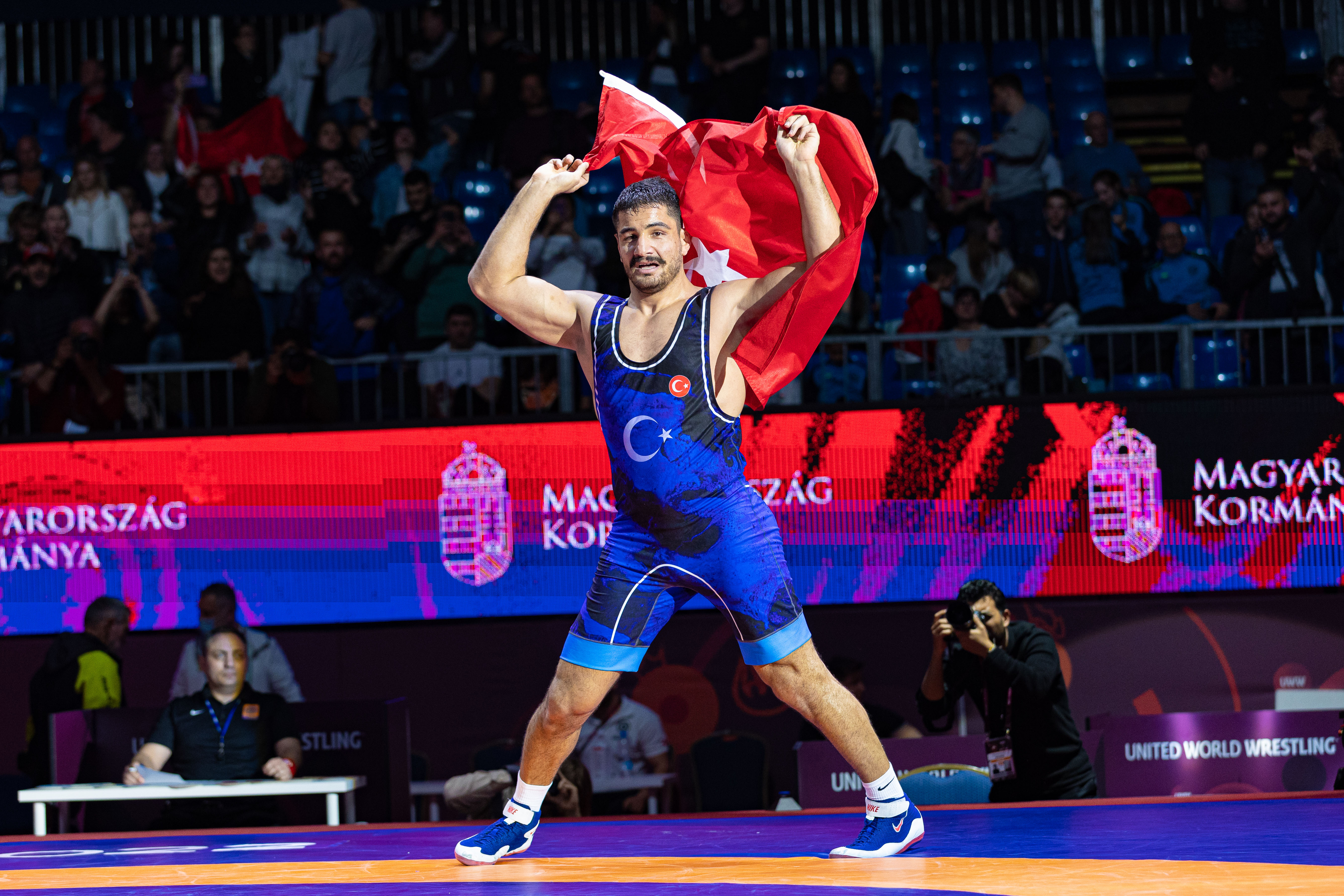 125kg
Taha AKGUL (TUR) and Geno PETRIASHVILI (GEO) once again met in the 125kg European Championships final. It was also a battle for the top spot in rankings and in both, Akgul came out on top. Akgul won the gold and now has 88200 points at the top while Petriashvili has 86400 points.

But Nicholas GWIAZDOWSKI (USA) moved to the sixth spot despite losing the final at Pan-Am Championships. His silver took his tally to 38800 points.

No other substantial change was seen in the rankings apart from Pan-Am champ Amarveer DHESI (CAN) breaking into the top-10. He is now 10th with 22800 points.

African champion Youssif HEMIDA (EGY) also moved up and is now at the 11th spot with 22000 points followed by European bronze medalist Robert BARAN (POL) at 12th with 20800 points.

Daniel LIGETI (HUN) also won a bronze at the European Championships which helped him move from 22nd to 14th. He now has 16700 points.