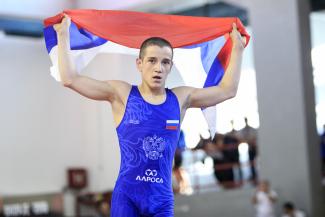 SKOPJE, Macedonia (May 16) - Azerbaijan and Russia were poised to meet each other in three of the five final bouts to close out freestyle wrestling at the 2018 Cadet European Championships. Russia finished the third day of competition with three gold medals, including two over Azerbaijani opponents.

Turan BAYRAMOV (AZE) shutout Magomed ABDULKADYROV (RUS), 9-0 in the 65kg finals, which was the first meeting between Azerbaijan and Russia.

In the second period, Bayramov threw the Russian wrestler for four points and earned the top spot with a 9-0 shutout.

At 80kg, Akhmedkhan TEMBOTOV (RUS) evened the score at one win apiece after controlling Fuad MAYILOV (AZE), 6-0 in the one-sided finals match-up.

The third and final Azerbaijan and Russia matchup came at 110kg where Sergei KOZYREV (RUS) gave Russia the 2-1 advantage with a 10-0 technical superiority victory over Islam ABUEV (AZE).

Tembotov scored two takedowns and a gut wrench, taking the 6-0 lead into the final period. He picked up another takedown to a gut with 25 seconds left in the match and scored the 10-0 technical superiority victory.

Though he did not have an Azerbaijani opponent, Russia's Daniel ZOPUNIAN (RUS) matched his medal with his shoes, giving Russia their third championship of the night with a win over Halil GOKDENIZ (TUR) in the 48kg finals.

Zopunian scored four points on two outside elbow control duck unders, heading into the closing minute with a 4-0 lead.

The Turkish wrestler stole the 4-4 lead on criteria with an arm drag to a gut wrench in the final 30 seconds, but Zopunian closed out the match with a pushout with 17 seconds left to take the 5-4 win.

The Ukrainian wrestler added six points to his 1-0 lead with three takedowns in the closing period, wrapping up the first place match, 7-0.