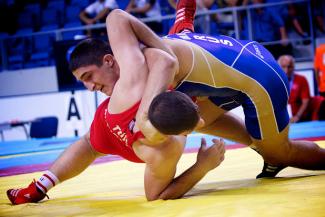 Abdulrashid “The Russian Tank” Sadulaev throws Muhammed Enes Altun of Turkey to his back during the finals of the Cadet World Championships Saturday afternoon in Zrenjanin, Serbia. Photo: T.R. Foley, FILA News

ZRENJANIN, SERBIA (Aug. 24)-- Abdulrashid “The Russian Tank” Sadulaev lived up to his ominous and crushing nickname Saturday Night at the Cadet World Championships in Zrenjanin.

The 17-year-old Russian went 5-0 on the day, never ceding a point for his day on the mat. The 2012 World Champion at 76kg, Sadulaev met European silver medalist Muhammed Enes Altun of Turkey in the finals, securing the fall and his second consecutive world title in just 46 seconds. He was never challenged.

Russia’s other gold medal performance came at 50kg where Afbulagav Shakhbanov used his two-on-one setup to secure two takedowns on the way to a workman-like 7-3 win over European bronze medalist Mahir Amiraslanov of Azerbaijan.

Japan’s Ryo Matsui utilized the tournament’s best leg lace to defeat his semifinal and finals opponent by technical fall at 42kg. The diminutive wrestler changed levels on his feet to open up various leg attacks. Once on top he locked up opponent’s ankles and spun repeatedly for one-point exposures. He beat Iran’ Younes Emamchoghaei in the finals, 8-1.

Viktor Terzi of Ukraine and Jatin of India picked up the bronze medals at 42kg.

Turkey’s Selim Kozan impressed against longtime rival Ramaz Zoidze of Georgia earning a first period technical fall in the finals at 58kg.  Kozan launched an exciting three-point toss seconds after the opening whistle.  Their finals match was a rematch of a second-round qualification match at the European Championships won by Kozan, 6-3.

In the semifinals Kozan upended Mahammadali Aliyev of Azerbijian 4-2, only weeks after Aliyev beat him 5-2 in the finals of the European Championships.

Aliyev and Uruzbeg Tcomartov of Russia would go on to win the bronze.

The night’s most competitive and compelling match belonged to Kamran Ghasempour of Iran and Abdulmuslim Mukhuddinov of Azerbaijan. The continental champions opened with a flurry of action, much of which benefitted the agile and aggressive Ghasempour. The Iranian held his 3-2 lead late in the second period, but with only seconds remaining Mukhuddinov used a whizzer to bump Ghasempour hips and whip him to his back where the Azerbaijani would quickly earn the fall.

Latvia’s Alberts Juvcenko won his country’s first medal of the competition, pinning India’s Pritam in 2:37. Tariel Gaphrindashvili of Georgia earned the other bronze.

freestyle competition where a dozen countries won medals. The Americans, who finished eighth a year ago, failed to advance any wrestlers into the medal round.