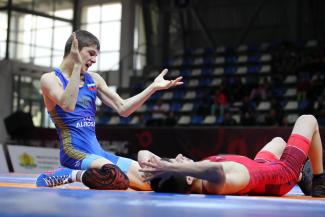 SAMOKOV, Bulgaria (June 16) --- Russia reeled in four additional freestyle gold medals and walked away with the cadet European team title -- 75 points ahead of second-place Armenia. In total, Russia won six golds, two silvers, and a bronze medal and only missed medaling in one weight class.

Galaev was the first Russian crowned champion on the third day of wrestling in Bulgaria. He picked up a fall over Hayko GASPARYAN (ARM) and won gold at 45kg.

Ramzan Israpilov’s hand was raised in the 51kg finals after Javid JAVADOV (AZE) injury defaulted out of the match. It was his second career continental title. He also won the ’19 U15 European title at 38kg.

Adam Arkhiev claimed a second European title with a one-point (4-3) win over Abdulrahman IBRAHIMOV (AZE) in the 60kg finals.

Kantemir Suanov closed out the day with Russia’s fourth gold. He beat Sali Yusrefov SALIEV (BUL), 3-1, in the 92kg finals.

Wrestling resumes tomorrow at 11:30 (local time) and can be followed on www.uww.org. 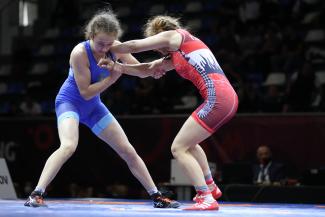 SAMOKOV, Bulgaria (June 18) --- Russia came into the final day of women’s wrestling at the Cadet European Championships with a four-point lead over Ukraine. After winning four of five medal matches on Friday night, they claimed the team title with 179 points. In the end, Russia finished 24 points ahead of Ukraine and picked up medals in nine weight classes – including a trio of titles.

Natalia KHRAMENKOVA (RUS) won Russia’s lone gold of the day, but they also earned three bronzes and a silver.

Ukraine and Belarus closed out the competition with a pair of Day Five champions and finished with 155 points. But when it was all said and done, Ukraine held criteria after winning three golds compared to Belarus’ pair of champions.

Ukraine’s pair of champions were Anastasiia POLSKA (40kg) and Iryna BONDAR (61kg). Polska pinned Alexandra VOICULESCU (ROU) and won her third European gold medal. She also won U15 European gold in ’19 and ’21. Ukrainian’s second Friday champion Bondar also scored a fall in the gold-medal match. She stuck Kseniya TSIARENIA (BLR) and improved on her runner-up finish from the ’19 U15 European Championships.