Review 2021: UWW Returns with Near Full Calendar; Worlds and Olympics in Same Year 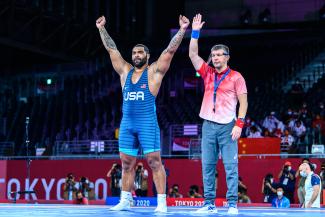 CORSIER-SUR-VEVEY, Switzerland (December 28) -- In 2020, United World Wrestling battled one postponement after the other as the world battled with the COVID-19 pandemic. All continental and World Olympic qualifiers barring one were canceled and none of the age-group championships could be held.

But as the world entered the new year, UWW made progress to host events according to the COVID-19 guidelines laid out by the International Olympic Committee and World Health Organisation.

While the spotlight was on the Tokyo Olympics in 2021, UWW managed to host an almost full calendar in 2021 including the senior World Championships, a rare event as the Games and Worlds were held in the same year for the first time.

Soon after the Tokyo Olympics in August, UWW President Nenad LALOVIC met with the officials of the Norwegian Wrestling Federation to take a final decision on whether to host the Oslo World Championships or not in October.

In an unprecedented decision, the two agreed to host the tournament, presenting the wrestlers an opportunity to win medals at two of the most prestigious wrestling events.

Wrestling was a huge success at the Olympics as Mijian LOPEZ (CUB) became the first male wrestler to win four Olympic gold medals when he won the 130kg gold in Greco-Roman. Japan continued its dominance in women's wrestling with four gold medals while the USA claimed five medals in the freestyle competition.

The Games saw a total of 26 countries win at least one medal, with Nigeria and San Marino winning their first-ever in Olympic wrestling. Apart from that, Germany, Turkey and Kyrgyzstan won their first-ever medals in women's wrestling.

In Greco-Roman, Cuba claimed two gold medals at 60kg and 130kg while Mohammadreza GERAEI (IRI) stunned everyone to win the gold at 67kg. Zhan BELENUIK (UKR) upgraded his Rio silver to gold in Tokyo while Musa EVLOEV (ROC) upset Artur ALEKSANYAN (ARM) in the 97kg final.

Once the wrestlers returned from the Land of the Rising Sun, they went to the Land of the Midnight Sun only two months later in Oslo, Norway to perform at the World Championships in front of the local fans. Once again, some epic bouts were witnessed with Sadulaev and Snyder adding another chapter in their rivalry. A similar story followed when Yazdani spiced up his rivalry with Taylor by winning the gold medal in Oslo and avenging the loss in the Olympic finals.

Despite sending a second-string team, Japan still won the women's wrestling team title with teen-sensation Akari FUJINAMI (JPN) leading the charge, winning the gold at 53kg without giving up a point in four bouts. The USA was the second-best team with Gray winning a record sixth world title.

In Greco-Roman, Iran and the Russia Wrestling Federation ran through the field with the most medals but the latter came out on top in the team title race with six more points than Iran.

Sadulaev and Geraei also became the first-ever wrestlers to win an Olympic and World Championships gold in the same year at 97kg and 67kg weight classes respectively.

The highs in the wrestling world were not predicted at the start of the year when the sport was trying to host tournaments early in 2021.

UWW's calendar began with the Matteo Pellicone ranking series event in Rome, Italy in March and that was followed by the all-important European Olympic Qualifiers in Budapest, Hungary in the same month.

With just one month remaining, the action shifted to Sofia, Bulgaria where UWW in May successfully hosted the World Olympic Qualifiers, the last chance for wrestlers to earn a ticket to Tokyo. Wrestlers also got a chance to add some ranking points for the seeds of the Olympics at the Poland Open ranking series event which was held in Warsaw in June.

Wrestlers returned to Budapest, Hungary for the U17 World Championships, the first at any level since the U23 Worlds in October 2019 which was also held in the same city. USA women claimed a historic team title while Russia was once again dominant in freestyle and Greco.

A week after the Tokyo Olympics, Ufa, Russia saw the U20 World Championships which were last held in 2019 and 15 days later, Oslo was ready for the senior World Championships. USA women again won the team title, confirming their quick improvements at the grassroots level.

On October 31, UWW held its Congress in Belgrade, Serbia, the first since 2018 one in Budapest, Hungary. A day later, the Serbian capital saw the start of the U23 World Championships as the number of competitions held in 2021 reached 22 including the Olympics.

Ukraine women's team claimed the title for the first time while Iran and Russia were involved in a thrilling team title race in freestyle and Greco-Roman.

The year also saw a few stars retire from the game including the Lorincz brothers -- Viktor and Tamas -- from Hungary. Both of them won medals at the Tokyo Olympics. Germany's biggest stars Focken and Greco-Roman great Frank STABLER (GER) also ended their careers with medals in Tokyo.

While countries like China and Japan limited their participation in some tournaments, other countries managed to send full squads for continental and World Championships including at the U17, U20 and U23 levels.

Going into 2022, UWW will continue the efforts to return to normal hosting of events as the wrestlers prepare for yet another Olympic cycle.