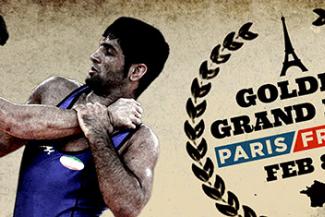 This weekend, stars from the international wrestling will shine bright in the City of Lights.

Wrestlers from four continents descend on the French capital for the Grand Prix of Paris, the second installment in FILA’s Golden Grand Prix series. While countries from all corners of the globe send delegations to this event, the French team offers the most compelling story.

Not long ago, the French would have done little more than play the role of gracious host at this tournament. They would have produced a great location and excellent hospitality, but mustered little in terms of competition on the mat.

Things have changed, and now France claims the best Greco-Roman wrestling program in Western Europe. French wrestlers should earn medals in this tournament at a variety of weight classes, particularly at 71 kg, where France’s greatest wrestler of all time, Steeve Guenot, returns to competition.

This weekend, a strong French squad well test its meddle alongside scores of world-class competitors in one of the world’s great cities.

Below, this preview provides a schedule and a description of top contenders at each weight.

Samat Nadyrbek Uulu (KGZ) finished 2013 with a hot hand, where he placed first at the 2013 NYAC and second at the World University Games. The Kyrg wrestler looks like a good bet for gold, but will face tough competition in Mehmed Feraim (BUL) a 2013 Junior World bronze medalist, and Sam Hazewinkel (USA), a 2012 Olympian.

This weight features a pair of the very best in the world in No. 2 Vladimir Dubov (BUL) the reigning World silver medalist, and top American Reece Humphrey, ranked No. 8 in the world.

Ulukman Mamatov (KGZ) is a favorite at this weight after winning a bronze medal in the 2013 Asian Championships.  Jason Chamberlain (USA) also contends for gold. The American placed third in last weekend’s Dave Schultz International.

Wrestlers seem reticent to announce their intention to participate in this new weight class. This weekend’s Grand Prix offers a chance for wrestlers to step up and announce their presence at 70 kg

Multiple time European Championship medalist Leonid Bazan (BUL) looks to stand on the podium at yet another prestigious international tournament. Bazan should not look past the Nick Marable (USA). Marable does not get to wrestle in World Championships as he wrestles behind a golden generation of American 74 kg wrestlers, but he offers a tough match for almost anyone.

This weight includes a number of wrestlers knocking on the door of big things on the international level. Gocha Lomtatidze (GEO) is a past Junior World bronze medalist but has yet to earn a signature win on the Senior level. Meanwhile, Zbigbiew Baranowski has come maddeningly close to medals at a number of important tournaments. Joining these two at 86 kg is Keith Gavin, who has risen to the top rank at this weight in the United States, but has yet to achieve success on European soil.

Poland’s best freestyle wrestler, Kamil Skaskiewicz (POL) placed seventh in the world and second in Europe last year, and claims the world No. 10 ranking. The poles toughest potential match comes from American Wynn Michalak(USA). Michalak has had big wins in the past, including one over Olympic champ Jake Varner. While Michalak struggles with consistency, when he is on, he can beat anyone.

Emilia Budeanu (MDA), the 2013 Junior World champ, presents a good shot at a medal for Moldova.

Two decorated veterans vie for gold at this weight. Both Francesca Mori (ITA) and Katherine Fulp-Allen (USA)  have won medals at multiple international tournaments. They should add to their tally this weekend.

American Kelsey Campbell (USA) is the favorite at this weight. Campbell represented her country at the 2012 Olympics and has placed top five in the World Championships.

The biggest match of the entire tournament could occur at this weight. World No. 1 Marianna Sastin, the defending World champion, heads into this grand prix on top of game. However, the Hungarian superstar must go through Olympic bronze medalist Yulia Ratkevich (AZE). Ratkevich placed third in the World Championships and currently maintains the No. 3 ranking in the world.

Svetlana Saenko (MDA), the No. 6 wrestler in the world is the most accomplished wrestler at this weight. The Moldovan will have to get past Dalma Caneva (ITA), the reigning Junior World bronze medalist, and Julia Salata (USA) the 2013 Pan American bronze medalist.

Aline Ferreira (BRA), the 2012 South American champ, could claim her continent’s only medal at this weight. The Brazilian will have to overcome a field that includes Zsanett Nemeth (HUN), a 2011 world cadet champion.

Edward Barsegjan (POL) comes into this tournament as the heavy favorite after a 2013 where he placed fifth in the world and won the World Combat Games. The Pole’s path to gold may cross Allen Thian-Lemaire (FRA), a young French wrestler with promising international results.

Revaz Lashkhi (GEO) won silver at the London Games and should win gold at this Grand Prix. The Georgian is joined in this weight by another proven wrestler in Tarik Belmadani (FRA). Belmadani has placed in the top ten of the last two world-level championships.

The big story at this weight is the presence of 2008 Olympic champion and 2012 Olympic bronze medalist Steeve Guenot (FRA). The wrestling pride of France will look to put on a show before his home country fans.

Another formidable Georgian, Zurabi Datunashvili (GEO), a European runner up, own this division most decorated resume. Piotr Przepiorka (POL) can push Datunashvili. The Pole won the elite Cerro Pelado in Cuba last year.

France has yet another shot at a championship with Alain Hassli (FRA), a World Cup individual gold medalist. Tadeusz Michalik (POL) an accomplished international veteran, is also a favorite at this weight.

85 kg (Saturday)
Vladimir Gegeshidze (GEO), fifth in the London Games, should win what will be one of many medals for a strong Georgian team.

Amer Hrustanovic (AUT), the tenth place finisher at the 2012 Olympics, also has a great chance to earn a medal.

Daniel Gastl (AUT) a 2013 Junior World runner up, is Austria’s best shot at a gold medal. Vasil Imerlishvili (GEO) adds additional quality to this weight, and could upend the young Austrian.

Greco-Roman’s big men face a wide open weight class. Hirotake Tsuda (JAP), a Junior Asian bronze medalist, is definitely one wrestler at this weight to keep an eye on.

Mathieu Lorentz (FRA) has had promising results in international competition so far in his young career. Perhaps he can add to France’s medal tally.