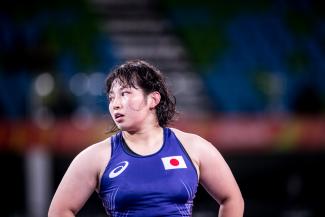 1:42: Sara DOSHO (JPN) gave Japan its third Olympic finalist on Wednesday by earning a 7-2 come-from-behind victory over Anna Jenny FRANSSON (SWE). Fransson led 2-0 in the final minute before Dosh scored a takedown to grab the lead on criteria. She then built on her lead with a four-point throw in the final 10 seconds. Tonight she will face Vorobieva for the gold medal.

1:36: Natalia VOROBIEVA (RUS) will wrestle for her second Olympic gold medal tonight after picking up a first-period fall over Enas Mostafa Youssef AHMED (EGY) in the semifinals at 69kg.

1:24: Kaori ICHO (JPN), a three-time Olympic champion, was dominant in the semifinals, beating past world champion Yuliya RATKEVICH (AZE) 10-0 at 58kg. If she wins gold tonight, she will become the first wrestler to win four Olympic gold medals.

1:17: Three-time world champion Eri TOSAKA (JPN) secured an 8-3 victory over SUN Yanan (CHN) to reach the finals at 48kg against Stadnik. Sun jumped out to a 2-0 lead. Tosaka would come back with a takedown and three straight turns off a leg lace to take a commanding leading.

1:12: World No.1 Mariya STADNIK (AZE) earned a first-period fall over Elitsa Atanasova YANKOVA (BUL) to reach the gold-medal match at 48kg. Stadnik scored early and often and built a 6-0 lead before earning the fall over the Bulgarian.

1:07: Jenny FRANSSON (SWE) was impressive in beating world No.2 Aline FOCKEN (GER) 9-1 to advance to the semifinals at 69kg.

12:55: Enas Mostafa Youssef AHMED (EGY) picked up a late fall over Gilda Maria DE OLIVEIRA (BRA) to move onto the semifinals at 69kg. The Brazilian led 1-1 on criteria late in the match before Ahmed scored a takedown to grab the lead and was able to secure the fall in the process

12:54: Olympic champion Natalia VOROBEVA (RUS) came back to defeat Nasanburmaa OCHIRBAT (MGL) 4-2 in the quarterfinals at 69kg. The Mongolian went up 2-1 in the second after a takedown, but the Russian battled back to take the match.

12:46: World No.6 Aisuluu TYNYBEKOVA (KGZ), a past junior world bronze medalist, picked up a big win over world silver medalist Petra Maarit OLLI (FIN) 14-7 at 58kg. Olli has been ranked No.1 in the world at 60kg.

12:34: Yuliya RATKEVICH (AZE), a past world champion, punched her ticket to the semifinals with a 7-3 victory over two-time Olympic bronze medalist Jackeline RENTERIA CASTILLO (COL).

12:31: Three-time Olympic champion Kaori ICHO (JPN) topped two-time world bronze medalist Elif Jale YESILIRMAK (TUR) 3-1 in the quarterfinals at 58kg. Icho scored a takedown in the closing seconds of the opening period, which proved to be the difference in the match.

12:16: World No.1 Mariya STADNIK (AZE) continued her dominance, beating past world silver medalist Iwona MATKOWSKA (POL) 10-0 in the quarterfinals at 48kg. She ended the match with a powerful double leg, feet to back.

12:08: Three-time world champion Eri TOSAKA (JPN) was pushed early against Haley AUGELLO (USA) at 48kg in the quarterfinals, but turned it up in the second period and rolled to an 11-2 victory. Tosaka led 1-0 after the first period. Augello came back in the second period with a takedown to lead 2-1. But Tosaka quickly turned the tables and dominated the rest of the way to win by nine.

11:59: World No.2 Valeria KOBLOVA ZHOLOBOVA (RUS) had no trouble with Orkhon PUREVDORJ (MGL) in the round of 16, winning 11-0. The Mongolian defeated Kaori Icho earlier this year. Now onto the quarterfinals ...

11:40: Aisuluu TYNYBEKOVA (KGZ), who became the first woman to wrestle in the Olympics for Kyrgyzstan, topped local favorite Joice SOUZA DA SILVA (BRA) 11-8 in a wild, back-and-forth match at 58kg. Tynybekova scored four points in the final 30 seconds off a takedown and exposure to go up by four. Souza Da Silva would score a late two, but ultimately come up short.

10:58: It took two-time Olympic medalist Mariya STADNIK (AZE) just 48 seconds to earn a 10-0 technical fall over Patricia Alejandra BERMUDEZ (ARG) at 48kg. With the win she advances to the quarterfinals.

10:50: Gilda Maria DE OLIVEIRA (BRA) brought the Brazilian fans to their feet after notching a 6-2 victory over Ilana KRATYSH (ISR) at 69kg. Kratysh had a late throw, but it was too little too late and the Brazilian held on for the victory.