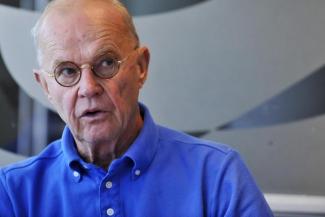 It is with great sadness that the International Olympic Committee (IOC) has learnt of the death of Peter Tallberg, IOC member in Finland, at the age of 77.

A five-time Olympic sailor, Peter Tallberg was the second-longest serving current IOC member, having been elected in 1976. Only Doyen Vitaly Smirnov, who was elected in 1971, has served longer.

IOC President Thomas Bach immediately reacted to the death of Peter Tallberg: 'As the founding chairman of the Athletes’ Commission, Peter was my first teacher at the IOC,’ he said. ‘He worked all his life for sport and for protecting the clean athletes. The athletes of the world and all those who love sport owe him a huge debt and he has left a lasting legacy for the Olympic Movement for which we can all be grateful. As a mark of respect and to remember such a great man the Olympic flag will be flown at half-mast for three days at the IOC headquarters in Lausanne’ Bach added.

During his 40-plus years working for the Olympic Movement, Mr Tallberg had a strong and far-reaching impact. He chaired the Athletes’ Commission from its inception in 1981 until 2002, when he became an Honorary member of the commission. He was also a member of the following commissions:

He captained the Finnish Olympic Yachting team (1976), was Vice-President of the Finnish Squash Association (1974-1976), became a Council member and Secretary General of the General Association of International Sports Federations (GAISF, later SportAccord) (1988-1998), and was a member of the Executive Board of the European Sport Conference (1994-1998).

Mr Tallberg worked tirelessly to place the athletes at the heart of the Olympic Movement and to protect sport from all forms of corruption. He was a Council Member of the World Anti-Doping Agency (WADA) (1999-2002) and member of the World Olympians Association (WOA) (2007-2014) as liaison for the IOC Athletes’ Commission.

Before transitioning into the administrative side of sport, Tallberg was a decorated sailor who competed in five editions of the Olympic Games. His best performance at the Games was a fourth-place finish in Star at Tokyo 1964. He finished 15th in the 5.5m in Rome 1960, 11th in Star at Mexico City 1968, 12th in Soling at Munich 1972, and 11th in Star at Moscow 1980.

He also enjoyed practising other sports, including squash, table tennis, skiing and golf. As a skier, Tallberg was Finnish junior slalom champion in 1954. He finished 3rd in the Finnish senior squash championships in 1978.

The IOC expresses its deepest sympathies to Peter Tallberg’s family.