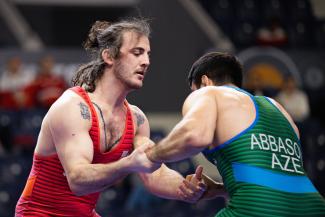 BUDAPEST, Hungary (April 1) -- The European Championships move into the fifth day with some Greco-Roman. Five weight classes will see wrestlers take the mat.

14:20: Final bout of the morning session coming up as Per OLOFSSON (SWE) takes on Ciro RUSSO (ITA) in the 77kg quarterfinal. Olofsson with a huge four and he is looking for the pin. Russo tries hard but pin is confirmed.

14:10: Islam ABBASOV (AZE) has beaten Zurabi DATUNASHVILI (SRB) once again. A total mental block from the Serbian world champ in the final minute as Abbasov manages to defend his lead and win 5-3

14:03: Abbasov scores from par terre but Datunashvili gets the throw as well. It's 5-3 with Datunashvili's lead. Challenge from Abbasov. The first two from Abbasov using a head pinch are confirmed. And it's a leg foul from Datunashvili. 5-1 for Abbasov.

14:02: Datunashvili is leading 1-1 against Abbasov with 1:40 remaining in the bout. He is called passive for the second time and Abbasov now has the chance to score for the win

14:00: World champ Malkhas AMOYAN (ARM) is wrestling silver medalist Sanan SULEYMANOV (AZE) on Mat C. He gets the first passivity point and then gets the lock over Suleymanov to score four points.

13:55: Zurabi Datunashvili and Islam Abbasov are wrestling on Mat A in the 87kg quarterfinals. Abbasov stunned world champ Datunashvili in Istanbul in February in the final.

13:50: Turpan BISULTANOV (DEN) with the first five of the day and he finishes his bout against Roberti KOBLIASHVILI (GEO) 8-0

13:45: That's a victory by technical superiority for Eldaniz AZIZLI (AZE) over Denis MIHAI (ROU) at 55kg and he books his place in the 55kg semifinals.

13:36: Victor CIOBANU (MDA) led 1-1 against Etienne KINSINGER (GER) with a minute remaining but was called passive. Kinsinger gets the turn from par terre to beat Ciobanu 3-1

13:30: Riza KAYAALP (TUR) and Beka KANDELAKI (AZE) have setup the semifinal at 130kg. A month ago, Kandelaki had pinned Kayaalp at the Yasar Dogu Ranking Series event in Istanbul.

13:18: Olympic silver medalist Iakobi KAJAIA (GEO) is wrestling Franz RICHTER (GER) at 130kg. Richter led 2-1 at the break and then added a takedown in the second period to upset Kajaia in the quarterfinals

13:10: Viktor NEMES (SRB) and Zoltan LEVAI (HUN) are involved in an intense battle. Nemes got the 1-0 lead after the passivity against Levai. But he is called passive in the second period and Levai leads 1-1. He gets the gut-wrench from par terre to make it 3-1

12:55: Malkhas AMOYAN (ARM) is looking formidable at 77kg. He wins his second bout 5-1 over Denis HORVATH (SVK) to move into the quarterfinal

12:46: Sanan SULEYMANOV (AZE) gets the point for Ilie COJOCARI (ROU) passivity. He then gets the four from par terre to lead 5-0. He adds two more takedowns and wins 9-0

12:45: Datunashvili is called passive again. But no points as this is the third passivity. Szilvassy has a chance to take the lead. But he fails to that. Datunashvili has 35 seconds to defend for the win. Szilvassy drops the bout 1-1

12:35: World champion Zurabi DATUNASHVILI (SRB) is coming up on Mat A for his opening round bout against former U23 world champion Erik SZILVASSY (HUN).

12:15: Malkhas AMOYAN (ARM) makes his 77kg debut after winning the world gold at 72kg with a technical superiority win over Mantas SINKEVICIUS (LTU) in the opening round

11:50: What a great start to the day. Beka KANDELAKI (AZE) moves on with a 10-0 win over Mykhailo VYSHNYVETSKYI (UKR) and Riza KAYAALP (TUR) does the same with a 9-0 win over Alin ALEXUC CIURARIU (ROU).

11:30: Welcome to day five of the European Championships. Greco-Roman wrestling is beginning and the stands are already full here