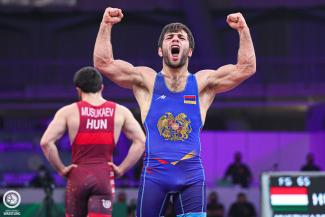 BELGRADE, Serbia (November 5) -- As we move towards the business end of the tournament, freestyle action takes center stage at the U23 World Championships in the Serbian capital. Wrestlers from 57kg, 65kg, 70kg, 79kg and 97kg will be on the mat for their qualification and semifinal Friday.

The semifinals for freestyle will begin at 1645 local time and we will be back for that. Thank you for following and join us for the next session.

1520: What a bout closing out the session! Vazgen TEVANYAN (ARM) was down 3-4 with about 15 seconds left and then he scores two points via takedown on the edge. Refs white paddle it but Armenia challenge and win it. 5-4 to Tevanyan with nine seconds left. He wins 5-4

1505: Georgios PILIDIS (GRE) was trailing 0-2 with just seven seconds left but he scored a takedown and leveled it 2-2 to earn the victory and move into the semifinal of 65kg.

1450: Two big matches coming up as Ernazar AKMATALIEV (KGZ) is wrestling on Mat A while Georgios PILIDIS (GRE) in on Mat C.

1425: Syrbaz TALGAT (KAZ) led 8-6 against Rezuan KAZHAROV (RUS) when the two arm-locked each other and went out of bounds. The refs called it no points but the Kazakhstan corner challenged it asking for two points. Challenge lost and it became 8-8 with Talgat leading on criteria. Kazharov then scores a final second takedown to win 10-8

1410: Jonathan AIELLO (USA) for the win! He scores a takedown to lead 4-4 on criteria and then hangs on to it to win against Shamil GADZHIALIEV (RUS). He will wrestle in the 97kg semifinals

1400: Strong start from Oslo Worlds silver medalist Ernazar AKMATALIEV (KGZ) at 70kg. He gives up two exposure points but has no trouble scoring 12 unanswered points to win 12-2 and reach the quarterfinals

1315: Ali SAVADKOUHI (IRI) continues his winning run and moves into the quarters with a 10-0 thrashing of Oktay HASAN (BUL).

1250: Mohammadnezhadjavan with a big four after Glory's exposure but the USA wrestler still leads. A lot of scramble there and it's 11-5 for Glory. The Iran wrestler has less than a minute to win this. He gets a takedown and then a gut to make it 11-9. He is looking for another gut and gets it on the edge. 11-11. 18 seconds to go. He defends the criteria lead

1240: Patrick GLORY (USA) and Ahmad MOHAMMADNEZHADJAVAN (IRI) are in an intense battle but it's Glory who leads at the half way mark 5-1

1220: Vazgen TEVANYAN (ARM) had a tough one to start against Shamil USTAEV (GER) but he hangs on for a 3-1 win. A takedown the difference

1200: Toktogul Uulu with a hard-fought win over Arushanian! They traded a takedown each but the Kyrgyzstan wrestler led 4-3 with ten seconds remaining. Arushanian tries hard to get a step out but Uulu circles back as time expire

1145: Pilidis gave up the lead 2-2 on criteria but he finds a final attack with a double leg and score two points to win 4-2. On the other side on Mat A, junior Euro champion Erik ARUSHANIAN (UKR) is facing Aibek TOKTOGUL UULU (KGZ).

1130: Junior world silver Ziraddin BAYRAMOV (AZE) gets a walkover in his first bout. We have to wait a little more to see him in action on the mat. Meanwhile, Tokyo Olympian Georgios PILIDIS (GRE) is making his way on Mat C

1120: Ibragim ABDURAKHMANOV (RUS) could not have asked for a better World Championships debut as he beats Colin REALBUTO (ITA) 11-0 with a strong leg lace

1110: On Mat B, Asian silver medalist Ali SAVADKOUHI (IRI) scores four straight points to beat VICKY (IND) 4-4 in the opening round at 79kg. It was a little tense for Iran there

1100: Junior Euro bronze Ramaz TURMANIDZE (GEO) is up against Saurabh IGAVE (IND). Two points to start for Igave and then he adds a four-point throw. Turmanidze starts the second period with a four-point and then adds a takedown to make it 7-6. Igave has locked a double leg and he will finish leading 8-7. The Georgian with a front headlock for exposure for two. India reversal and it's 10-9 Igave. Georgia challenge

1030: Welcome to day five of the U23 World Championships in Belgrade. The freestyle wrestlers are ready to begin the day. Another rainy day in the Serbian capital. We will have a few repechage bouts before moving to the qualifications.

BELGRADE, Serbia (November 8) -- Women's wrestling saw 10 new world champions crowned at the U23 World Championships in Belgrade, Serbia. Ukraine became the best team of the tournament with three gold medals, two silver and a bronze medal. The USA, France Canada, Romania, Ecuador, Kyrgyzstan and Poland had one champion each. Russia finished with five silver and two bronze medals to be number two in the rankings.