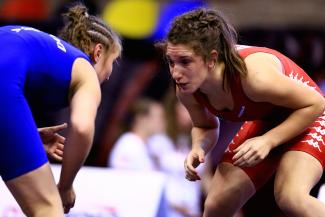 ISTANBUL (June 26) – Patricia LIUZZI (ITA), with her father in her corner, stuck to the plan and claimed her first major international title with a upset win Friday, the fourth day of the European junior wrestling championships

The 19-year-old from Naples upset European under-23 champion Alyona KOLESNIK (AZE), 8-2, in the 55kg final at Bagcilar Sports Complex, while reigning junior world champions Lyubov OVCHAROVA (RUS) and Sabira ALIEVA (AZE) ruled as they added junior European champion to their list of accomplishments.

But, for the Liuzzi family, the night belonged to Patricia as she hit a four-point double-leg takedown in the first period and then calmly passed behind Kolesnik’s increasingly urgent attacks with time running out.  Her father, by comparison, could barely contain his excitement.

“It was so emotional,” said Michele LIUZZI (ITA). “I was all…” stroking his forearm as if to say “pins and needles.”

The proud papa, then added, “Our tactics were to stay low and then wait for the opponent to make mistakes.”

Asked about her first major international title, Patricia could only say “This is the best; I’m so happy.”

Tosun had defeated Ovcharova, 16-10, in the 2014 championships in Katowice, Poland, so Ovcharova admitted to having “a little extra motivation to win tonight.” 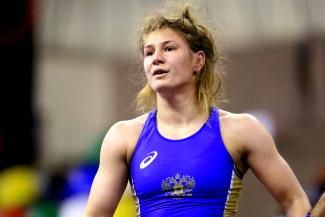 The 19-year-old junior world champ opened with a pair crisp single-leg to double-leg combinations for a 4-0 lead over the hometown favorite. Then, as Tosun attacked for points before the break, Ovcharova caught her in a headlock and twisted her to the mat for the fall.

“Going into the final tonight, I knew I wanted to end it with a fall,” said Ovcharova, who claimed her first European title at any level.

Asked about future plans, she confided that the “small step” is to win the junior world title again in Brazil.  She then added that her “big dream” is to wrestle and win at the 2020 Olympic Games in Tokyo. 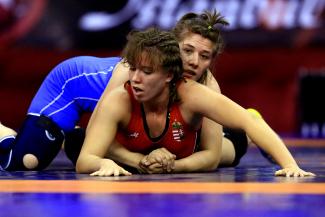 In the finale of the women’s competition, Alieva pressured 2014 European bronze medal winner Anastasia SHUSTOVA (UKR) throughout the 75kg final, ducking away from attempted headlocks for go-behind takedowns and an 8-2 victory.
​
Azerbaijan won the team title with Alieva’s title, three silver medals and a pair of bronze for 58 points. Russia, which could only manage a lone bronze medal on the first day of competition, came second with 50 points with a pair of gold and bronze medals each.

The championships continue on Saturday with action switching to Greco-Roman and the first four weight categories – 50, 60, 74 and 96kg.