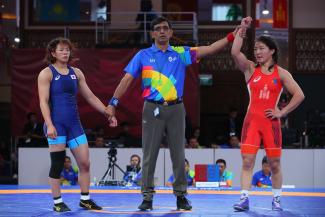 For most countries, four medals in four weight classes would be cause for celebration. But not if you're the Japan women's team and none of those medals are gold, particularly with two world champions in the competition--neither of whom made it to the finals.

Instead it was Mongolia, North Korea (twice) and, for the first time ever, India who had cause to smile as the women's wrestling competition at the Asian Games  got underway Monday on the second day in Jakarta.

Orkhon PUREVDORJ (MGL) pulled off the feat of the day when she won a clash of world champions, scoring a victory by fall in the 62kg semifinals over Risako KAWAI (JPN), who is also a reigning Olympic champion and had not lost in nearly three years.

Purevdorj followed that up by crushing Aisuluu TYNYBEKOVA (KGZ) with an 11-0 technical fall in the final to add the Asian Games gold to the 2017 world championship she won at 62kg in Paris.

Tynybekova is no slouch herself, having won the Asian gold and a world bronze medal at 58kg in 2017. But she was no match for Purevdorj, who has now won 10 consecutive international tournaments, including the gold at the Asian Championships in Bishkek earlier this year.

Purevdorj also holds the distinction of being one of the few wrestlers on the planet to have beaten four-time Olympic champion Kaori ICHO (JPN), having scored a technical fall victory over the legend in the final at the Yarygin Grand Prix in 2016.

In the semifinal against Kawai, Purevdorj was trailing 2-0 in the second period when she sent the Japanese to her back and finished her off with a fall at 3:47. The devastated Kawai spent a long while after the match sitting against a wall sobbing.

"I was caught off guard in an instant," Kawai told the Japanese press. "That is the fear of wrestling."

Kawai managed to compose herself and return for the bronze medal match, where she easily disposed of Thi My Hanh NGUYEN (VIE) by 10-0 technical fall in 2:58. RIM Jong Sim (PRK) snared the other bronze.


Kawai, who won the Paris 2017 title at 60kg and Rio 2016 Olympic gold at 63kg, will drop to 59kg in an attempt to defend her world title in Budapest in Hungary. So for now, there will be no rematch for Purevdorj.

For Yuki IRIE (JPN), a rematch with Vinesh VINESH (IND) produced the same disappointing result, but this time at a higher cost.

Meeting in the 50kg final, Vinesh took a 4-0 lead in the first period, then held off the Japanese national champion for a 6-2 victory. That was similar to the outcome of their semifinal encounter at Bishkek 2018, where Vinesh won 4-4 on big point en route to the silver medal. Irie won a bronze.

The victory made Vinesh, who knocked off Rio 2016 bronze medalist SUN Yanan (CHN) in the first round, the first Indian woman in history to win an Asian Games wrestling gold medal. It was against Sun in Rio that Vinesh suffered a serious leg injury that scuttled her Olympic hopes.

KIM Son Hyung (PRK), a bronze medalist at Paris 2017, and KIM Hyungjoo (KOR) won the playoffs for the bronzes.

For Irie, falling short of the gold was a particularly hard blow as she missed out on making Japan's team to the world championships. She defeated world champion Yui SUSAKI (JPN) at the national championships in December to earn a berth to Jakarta, but subsequently lost out to Susaki in a playoff for Budapest.

Japan's other current world champion in action in Jakarta, Haruna OKUNO, was also tripped up on the path to the final, suffering a heartbreaking 7-7 loss in the 53kg semifinal to Bishkek 2018 champion PAK Yong Mi (PRK).

Okuno, the Paris 2017 gold medalist at 55kg, trailed 4-1 after the first period, but fought back to go ahead 7-6 with 30 seconds left---only to give up a point for stepping out in the last five seconds to concede the victory on last point to Pak.

Pak went on to win the gold with a one-sided 11-0 technical fall in 5:29 over Zhuldyz ESHIMOVA (KAZ), a Bishkek 2018 bronze medalist and New Delhi 2017 silver medalist.

Okuno and Sumiya ERDENECHIMEG (MGL), the runner-up to Pak in Bishkek, took the bronze medals with first-period falls in the third-place playoffs.

The semifinal losses by Kawai and Okuno came on the heels of a loss at the same stage in freestyle 57kg by fellow world champion and compatriot Yuki TAKAHASHI (JPN) the previous day.

Jong chalked up four points with a double-leg takedown in the first period, then held on as Pei battled back with her own 4-point move in the second.

Meanwhile in the lone remaining weight class in freestyle, Parviz HADIBASMANJ (IRI) successfully defended his 125kg title to give Iran golds in the top half of the six divisions on the program.

Hadibasmanj had little trouble in forging a 7-0 decision in the final over DENG Zhiwei (CHN) to add to the golds won the previous day by Iranian compatriots Hassan YAZDANI at 86kg and Alireza KARIMI at 97kg.

Hadibasmanj's biggest challenge came in the semifinals, where he managed to scrape together an 11-8 win over man-mountain and Bishkek 2018 champion Davit MODZMANASHVILI (UZB).

Modzmanshvili and NAM Koungjin (KOR) came away with the bronze medals.

On Day 3 of the four-day competition on Tuesday, the women will finish up with the two upper weights, 68kg and 72kg, while the Greco-Roman gets started with the two lightest divisions, 60kg and 67kg. 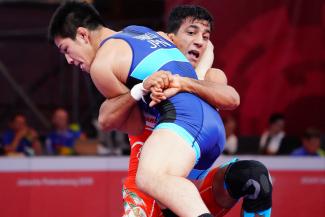 The winner of the big showdown between three current Asian champions all entered in the Greco-Roman 77kg class at the Asian Games on Wednesday was...none of the above.

Instead, it was Mohammadali GERAEI (IRI) who emerged from the pack to land on the top of the podium.

Geraei, one of two Iranian champions on the fourth and final day of the wrestling competition, scored an impressive 7-3 victory in the final over Akzhol MAKHMUDOV (KGZ), who had thrilled the home crowd when he won the 72kg title at the Asian Championships in Bishkek in February-March.

Hossain NOURI (IRI) followed with a victory at 87kg, giving Iran three of the six Greco-Roman golds at stake in the tournament using only the Olympic weight classes. Iran, however, missed chances for medals at 97kg and 130kg when both of its wrestlers lost bronze-medal matches.

Geraei, a bronze medalist at the 2017 World Championships in Paris at 71kg, had started the day by avenging a loss  to YANG Bin (CHN) in the 77kg final in Bishkek, putting the Chinese away with an 8-0 technical fall in 2:17 that he capped with a 5-point throw.

The other Bishkek gold medalist in the field, 82kg winner Ashkat DILMUKHAMEDOV (KAZ), never made it past the quarterfinals, where was dealt a 3-3 defeat on last point by Shohei YABIKU (JPN).

In the final, Geraei gained the first point for passivity, but on his spectacular lift-and-throw from the par terre position, he failed to expose Makhumodov's back to the mat and only gained 2 points.

Geraei padded his lead with two more 2-point moves, but on a third attempt, Makhmudov stopped him in mid-throw for a 2-point counter, making it 7-2 after the first period.

Neither wrestler could put together an attack in the second period. Makhmudov got one last chance in the final minute when Geraei was called for passivity, making it 7-3. But Geraei firmly resisted the Kyrgyz teen's gut wrench attempts to secure the victory.

Yang came away with a bronze medal with a close 4-3 victory over Yabiku. The other bronze went to KIM Hyeonwoo (KOR), who chalked up an 8-0 technical fall over Bishkek 2018 bronze medalist Shermet PERMANOV (TKM).

In the 87kg final, Nouri continued his reign over the continent by taking full advantage of a clearly fatigued Rustam ASSAKALOV (UZB), scoring five unanswered and largely uncontested points in the second period for a 6-1 victory.

Azamat KUSTUBAYEV (KAZ) captured one of the bronze medals, with some inadvertent help from opponent Harpreet SINGH (IND). Trailing 5-0 in the second period, Singh scored a takedown, then forced a passivity penalty to cut the lead to 5-3.

But Indian failed to properly take the par terre position, giving his opponent a penalty point and depriving himself of a chance to tie the score. Kustubayev then defended his 6-3 lead to the end.

Prior to the tournament, the 97kg class was deemed to be the most open and unpredictable, but even that couldn't detract from the surprise of CHO Hyochul (KOR)---10 days short of his 33rd birthday and 6 1/2 years after his last major tournament---walking away with the gold.

The stocky Cho ripped off a lightening-quick headlock throw for 4 points early in the second period, giving him a 5-4 lead that he made stick to defeat XIAO Di (CHN) in the final.

Cho prepped for Jakarta by posting ninth-places finishes in Tbilisi and Sofia this year, marking his return to international mat after a six-year absence. It was 10 years ago that he won a bronze medal at 84kg at the Asian Championships, before adding a silver in 2011.

Iskakov needed a long timeout to bandage a bleeding eyebrow, but still built up a 7-0 lead. In the second period, Heidari himself had to receive treatment and a bandage for a cut, before the bout suddenly ended when the Iranian was assessed a 2-point penalty for a head butt. An unsuccessful challenge made it officially a 10-0 technical fall at 4:25.

Uzur DZHUZUPBEKOV (KGZ) scored a first-period takedown, and that was enought to beat Jahongir TURDIEV (UZB), 2-0, for the second bronze.

Abdullaev built up a 7-0 lead in the first period with a passivity point, a 4-point throw and a 2-point roll. He ended the bout by forcing Tinaliyev out for his eighth point at 4:16.

In the bronze-medal matches, Arata SONODA (JPN) denied the host country an improbable medal with a fall in 52 seconds over Papang RAMADHANI (INA), while KIM Minseok (KOR) eked out a 1-1 victory over two-time Asian champion and favorite Behnam MAHDIZADEH (IRI), by virtue of his passivity point coming in the second period.

In the end, eight countries came away with medals in the six Greco weight classes, with Iran and South Korea each winning two golds. Kazahstan had the most medalists with five, although none were gold.