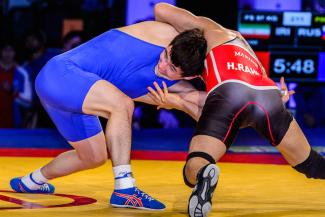 LOS ANGELES (March 16) – Flags, chants and songs persisted for a second night inside the LA Forum as the Iranian men’s freestyle team wrestled past a tough Russian squad to earn their third-straight World Cup title in men’s freestyle.

Though the zip code read Inglewood Sunday night’s finals often felt more like a stadium in Tehran. More than 3500 fans came to support teams from around the world, but no country was better represented than Iran, and when the wrestling was over Iran had powered past Russia for a dominating 6-2 team victory.

“I really didn't anticipate so many Iranians here,” said Iranian 61kg wrestler Masoud ESMAILPOOR. “It was like being in Iran. God willing, we'll come back again. We love to face America and compete with America.”

The night started with what would prove to be best-contested match of the event as two-time 55kg world champion Viktor LEBEDEV bested reigning 55kg world champion Hassan RAHIMI in an electric 4-3 decision at 57kg. Lebedev was down 3-2 with :15 on the clock when the Russian transitioned from a double leg and scrambled behind Rahimi for the last-second victory.

Though the upset at 57kg took some early energy out of the crowd, Masoud ESMAILPOOR hunkered down in the second match of the night at 60kg and worked outside singles legs and open doubles to beat Russia’s Aleksandr BOGOMOEV, 12-6.

The 66kg match was suppose to be closely contested until Iranian Sayed Ahmad PAHNEHKOLAIE found a four-point tight waist from the standing position. From there Pahnehkolaie poured on offensive attack after offensive attack, earning a technical superiority over Emeev, 10-0 and giving Iran the 2-1 team lead.

At 70kg Iran’s Mostafa HOSSEINKHANI squared off against Russia’s Khetik TSABOLOV in what had promised to be a competitive matchup at the newly formed non-Olympic weight category. After an early four-point moved was overruled, Hossenikhani put pressure on Russia’s Tsabalov and came away with the 9-0 victory, which pushed the team score to 3-1.

AKBARI, who the night before lost a heartbreaking match to American superstar Jordan BURROUGHS, suffered a bad loss to the energetic Akhmed GADZHIMAGOMEDOV who used three takedowns and a four-point maneuver to move past Akbari, 10-0. The Russian noted the fan support and gave them a sporting, though direct, fist pump after his win moved the team score to 3-2 in favor of the Iranians.

At 85kg it was Ehsan LASHGARI and Russia’s Anzor URISHEV who kept a physical match close. Lashgari, a two-time world medalist earning the 2-1 victory and moving the team score forward to 4-2.

Two-time world champion and team leader Reza YAZDANI sealed the gold medal for the Iranian team with a brutal onslaught of action against Russia’s Yuri BELONOVSKY, opening up a 10-1 lead in the first period before sealing up the match in the second with another takedown and 12-2 technical superiority victory.

Yazdani fell ill after the match and was ushered away by a medical team to receive treatment.

“I felt short on breath and they checked everything out – my heart and lungs,” said Yazdani. “I've been having some lung problems for about two years. Whenever I get a cold, it acts up. I had cold two weeks ago and was still not fully recovered.”

In the final match of the tournament 125kg wrestlers Anzor Khezriev (RUS) and Komeil GHASEMI (IRI) battled for six minutes, with Ghasemi prevailing, 3-0.

Before the gold medal finals, it was the Americans who enjoyed the rabid fan support of the Iranian side.

Angel ESCOBEDO (USA) started the American side off with an impressive, crowd-pleasing 11-0 technical superiority victory over Ukraine’s Sergiy RATISHNY. Yasar Dogu champion and No. 8 ranked Jimmy KENNEDY followed up with a 5-1 win over Vasyl FEDROYSHYN.

Brent METCALF found his favorite left side high crotch five times on way to earning a 12-2 technical superiority victory over Ivan PETRIV. Metcalf was a perfect 5-0 at the World Cup. Nick MARABLE followed up Metcalf’s performance with had fought 3-2 win over Andriy KVYATKOVSKY (UKR) at 70kg.

“I wanted to score more from par terre,” laughed Burroughs. “But, I ended up giving up that reversal. My goal is to score points all the time, and I’m happy that I could score on my feet.”

“Clayton’s been progressing for us nicely,” said USA head wrestling coach Zeke Jones. “He had a great training camp and has always done what is asked of him, and now he’s seeing the results.”

America’s only loss of the night came at 97kg as Ukraine’s Pavlo OLIINYK powered past J.D. BERGMAN (USA), 4-1.

Pool B, Round IV

Pool A, Round IV