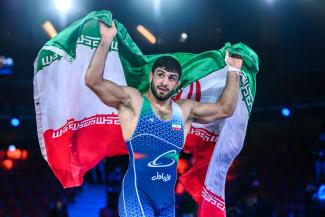 CORALVILLE, Iowa (November 22) -- Iran’s lineup for the Freestyle World Cup has been released.

The Freestyle and Women’s Wrestling World Cup will be held at Xtream Arena in Coralville, Iowa, December 10-11. It is the first time that freestyle and women’s wrestling will be held together side-by-side at the World Cup.

The World Cup is the annual international dual meet championships, conducted by United World Wrestling. The top five teams in freestyle and the top five teams in women’s wrestling from the 2022 Senior World Championships in Belgrade, Serbia in September have confirmed their participation. There is also an All-World Team in each discipline, featuring the top available athletes from the World Championships in each weight class that were not from a nation that qualified for the World Cup.

The Iran World Cup team will feature five senior world medalists, as well as seven others who have won world medals at the age-group levels.

Iran, which placed second at the 2022 World Championships in freestyle, will be joined in the World Cup by the first-place United States, third-place Japan, fourth-place Mongolia and fifth-place Georgia, in addition to the All-World Team.

The rosters of the World Cup teams for the other nations have now all been announced by USA Wrestling.

A special Presentation of Teams and Team USA Meet & Greet will also be held on Friday, December 9 at 6:45 p.m. It is free and open to the public.