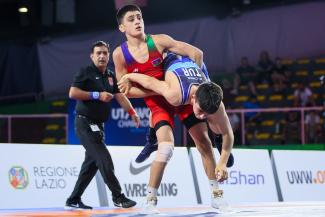 ROME, Italy (July 25) -- Four different continental champions reached the gold medal bouts on day one of the U17 World Championships in Rome, Italy.

Ronit SHARMA (IND) at 48kg, Faraim MUSTAFAYEV (AZE) at 55kg, Joel ADAMS (USA) at 65kg and Laszlo DARABOS (HUN) at 110kg will be looking to add a world gold after being crowned continental champions last month.

Out of the five weight classes that were competed on the opening day at the Pala Pellicone, Azerbaijan put all five wrestlers into the semifinal with Turkey and Iran sending three each. India and Ukraine entered two wrestlers each in the semifinals while Kazakhstan, the USA, Bulgaria, Uzbekistan and Hungary put a wrestler each in the last four.

By the end of the day, Azerbaijan, India, Turkey and Iran managed to send two wrestlers each to the five finals, two of which will see rematches of the continental finals. 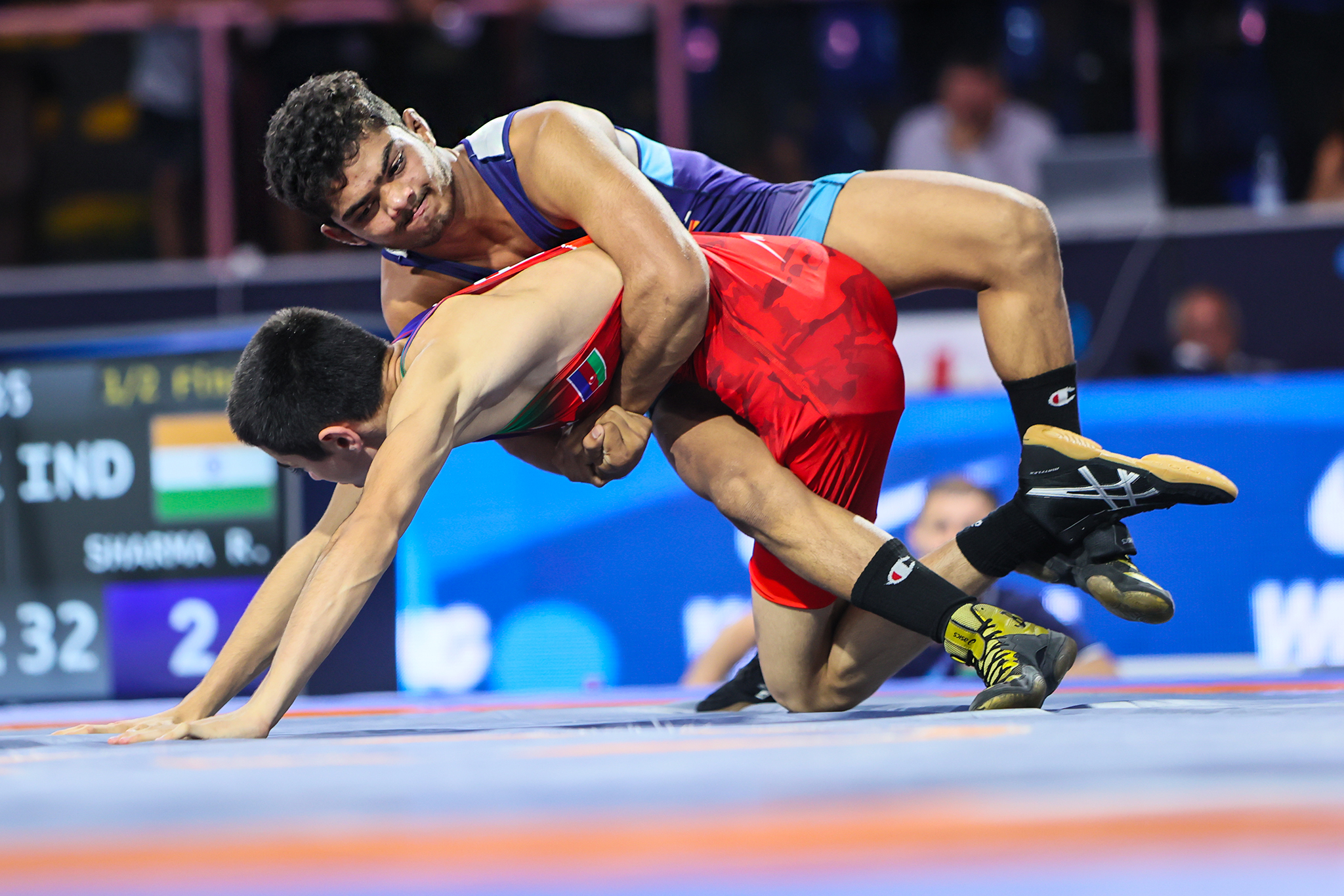 Sharma set up a rematch of the U17 Asian Championships final against Ali AHMADI VAFA (IRI). He won the bout in Bishkek 7-6 despite losing the earlier group stage bout to Ahmadi Vafa. With the head-to-head record tied at 1-1, it will be interesting to see who takes the lead when the two clash in the final Tuesday.

Outscoring his opponents 26-0 in three bouts, Sharma was equally impressive in the semifinal against Said KHALILOV (AZE). He opened the scoring with a takedown and showcased solid defense using underhook. After the break, Khalilov was called passive which resulted in Sharma getting a turn from par terre to lead 5-0. He ended the bout 7-0.

Ahmadi Vafa had the same score against Arsen ZHUMA (KAZ), an Asian bronze medalist, in the semifinal. But his earlier bouts were close one-point wins. He began with a 2-1 win against Tigran GALSTYAN (ARM) before beating Kurmanbek ALIMZHANOV (KGZ) 5-4, thanks to a late exchange that resulted in two points for each wrestler. 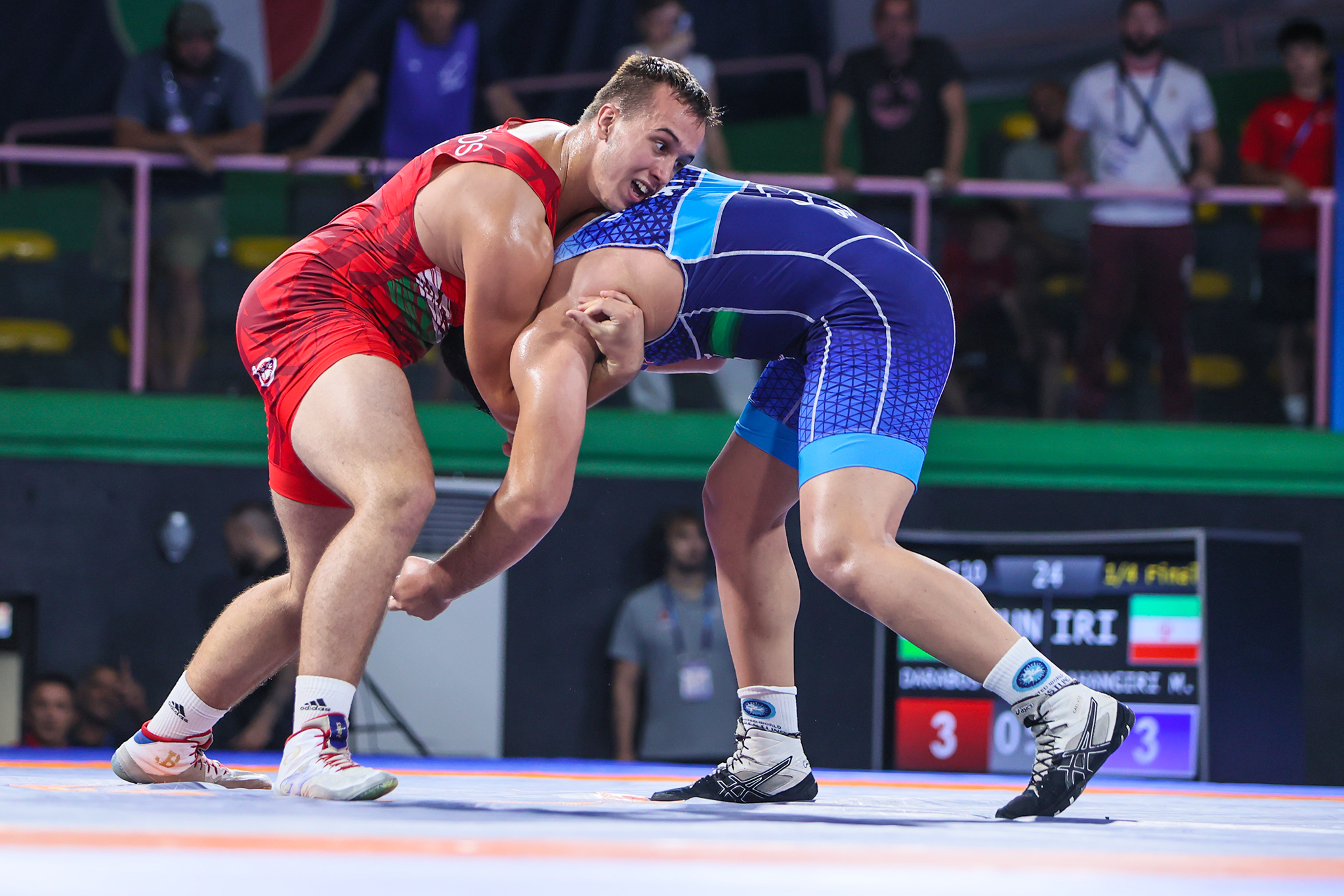 In another continental final rematch, U17 European champion at 110kg Laszlo DARABOS (HUN) will face Cemal BAKIR (TUR) on Tuesday.

Darabos dominated like he did in Bucharest a month ago and a golden repeat is on the cards if he continues his form Tuesday. He had pinned Bakir for the gold ar the Euros.

Incidentally, the semifinals at 110kg in Rome were the same as the U17 European Championships and both Darabos and Bakir ended up having similar scores from that tournament.

Darabos wrestled Dmytro STRYZHEKOZIN (UKR) in the semifinal and once the Ukrainian was called passive in the first period, the Hungarian wrestlers worked a strong gut wrench to end the bout 9-0 before the break.

In the quarterfinals, he defeated U17 Asian champion Mohammad JAHANGIRI (IRI) in a tense fashion, winning 5-4.

Bakir took a minute extra than Darabos but he got the job done in an equally dominant fashion. Mazaim MARDANOV (AZE) gave up a takedown in the first period to trail 2-0 at the break. But the referee called him passive and from there, Bakir scored six points, three turns from par terre, to win 9-0.

With the win, he gets a chance to avenge his European loss to Darabos and claim the gold medal at the World Championships. 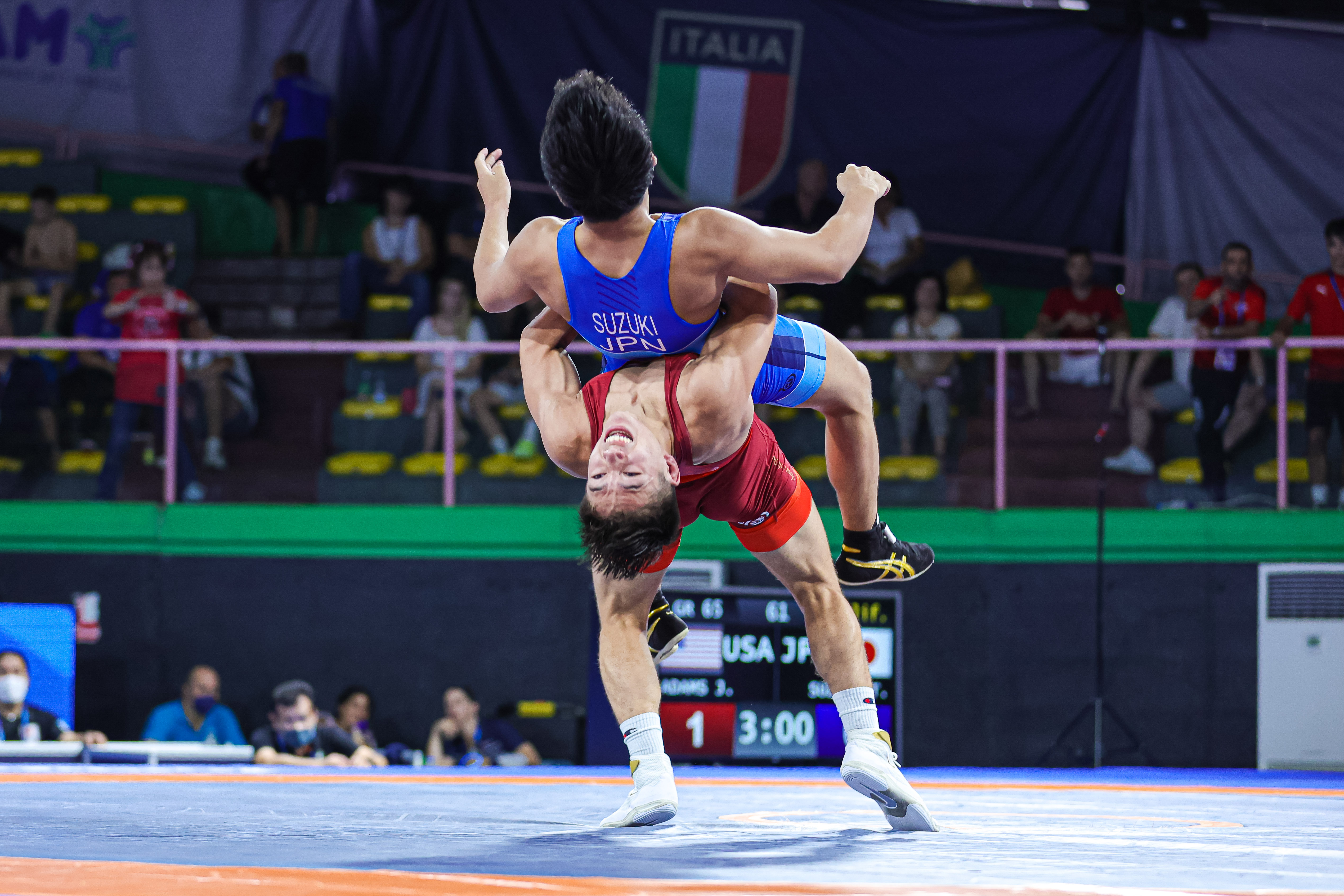 One of the stars of the day was Joel ADAMS (USA) as the Pan-Am champion put on a show to reach the 65kg final against Ahoura BOUVEIRI (IRI).

Adams began the tournament with a dreamy five-pointer against Takaku SUZUKI (JPN). He then toyed with Saya BRUNNER (SUI) for an 8-0 win in the pre-quarters. He faced his toughest test in Aleksandre RUSITASHVILI (GEO) in the quarterfinals but dominated the bout for a 6-0 win.

In the semifinals, he was up against Petro SHAFRANSKYI (UKR) and began with a one-on-two drag and got the takedown. Just when Shafranskyi looked to get heavy in the second period, Adams hit a duck under and scored another takedown. He won 6-0 to set up the final against Ahoura BOUVEIRI (IRI).

At 55kg, Faraim MUSTAFAYEV (AZE) will look to add world gold to his European title after he reached the 55kg final. But he will have to work harder than he did Monday as he faces a strong opponent in SURAJ (IND).

Mustafayev wrestled three bouts to make the final and looked effortless in all of them. In the quarterfinal, he faced Saba SURMANIDZE (GEO) and pinned him, an equally dominant win as his European quarterfinals in which he won 8-0 against Surmanidze.

In the semifinal, Halil CINAR (TUR) tried stopping Mustafayev but got taken down early in the bout. Mustafayev used an exposure and stepout to lead 5-0. In the second period, he got a takedown and a big throw to win 11-0. 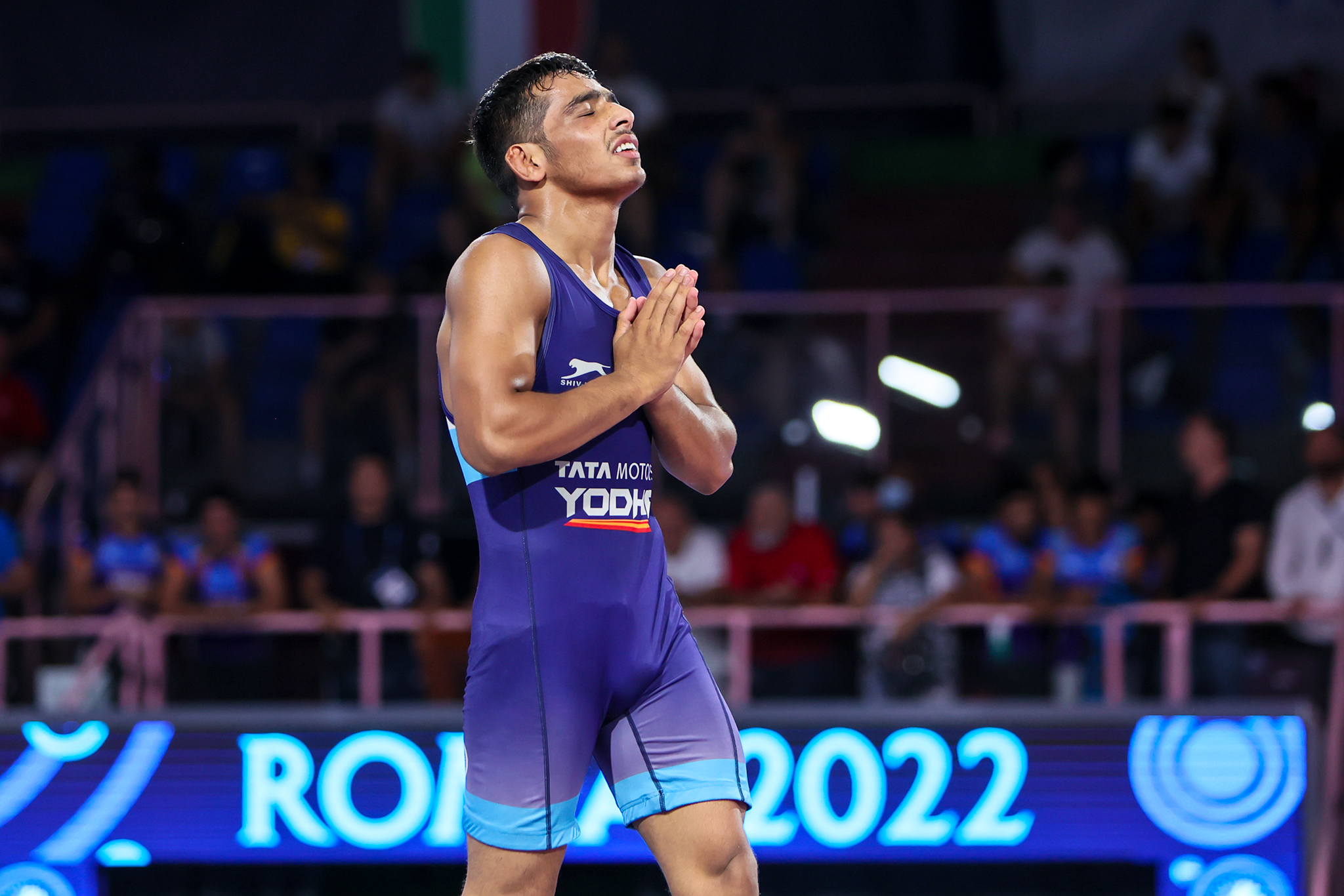 Suraj, who finished fifth at the U17 Asian Championships after losing to Khurshidbek NORMUKHAMMADOV (UZB) and then to Byeonggi SEO (KOR), avenged his opening round loss to Normukhammadov at the biggest stage. He beat the Uzbekistan wrestler 7-3 in the semifinal.

It looked like Normukhammadov will take the bout again after leading 3-0. But Suraj added a takedown before the break to cut the lead to 3-2. When he got the par terre advantage in the second period, he got two turns over Normukhammadov with ease and controlled the bout to win 7-3. 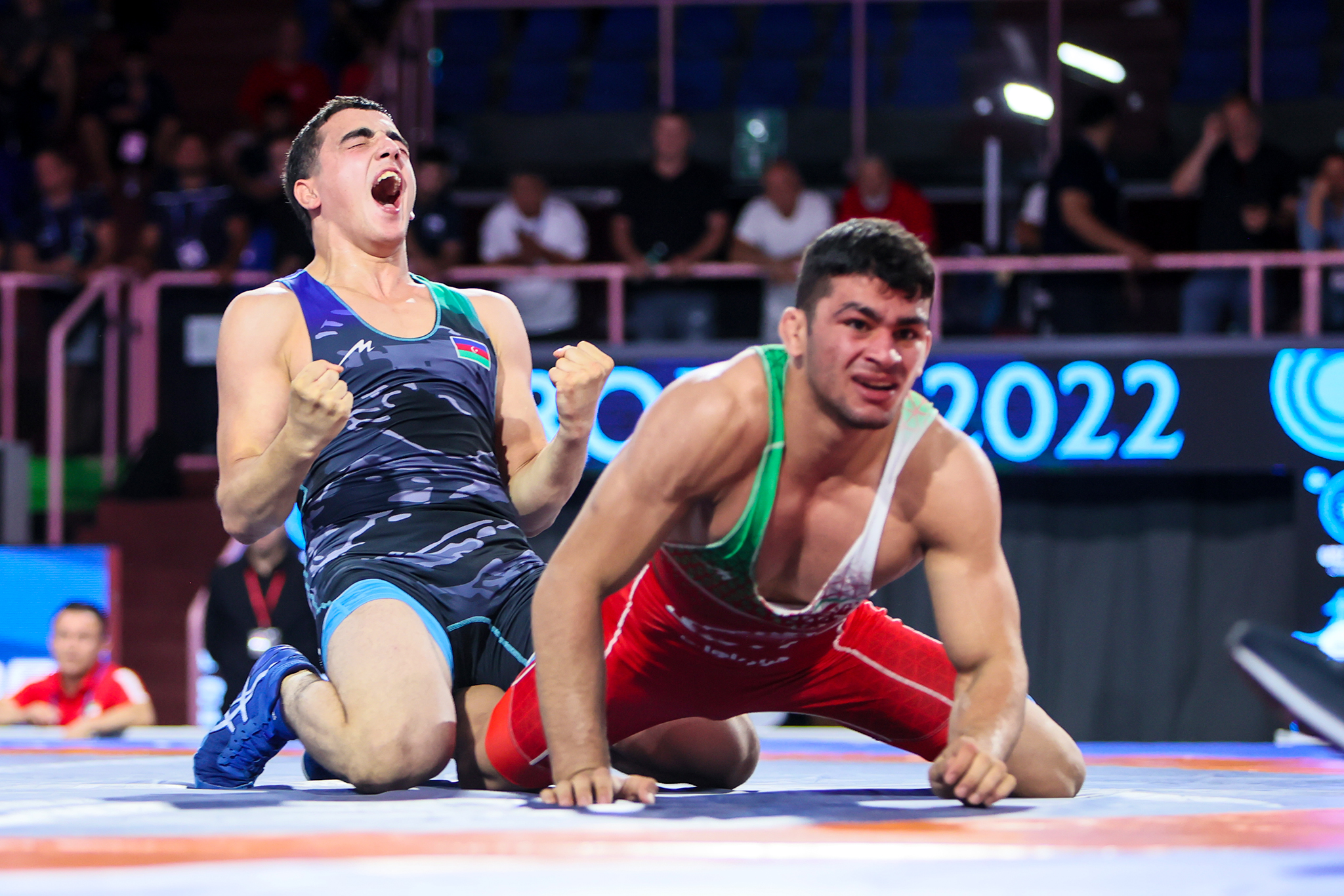 At 80kg, a mini-European battle ensued throughout the day. In the end, silver medalist in Bucharest Ismayil RZAYEV (AZE) and fifth-placer Alperen BERBER (TUR) made it to the final and will wrestle for the gold.

European champion Mihai GUTU (MDA) lost to Luka GELASHVILI (GEO) 5-2 in the qualification. Later, Gelashvili suffered a 3-0 defeat against Berber, who had lost to Gutu in the opening rounds of the Euros.

In the semifinals, Rzayev faced U17 Asian silver medalist Seyed Reza AZARSHAB (IRI) but was quick to finish the bout after getting the gut wrench from par terre in a 9-0 win.

Berber too was quick to move on with a 9-0 win over Andrey ATANASOV (BUL) and set up the gold bout against Rzayev.

After the medal bouts of these five weights, qualifying and semifinals of the remaining five Greco-Roman weights -- 45kg, 51kg, 60kg, 71kg and 92kg -- will be in action Tuesday.

USA closes out U17 Worlds with 3 golds, historic FS title 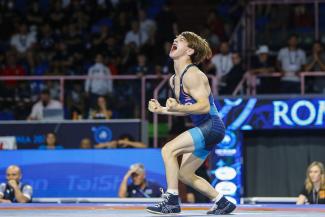 ROME, Italy (July 31) -- James GREEN (USA) was part of the USA team which won the freestyle team title for the first time in 22 years at the 2017 World Championships. The two-time world medalist won a silver medal in that edition.

Five years later, Green got another chance to hold the team trophy, this time as the chief coach of the USA team at the U17 World Championships in Rome on Sunday.

USA won a historic first U17 freestyle world title in Rome with nine out of their 10 wrestlers winning medals including four golds. It finished with 190 points which was more than enough to exchange places with defending champions India which finished with 126 points.

Azerbaijan, a nation that won the European team title, finished third with 122 points.

USA became the fourth nation to win the U17 world freestyle title after Russia, Iran and India since the U17 Worlds were reinstated in 2011. Russia won the title every year until 2018 when Iran broke that streak.

Russia won again in 2019 before India became only the third country to win the title in 2021. 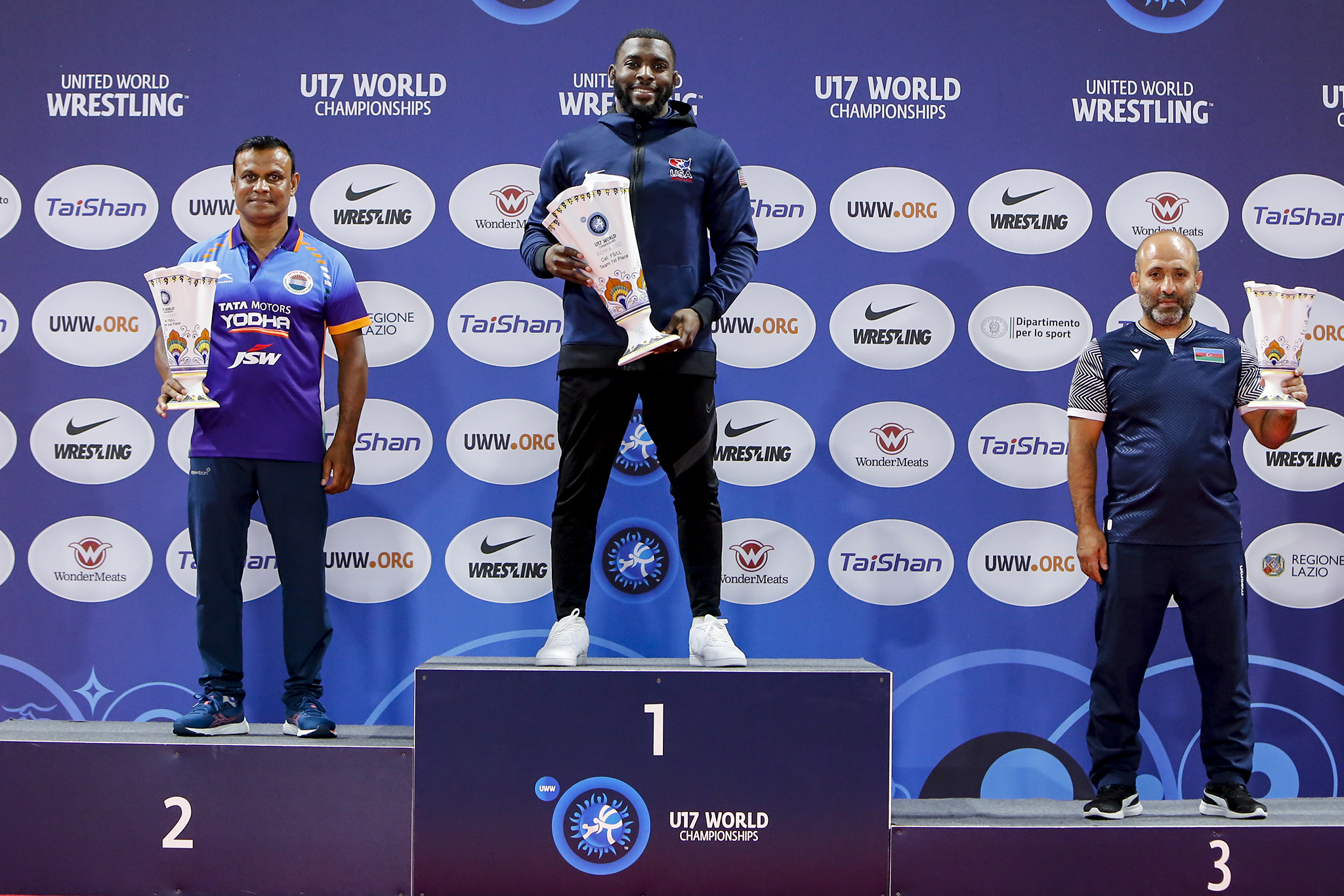 "It feels like it's straight out of a movie," he said. "It's like a reminiscent of 2017 when I was part of the world team that won the title for the USA after 22 years."

After finishing with a gold, three silver and a bronze medal on day six, the USA rocked again on the final day with three gold and a bronze to close out the tournament.

"I know how these guys are feeling," he said. "I am so excited to win this on my first trip and looking forward to more coaching."

Since 2011, the USA finished in the second spot five times in nine U17 Worlds with the latest being to India at the previous edition. But this year, all the USA wrestlers won their head-to-heads against India which ultimately proved to be the difference between who became the champions.

"The draw kind of worked in our favor," Green said. "We definitely had a gameplan not just for India but for everyone else including the Europeans as well.  But I can tell you one thing that our wrestlers wanted to get a hand on Indian wrestlers because we lost to them last time." 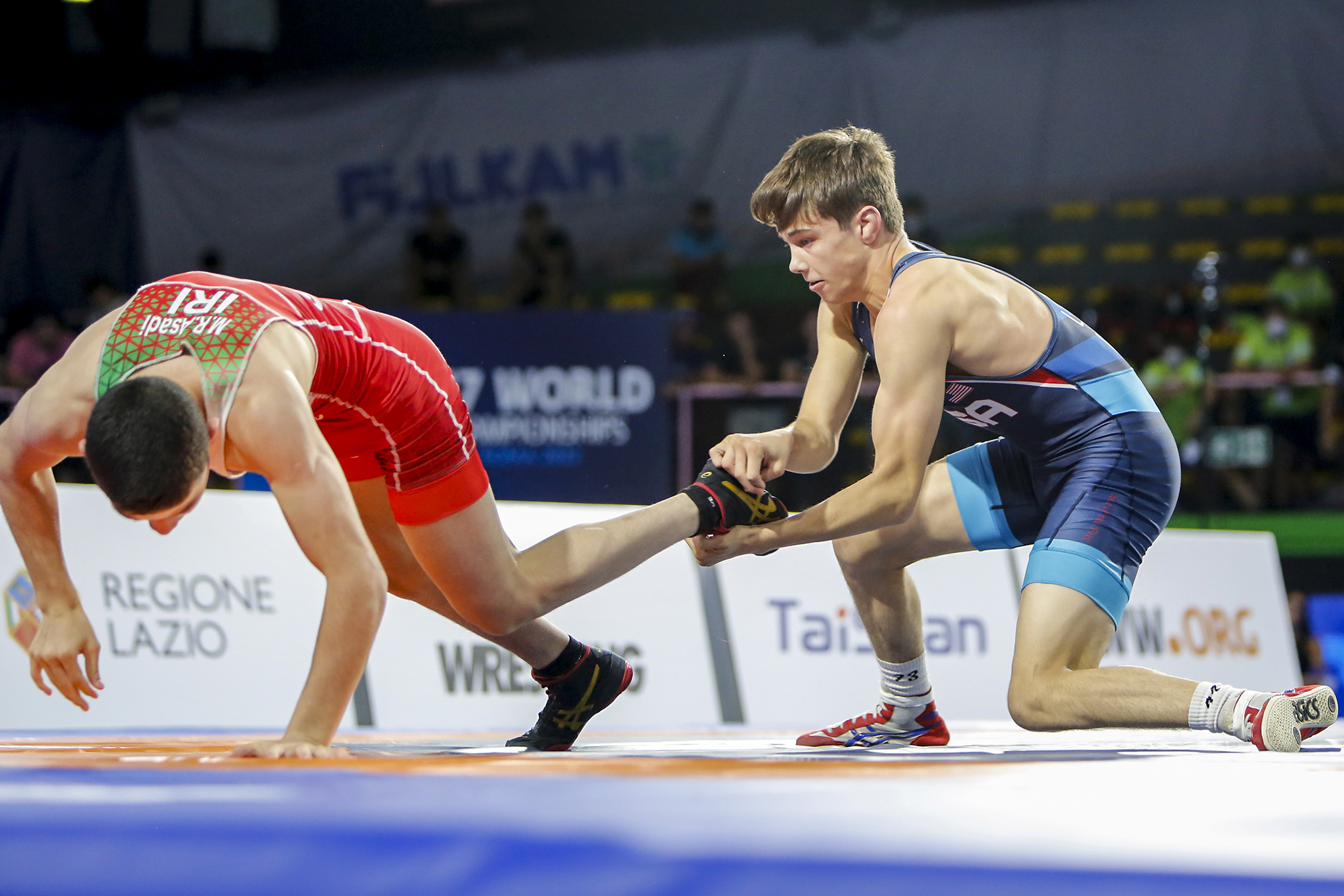 Luke LILLEDAHL (USA) finished with a silver medal in 2021 after suffering a loss against Aman GULIA (IND) but there was no stopping Lilledahl this year as he upgraded to gold with a dominating 10-1 win over Mohammad Reza ASADI (IRI).

The 51kg final, pretty much controlled by Lilledahl, began with two exchanging stepout but then the USA wrestler switched levels after the break and scored takedowns whenever he found Asadi going for a half shot. He countered two of Asadi's attacks while he scored a takedown and added a leg lace in his 12-1 victory for the gold medal.

"Luke wrestlers at a hard pace," Green said. "He keeps a low head but is always moving and engaging. He takes the points as they come and doesn't rush into attacks."

Munaretto won the 45kg gold medal by beating Bashir VERDIYEV (AZE), 2-0 in the final. Overall, the champion outscored his opponents 30-2 in the tournament. 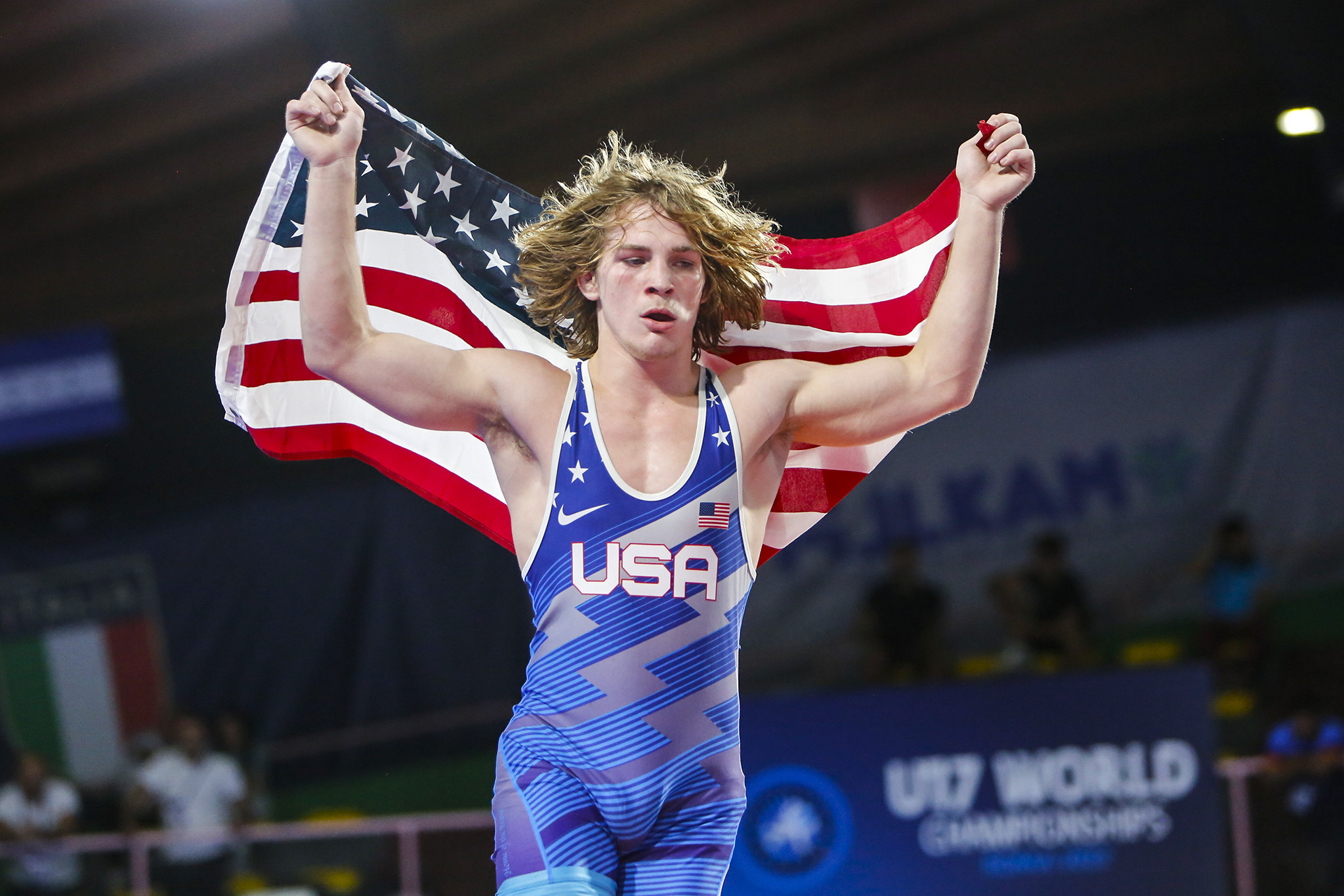 Sealey, like his all other bouts, was wrestling at a completely different level and pace which Caso had no answer to. When Caso tried to engage in underhooks, he would get tripped by Sealey and when he tried to score a takedown, Sealey would easily stop any such attempts.

His two inside trips and two takedowns were enough to help Sealey win the crown and get some praise from coach Green.

"Sealey was very impressive," he said. "He wrestles like a senior athlete and can wrestle someone from that level. He conceded the least points in the whole tournament."

Sealey wrestled five bouts to win the gold and in an impressive record, scored 55 points and conceded only one.

Drawing experience from the title-winning run in 2017, Green had communicated to his team to 'have fun' during the tournament.

"I just told them that you are capable of being world champs and future Olympic champions," he said. "But more importantly I told them to have fun at this tournament. Most of these guys are wrestling for the first time and they can be hard on themselves so I didn't want that. And once we all met, they had the team chemistry and it clicked right away." 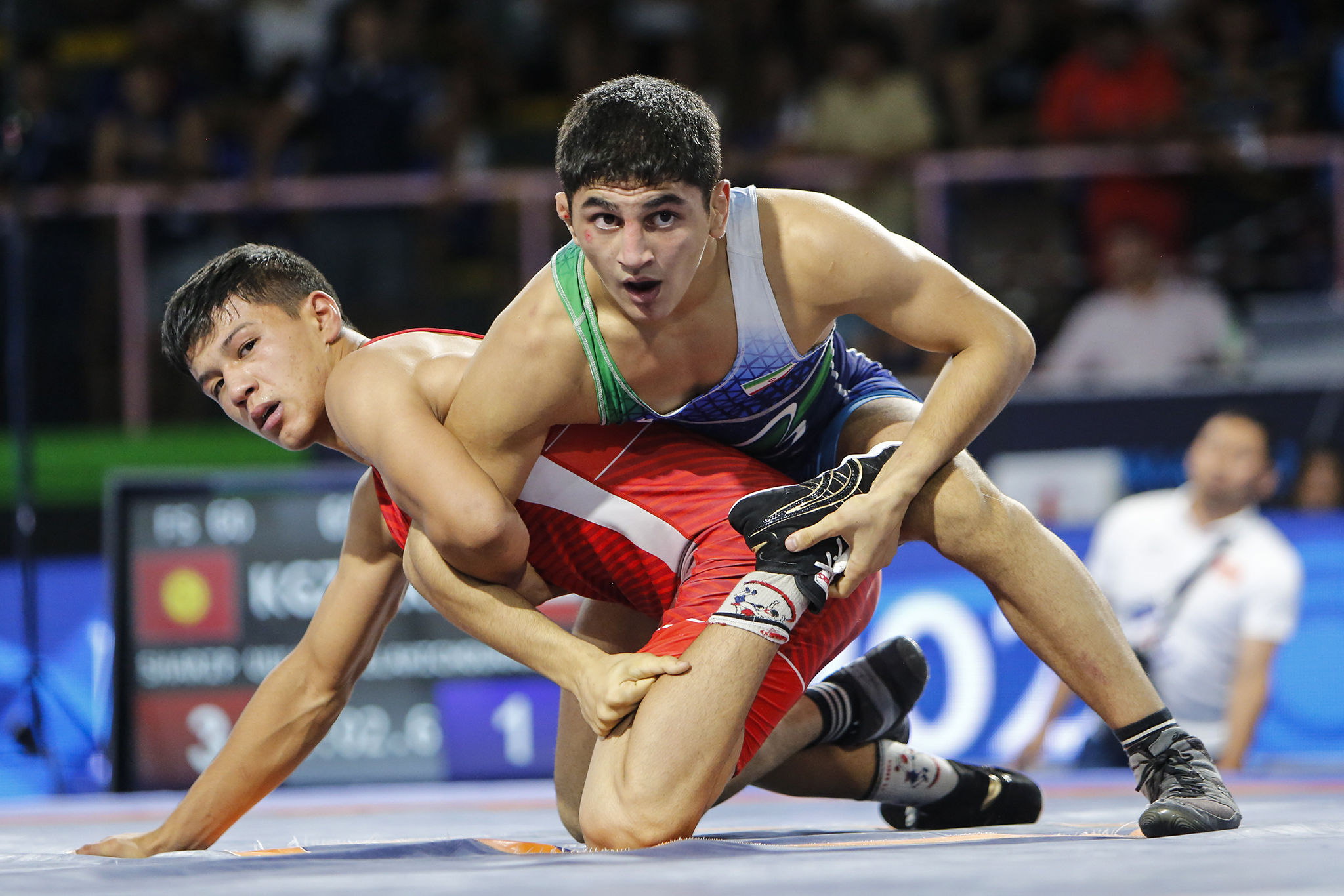 The other gold medals of the night were shared between Iran and Kazakhstan.

At 60kg, Ebrahim ELAHI (IRI) defeated U17 Asian champion Bilol SHARIP UULU (KGZ), 5-4 to win the gold after trailing 3-1 at one point. Sharip Uulu scored the first points with a duck-under during the activity period against Elahi. It was initially awarded as four but Iran challenged the call and it was reversed to two points only.

But Elahi's constant moves towards Sharip Uulu's legs paid dividends as he leveled the score 3-3 and led on criteria. He then added a takedown against the tiring Kyrgyzstan wrestler to extend his lead to 5-3. He was warned for fleeing during the final 10 seconds which made the score 5-4 but did not change the result.

Elahi's gold was Iran's first of the tournament as it finished fifth in the team rankings. 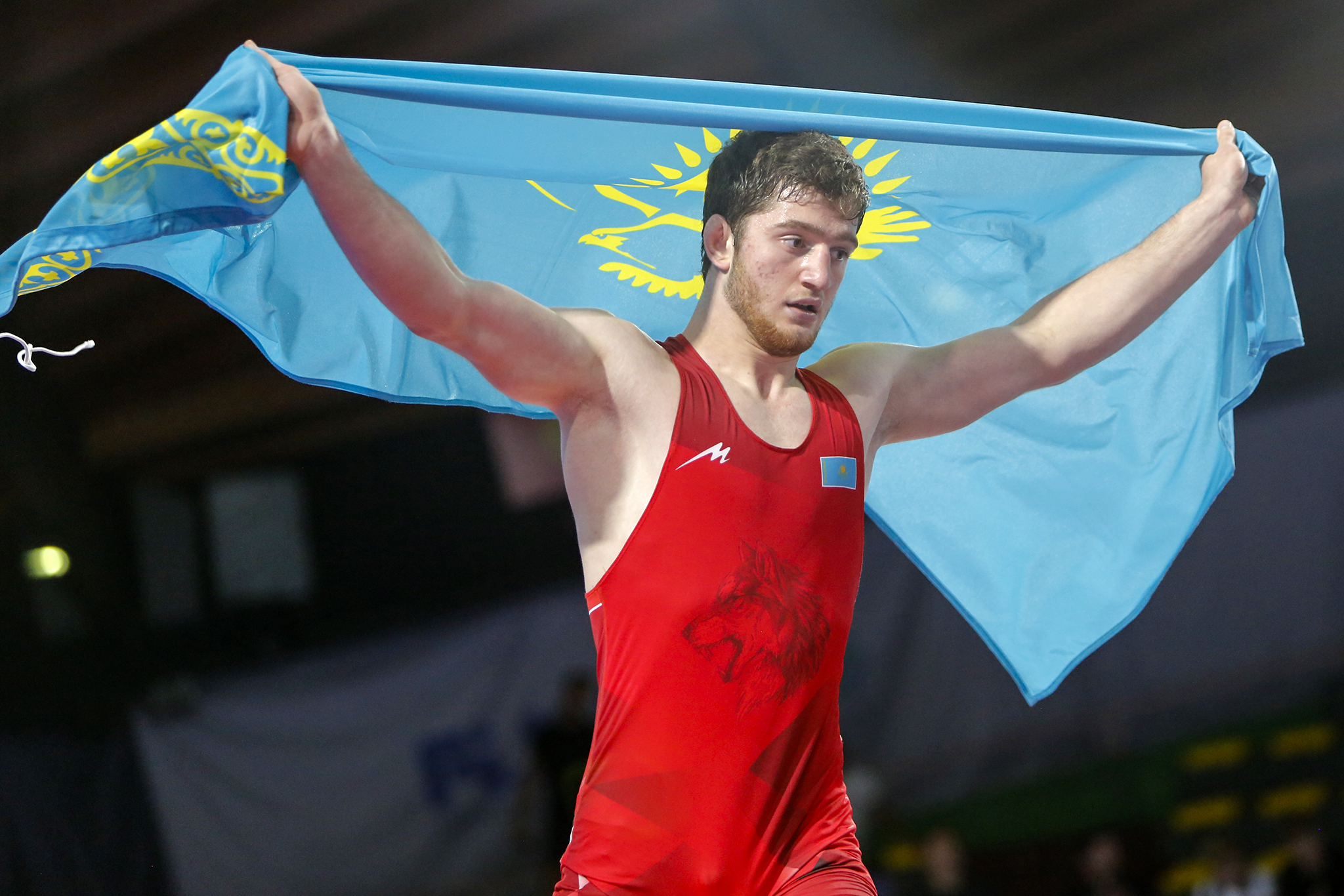 Returning bronze medalist Kamil KURUGLIYEV (KAZ) went all the way this year and captured his maiden world title, a month after he had won the U17 Asian title.

After a 3-0 lead in the first period, Kurugliyev began the second with a huge double-leg for four and then added two takedowns to close out a statement win in Rome.

The World Championships season will now move to Sofia, Bulgaria with the U20 Worlds beginning August 15.