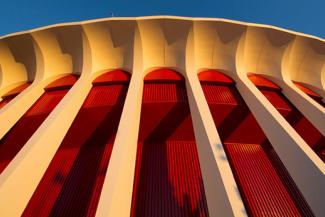 USA Wrestling has announced that the 2014 FILA Freestyle World Cup will be held at The Forum, presented by Chase, March 15-16 in Inglewood, Calif. The World Cup is the annual international dual meet championships, and will feature the top 10 men’s freestyle wrestling teams in the world.

This historic venue will provide a tremendous setting for the best Olympic-caliber freestyle wrestlers in the world. The Forum was home to “Showtime” ,the legendary Los Angeles Lakers of the NBA, featuring such stars as Magic Johnson, Michael Cooper, Kobe Bryant, James Worthy, Shaquille O’Neal  and a talented cast of other superstars coached by Pat Riley and Phil Jackson.

It was also home to the Los Angeles Kings of the NHL, featuring Canadian legend Wayne Gretzky, and the Los Angeles Sparks of the WNBA for many years. It also was the venue for basketball at the 1984 Olympic Games, where Bobby Knight coached the U.S. team of college players to the gold medal.  That team featured such stars as Michael Jordan, Pat Ewing, Wayman Tisdale and the elite collegians of the U.S.  Two Olympics later the United States introduced the “Dream Team” in 1992 made up of NBA stars who had passed through The Forum on their way to Barcelona.

The Forum underwent a reinvention that has created a thriving venue for both artists and music fans. The Forum opened on January 15 as the largest indoor performance venue in the country designed with a focus on music and entertainment. It will be configured specifically for international wrestling, with a seating capacity of approximately 7,500 for the Freestyle World Cup.

The 10 nations which will compete for the World Cup are (alphabetically): Armenia, Georgia, India, Iran, Japan, Mongolia, Russia, Turkey, Ukraine and the United States. Nations were invited based upon final team standings at the 2013 World Championships.

The most recent Freestyle World Cup was held in Tehran, Iran, in February 2013, with Iran winning the team title, Russia placing second and the United States placing third.

Teams will be randomly drawn into the two pools, which will be announced prior to the start of the competition. For more information, visit:www.wrestlingworldcup.com

The local organizing committee has been structured, benefitting from the talent and membership of Beat the Streets Los Angeles, California USA Wrestling, the Titan Mercury Wrestling Club, the Semnani Family Foundation and other strong Los Angeles-based sports organizations.

This will be the second major international wrestling event held in Los Angeles within a year. United4Wrestling, which featured the United States, Russia and Canada competing in men’s and women’s freestyle wrestling, was hosted at LA Coliseum on May 19, 2013. This successful event was an important competition in helping wrestling display its worldwide appeal and retain its status as an Olympic sport.

The final event schedule and ticket distribution plan have been finalized. Discounted All-Session tickets will become available to the general public on Wednesday, February 12, via Ticketmaster, through http://www.ticketmaster.com/, www.fabulousforum.com, and The Forum Box Office. The phone number for Ticketmaster is 800-745-3000.

The discounted All-Session tickets for the two-day event will be available for a limited time, and at three price levels:

All Ticketmaster purchases are subject to a convenience fee.