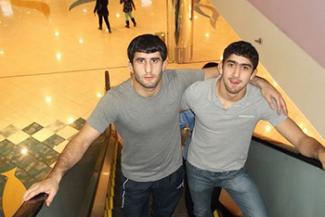 At only 21 years old, and already in possession of one Olympic gold medal, the Azerbaijani star is in the rare position to compete in four Olympic games. Should he win gold at the next three Games Asgarov would lay claim to being the most dominant wrestler in Olympic history.

Asgarov is the first Olympic gold medalist born in Azerbaijan after it obtained independence from the Soviet Union in 1991. Though the country has been dominant on the international scene for years, much of that success came through transfers. Asgarov proved that Azerbaijan had what it took to compete on the international level.

To win his first Olympic gold Asgarov needed to defeat four-time world champion and 2008 Olympic Bronze medalist Besik Kudukhov. Kudukhov came into the gold medal match heavily favored and was looking to solidify his place as one of the best ever with an Olympic championship.

But in the end it was the 19-year-old Asgarov who proved too much for the much-celebrated Kudukhov, overwhelming the Russian in a dominating performance.

The Azerbaijani had completed an Olympic run that once completed had seemed destined from the start.

“I wasn't surprised,” said Olympic bronze medalist Coleman Scott (USA). “I knew he was good, I knew it would be a good match, anything can happen in the Olympics and he was ready to go.”

His first medal hanging in his home, Asgarov now has a shot at a record-breaking career, but he must overcome a series of four obstacles, any of which could block his way to four gold medals.

First, in future competition, he will compete at a higher weight. Asgarov competed at 55 kg in 2011 and has since experienced an incredible growth spurt. Even though he had recently moved up in weight, he enjoyed a noticeable size advantage over his 60 kg opponents at the 2012 Olympics. In the finals he dwarfed Kudukhov, and his opponent in the prior match, Scott, was keenly aware of Asgarov’s imposing stature.

“He was a head taller than me,” Scott observed. “And I thought I was tall for the weight.”

After the London games, Asgarov’s trainer revealed the young Olympic champion had to lose a considerable of weight to make the 60 kg limit. In future events, the newly minted Olympic gold medalist will compete in the 65 kg weight class where he will not be able to overwhelm opponents on size alone.

Second, he will need to remain perfect against stiff competition in the 65 kg weight class, one of wrestling’s most talent-rich division. All the other three-time Olympic wrestling gold medalists, Alexander Karelin, Bouvaisar Saitiev and Artur Taymayzov, all had a chance to win a fourth, but slipped up against an elite opponent. Asgarov will have to deal with incredible talents such as Tatsuhiro Yonemitsu of Japan, Mehdi Taghavi of Iran, Livan Lopez of Cuba and of David Safaryan of Armenia, if he hopes to become history’s first quadruple Olympic wrestling champ.

Third, Asgarov needs a decade of continued health. Injuries, particularly in a sport as physically punishing as wrestling, are common, and have derailed more than a few attempts at repeat Olympic success. Azerbaijan’s coaches and trainers need to keep an eye on Asgarov to ensure his body does not break down in the coming years.

Finally, Asgarov’s greatest obstacle may be success itself. After his victory in London, Asgarov received an impressive sum money from the government of Azerbaijan, along with some very valuable prizes. At only 20 years of age, he has already parlayed his wrestling success into financial stability, and a new farm outside his home city of Ganja.  The material incentives that may have driven his past success, no longer provide the same sort of compulsion.

Furthermore, wrestlers who climb to the top of the mountain remember the intense pain they felt on the way up, and might not be too eager to start another ascent. Acting chief coach of Azerbaijan, Magomed Aliomarov, explained how athletes find it difficult when returning to competition after an Olympic gold in an interview with Azerisport.com.

“This is normal, when a wrestler reaches the summit, he reluctantly returns to the mat,” said Aliomarov. “For Olympic champions, who realize their dreams and get all the benefits, it is hard to get to start all over again, because he knows like no other, the difficulties and anguish through which he must pass in order to reach the goal.”

Indeed, Asgarov has found it hard to get back on the mat. While he voiced his intention to return to competition last year, he will wrestle in his first tournament since the Olympics in February’s Yasar Dogu Grand Prix in Turkey.

Once Asgarov returns, if he can refocus on what made him successful in past, he has what it takes rewrite wrestling history by adding numerous World and Olympic Championships to already sterling resume which includes a Junior World gold medal and Senior World silver to go along with his Olympic gold. Past opponent Scott seems confident in the Azerbaijani’s abilities.

“He's a winner,” said Scott.  “He knows how to win, he's been in those positions and has had a lot success with what he does. He’s won at every level.”

Though many pieces must still fall into place, Togrhul Agarov has a very real chance to stake his claim as the greatest wrestler who ever lived. Wrestlers this special only come along once in a generation, and world should pay rapt attention as this young man from Azerbaijan wrestles with history.