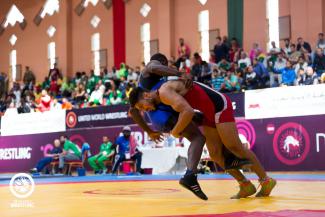 Abdelmottaleb, who placed ninth at the Olympic Games in Rio, outscored his opposition 19-1 in two matches at 125kg.

Moustafa, who won a silver medal in the junior freestyle competition earlier in the week, opened with two technical falls to reach the finals against Ali Ayari (TUN). In the finals, Mousta gave up the first point off the shot clock, but scored a takedown late in the first period to go up 2-1. He would add two more points off step outs to win 4-2.

Badawi added a senior gold in freestyle after winning a junior gold on Friday.  In the finals he topped returning champion Mohamed SAADAOUI (TUN) by injury default. Badawi built a 4-0 lead on the strength of two takedowns, but Saadaoui battled back to take the lead with a takedown and two-point exposure. Saadaoui added a point off a step out in the second period to to go up 5-4. Badawi came back with two takedowns off leg attacks to regain the lead at 8-5. The two locked up in the final 15 seconds, and Saadaoui suffered an injury to his left leg and was unable to continue. 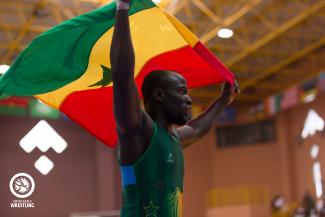 Adama DIATTA (SEN) repeated as African champion by taking the gold medal at 61kg. Last year his title came at 57kg. Diatta was dominant in the early rounds, picking up two 10-0 technical falls. In the finals he faced Ahmed MOHAMED (EGY). Diatta held a 1-0 lead after the opening period, but pulled away in the second period to win 11-5.

John won his title by stopping returning champion Maher GHANMI (TUN) in the gold-medal match at 70kg. The two wrestlers traded takedowns in the opening period, with John scoring last.  In the second period John scored with a step out and takedown to win 5-2.

Tamarau, an Olympian, won his second African title in dominant fashion, earning a technical fall over Martin ERASMUS (RSA) in the gold-medal match at 97kg. 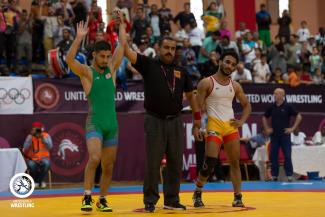 Olympian Chakir ANSARI (MAR) cruised to the gold medal at 57kg, picking up three falls and a 13-4 victory. 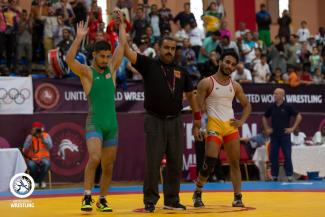