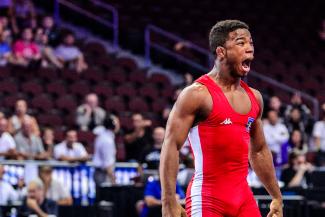 Chamizo outscored four opponents, 48-5, with a display of power, quickness and flexibility that has become his trademark, notching four technical falls on his way to 65kg final in freestyle.

Chamizo will meet European Games bronze medalist Mustafa KAYA (TUR) in the gold medal match – a rematch of their quarterfinal encounter last summer in Baku where he took the silver medal. Kaya needed a late double-leg takedown for four points to defeat Yargyin Grand Prix winner Israil KAZUMOV (RUS), 8-6, in the semifinals to earn his place opposite Chamizo. 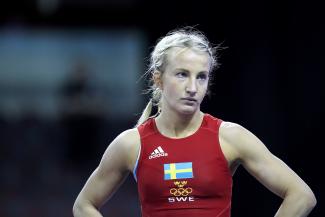 Mattsson, meanwhile, racked up three wins by fall Wednesday morning to book her place in the women’s 53kg final opposite Irina KURACHKINA (BLR), a silver medalist at the inaugural European under-23 championships in Poland last March.

Kurachkina will try to improve on her loss to Mattsson at last month’s Klippan Open in Sweden. Mattsson won that encounter by technical fall, 10-0, in 2:14.

Another winner and runner-up from the Las Vegas 2015 world championships will meet in the women’s 60kg final – when champion Oksana HERHEL (UKR) takes on the silver medalist at 58kg Petra OLLI (FIN).

Herhel held on for a 2-2 criteria victory over London 2012 bronze medalist Yulia RATKEVICH (AZE) in the semifinals while Olli posted a pair of technical falls to book her place in the finals. 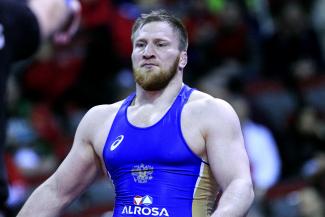 In the day’s fourth and final event, Yarygin Grand Prix winner Anzor BOLTUKAEV (RUS) came out on top of most of the scrambles to fashion an 8-5 victory over London 2012 silver medalist Valerii ANDRIITSEV (UKR) to advance to the 97kg finals.

Boltukaev also rolled up a 12-0 technical against European Games silver medalist Elizbar ODIKADZE (GEO) in the quarterfinals and will face 2014 European bronze medalist Ivan YANKOUSKI (BLR) in the final.

Yankouski’s run to the final was kicked off when he received an forfeit from London 2012 gold medalist Sharif SHARIFOV (AZE), who reportedly dislocated his shoulder while warming up for the day’s competition. 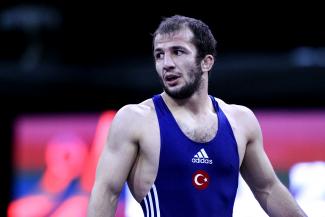