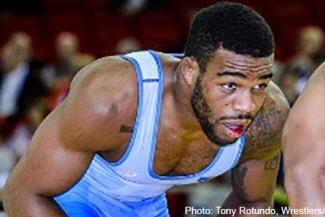 The longest winning streak in international wrestling has come to an end.

Jordan Burroughs, an Olympic champion and two-time World champion, suffered the first defeat of his international wrestling career on the senior level on Saturday. The American wrestler lost in the quarterfinals of the Yasar Dogu International to fellow American, Nick Marable via criteria, 4-4.

Burroughs' was wrestling in his first competition since winning a gold medal at the 2013 World Championships in September.

Burroughs’ loss sparked an outpouring of affection for arguably the sport’s most popular personality. Fans took to Twitter and Facebook to send their best wishes to the champion wrestler. His wife Lauren Burroughs, who is currently pregnant with the couple’s first child, also sent her husband some support.

“When a streak ends I think everyone tends to see the end of it and not the life of it. Baby and I are so proud of you @alliseeisgold!”

“He is a great champion who put together an impressive winning streak. Burroughs has made every wrestling fan proud,” said Lalovic.

Mr. Lalovic also interpreted the news of Burroughs’ loss as a positive message about the strength of the sport. “The interest in his accomplishment shows that we have a growing base of fans around the world.”

USA Wrestling executive director Rich Bender said, “We are incredibly proud of Jordan Burroughs.  He is not only one of the greatest competitors in our sport's history, he continues to be one of our greatest ambassadors.”

Winning streaks like Burroughs’ are rare in international wrestling. The most famous winning streak in the sport’s history was the 13-year run of three—time Greco-Roman Olympic champion Alexander Karelin (RUS), who had his streak snapped by Rulon Gardner in the 130kg gold medal match of the 2000 Olympic Games in Sydney.

Though Burroughs’ streak was marked by gold medals, the streak was only quantifiable due to updated record keeping by the national and international governing bodies of wrestling. Other notable streaks: Sergei Beloglasov (USSR)1980-84; Yasar Dogu (TUR) 1946-51, Arsen Fadzaev (USSR) 1981-86; and Alexander Medved (USSR) 1966-72 were likely as long, or longer, but advanced records weren’t kept until the early 90’s.

Will there be another streak? Mr. Bender doesn’t know, but he does believe his country is fortunate to have such depth at 74kg.

“The streak, which itself is one of the more amazing accomplishments in recent history, has also proven Jordan's incredible focus, drive, and commitment. I'm confident Jordan is now already preparing for the next streak.  It is fitting that this streak was ended by another American – it’s a testament of the depth of the US Program at 74kg.

Burroughs, who is the top-ranked 74kg wrestler in the world wrestled back to earn the bronze medal with a 10-2 victory over Batuhan DEMERCIN (TUR).

Marable would go on to win the Yasar Dogu title, defeating Morteza Rezae GHALEH (IRI) in the finals, 4-3. Last week, the Missouri-native captured his first title of the year winning the Golden Grand Prix of Paris.

Marable, who before last weekend did not hold a world ranking, is currently on a 10-match winning streak.