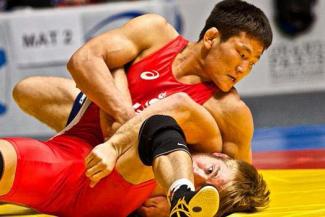 But in-between it was business as usual. Armenia added a pair of gold medals in Greco-Roman for the team title in the classic style while Azerbaijan got another gold to finish second behind host Germany for team honors in men’s freestyle.

In freestyle, European champion Ruslan DIBIRGADZHIYEV (AZE) eased his way to the title at 70kg to give Azerbaijan its fourth gold medal of the tourney. Azerbaijan’s 40 points, however, were well shy of Germany’s 112, which won without a champion but multiple medal round finalists.

At 125kg, 2011 world champion Aleksey SHEMAROV (BLR) schooled Soslan GAGLOEV (SVK) on the dangers of the gut wrench, rolling up five on his way to a 13-2 technical fall in the championship final.

In Greco-Roman, world bronze medalist Tinaliev raced out to a 7-1 lead in the 130kg final against Kiril GRYSHCHANKO (BLR) – mostly on force-outs – but had to hold on over the final 90 seconds as the Ivan Poddubny bronze medal winner closed to 8-6 before time ran out.

For Armenia, world bronze medalist Roman AMOYAN (ARM) won his second title of the year since returning to competition at 59kg in May and Varsham BORANYAN (ARM) won his first-ever international event at 71kg.

With six champions, Armenia won the Greco-Roman team title with 75 points. Belarus followed with 67 points and Turkey and Germany with 56 points.